Expectations tend to seep into investment decisions. Not always in a good way.

Take the return expectations from a recent study by Schroders:

15.38% seems awfully specific. Maybe the U.S. stock market hits that mark over the next five years, but it’s eerily similar to returns over the last five years. From 2o16 to 2020, the S&P 500 earned an annual 15.22% total return. So recency bias may play a role. And with the S&P 500’s historical return closer to 10%, I think it’s safe to say those expectations are over-optimistic.

A safer assumption for future returns would be achieved with a formula John Bogle devised. Bogle’s simple formula looks like this:

The speculative return is measured by the change in the P/E ratio. It measures the change in how much the market is willing to pay for $1 of earnings. Which rises and falls with investor sentiment.

Here’s how Bogle describes it:

This remarkably simple numeric approach of separating enterprise and speculation — i.e., investment return and speculative return — has been borne out in practice… Decade after decade over the past century, we can account, with remarkable precision, for the total returns actually earned by U.S. stocks. 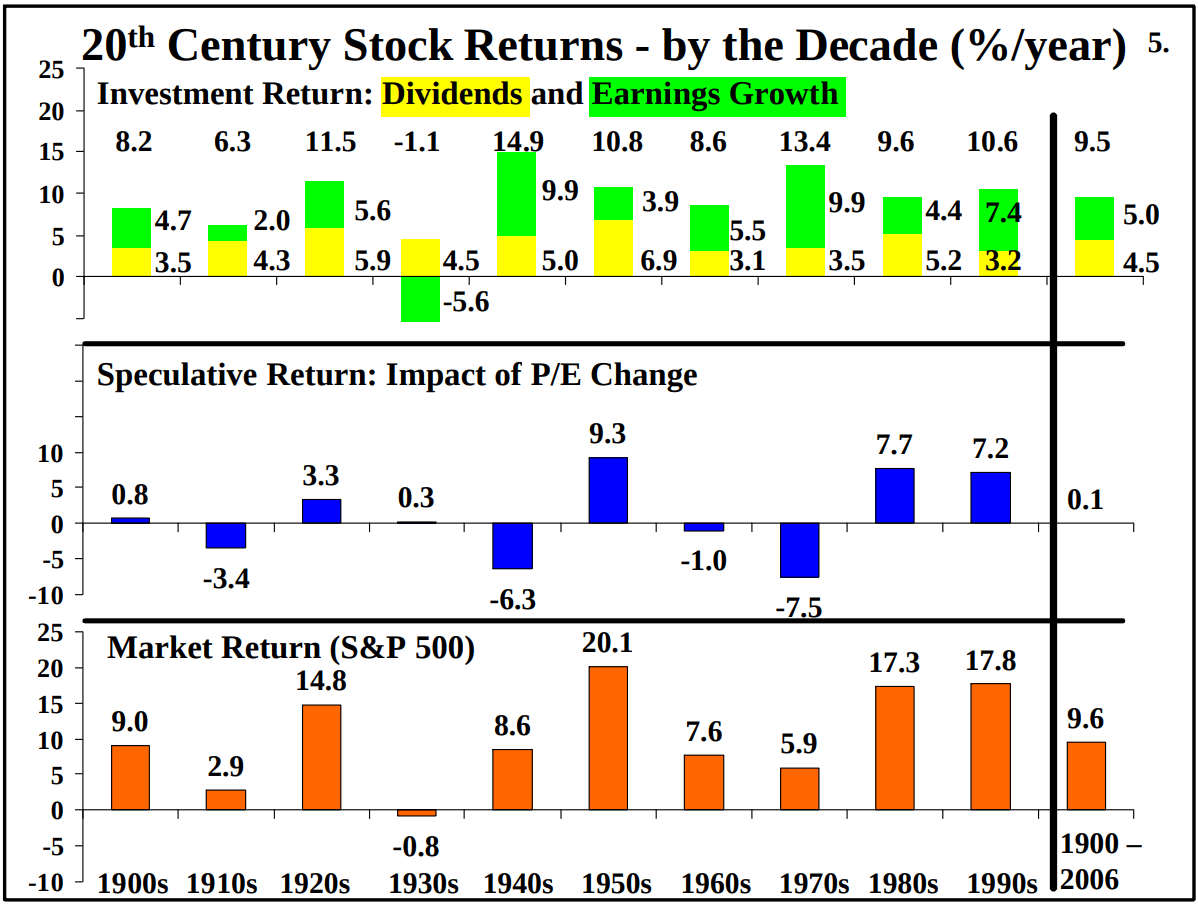 The investment return on stocks (top line) proves to be remarkably susceptible to reasonable expectations. The initial dividend yield — a crucial — but underrated — factor in shaping stock returns — is a known factor. And the steady contribution of dividend yields to investment return during each decade has always been a positive, only once outside the range of 3 percent to 5 percent. The secular rate of earnings growth on the other hand, while hardly certain, is relatively stable. There were no long-term Black Swans in investment returns, and even the sharp earnings drop in the Great Depression was but a 2-Sigma event (meaning within the 95 percent probability range).

Note that, with the exception of the depression-ridden 1930s, the contribution of earnings growth was positive in every decade, usually running between 4 percent and 7 percent per year. Total investment returns were only once (again, the 1930s) less than 6 percent annually, and only twice more than 11 percent. But if we recognize that corporate earnings have, with remarkable consistency, grown at about the rate of the U.S. Gross Domestic Product, this relative consistency is hardly surprising.

Speculative return is, well, speculative, and has alternated from positive to negative over the decade… In fact, if P/E ratios are historically low (say, below 10 times) they have been likely to rise over the subsequent decade. And if they are historically high (say, above 20 times) they have been likely to decline (though in neither case do we know when the change is coming). Nonetheless, certainty about the future never exists, nor are probabilities always borne out. But applying reasonable expectations to investment return and speculative return and then combining them has been a sensible and effective approach to projecting the total return on stocks over the decades.

The point is this: Over the very long run, it is the economics of investing — enterprise — that has determined total return; the evanescent emotions of investing — speculation — so important over the short run, have ultimately proven to be virtually meaningless. In the past century, for example, the 9.6 percent average annual return on U.S. stocks has been composed of 9.5 percentage points of investment return (an average dividend yield of 4.5 percent plus average annual earnings growth of 5 percent), and only 0.1 percent of speculative return, borne of an inevitably period-dependent increase in the price-earnings ratio from 10 times to 18 times, amortized over the century.

The nice thing about Bogle’s formula is it’s simple enough that anyone can use it. It’s also not meant to be perfect. It’s a guide for setting expectations with the understanding that the speculative element plays a bigger role in returns in the short run and will make any forecast look wrong. But over the long run, speculative returns tend to cancel out. In other words, the very long-run returns of the market track dividend yield plus earnings growth, and short term deviations revert back to that.

The range of 5.6% to 8.6% is a far cry from 15%. Feel free to fiddle with the numbers however you like but a conservative starting point makes for smarter investment decisions. I believe it’s better to underestimate and overdeliver than to overestimate and experience the downside of falling short on returns. The speculative element will play a role, so keep in mind, as Bogle warned, that historically high P/E ratios generally lead to negative speculative returns.

What about bonds? Thankfully, bond returns are easier to estimate because starting bond yields are fairly correlated to actual bond returns (with the exception of the junkiest bonds). The 10-Year Treasury current yields 1.15%.

So a 50/50 portfolio suffering from a U.S. home bias has an expected return in the range of 3.4% to 4.8%. That’s not much to look forward to over the next ten years. It’s also not set in stone. Investors have more choices than the S&P 500 and 10-year Treasuries that might raise expected returns slightly. For instance:

The important point is that assuming what has happened in the recent past will continue in the future is the wrong approach to investing. 15% returns out of the S&P 500 was fun over the last five years, but that party won’t last forever. Markets have a knack for crushing overly optimistic expectations.