In 1981, Pension & Investment Age magazine published their regular report ranking investment performance for pension plans. Alone at the top was a tiny bank based out of Chillicothe, Missouri.

Citizens Bank & Trust led the list of every bank- and insurance-managed pension fund for the 3-year performance mark. More importantly, it led the same list for the 10-year mark. How does a tiny bank in farm country Missouri beat out the biggest banks and insurance companies in the country for a decade?

The answer is Edgerton Welch. Welch was the 72-year-old chief investment officer for the bank who had never heard of Ben Graham or modern portfolio theory. He admitted to not being smart enough to play the stock market. He even said he had no idea if it would go up or down. Instead, he had a copy of Value Line and a simple set of rules to guide him.

Welch bought all the stocks that had Value Line’s highest ranking relative to other stocks, in industries ranked highly by Value Line, and also highly rated by Merrill Lynch and E.F. Hutton, the two brokerage firms he used. He held onto each stock until its Value Line ranking dropped. At which point he sold. Three rules tied to buying, one for selling. That’s it.

Some may point to the simplicity of Welch’s strategy as the reason for its success. They’re partially right. END_OF_DOCUMENT_TOKEN_TO_BE_REPLACED 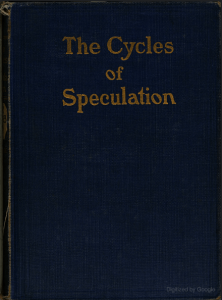 Thomas Gibson’s 1909 classic breaks down the market cycles of the 1800s, the speculative behavior behind them, and the typical errors speculators make each step of the way.

END_OF_DOCUMENT_TOKEN_TO_BE_REPLACED

And yet, Lynch made mistakes. He jokingly admits to it often. He just did mistakes better than most investors too. Lucky for us, he had a knack for simplifying the difficulties of investing.

His ability to cut to the heart of what it takes to make money, in the long run, is refreshing. And yet it’s still mostly ignored because the riches don’t come quick enough.

As a guest on Wall Street Week, in 1990, he explained why patience is key. It was one of several common mistakes he covered during the segment. Be it market timing, predictions, not knowing what you own, or lack of effort, the mistakes are universal. Lynch’s take is a good reminder of the trouble we can get ourselves into at times. END_OF_DOCUMENT_TOKEN_TO_BE_REPLACED The 1922 investing classic offers an introduction to new investors and sits as a reminder that the basic investment principles have remained the same over the past century.

END_OF_DOCUMENT_TOKEN_TO_BE_REPLACED

Charlie Munger is the lessor known half of the partnership team that built Berkshire Hathaway. Prior to that, he was a lawyer, before giving up law to run his own investment partnership.

He started Wheeler, Munger & Company in 1962. The partnership was wound up in 1975. Back-to-back 31% losses in 1973 and 1974 made investors squeamish and in need of capital. Yet, despite the losses, Munger outperformed the market, earning a 19.8% annual return over the 14-year period (compared to 5% for the Dow).

Munger teamed up with Warren Buffett three years later (1978) as vice chairman of Berkshire. In his spare time, he chairs the Daily Journal, designs buildings, and plays the part of a walking, talking encyclopedia. He’s a learning machine who built his own system of mental models to reduce errors in this complex world. His unique view of uncommon sense, as he calls it, can be seen in how he invests.

Except, extreme concentration is not for everyone. First, finding a handful of wonderful companies worth owning is never as easy as it sounds. Someone not skilled in the art is likely to find awful companies more often than wonderful ones. END_OF_DOCUMENT_TOKEN_TO_BE_REPLACED

Purposely losing money in the stock market seems like it should be an easy task. It turns out it takes some luck to lose money in the market. The same goes for making it.

Whereas the lottery is pure luck. It’s a random draw. You can pick a series of numbers and hope to lose but there’s always a chance you get lucky and win.

Investing falls somewhere in between pure skill and pure luck because the amount of noise in the system makes it hard to lose (or win) on purpose in the short run.

A good example of this is an interesting experiment run by John Rogers and his team several years ago: END_OF_DOCUMENT_TOKEN_TO_BE_REPLACED