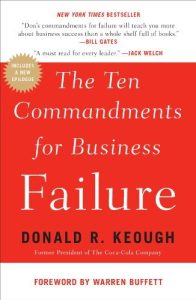 There is no secret formula for business success. Donald Keough inverts the question “How to succeed in business?” He looks back on numerous mistakes in his sixty-year career and identifies common factors that led to business failure so you avoid the same fate.

END_OF_DOCUMENT_TOKEN_TO_BE_REPLACED

Some of the greatest businesses are defined by the chances they take to prevent the business from becoming stagnant. We see the successes but it’s the little failures along the way that drive their success.

That willingness to fail plays an important role in a business’s survival. In fact, the opposite often seals a company’s demise.

Creative destruction is a natural process that wipes out companies all the time. Complacency does too. Some of the greatest companies of the last century disappeared because management found unique ways to rest on their laurels.

The company finds early success doing something different, grows to an immense size, and becomes an industry leader. After a few decades, management becomes arrogant, complacent, and comfortable. Bureaucracy creeps in. Before they know it, some new upstart, more willing to take risks, has passed them by.

Sears, Xerox, and Kodak are three examples from a long list of once-great companies where management quit taking risks. They avoided the uncomfortableness of failure and ceased to stay relevant. END_OF_DOCUMENT_TOKEN_TO_BE_REPLACED 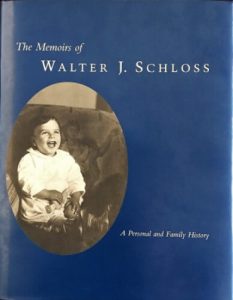 Walter Schloss shares stories and lessons from his life growing up in New York, getting his first job on Wall Street, enlisting in WWII, returning to work for Ben Graham, and successfully running his own partnership for 47 years.

END_OF_DOCUMENT_TOKEN_TO_BE_REPLACED

Anyone who got the investing itch in the ’80s or ’90s followed Peter Lynch at some point. He was the last star mutual fund manager — who left the game early and for the right reasons. Lynch played at a higher level than everyone else.

One of the best examples of this, that I’ve come across, was in the 1988 Baron’s Roundtable discussion. Ten fund managers gathered in the same room to start the year. You might recognize a few — Mario Gabelli, Paul Tudor Jones, John Neff, Michael Price, Jim Rogers, and, of course, Peter Lynch.

It’s three months after the ’87 crash. They’re jittery. They argue about what’s next for the economy, oil prices, interest rates, inflation, trade deficit, and the stock market. Six hours of “what if there’s a recession or another crash?” Basically, the crap you hear on CNBC every day.

And then there’s Lynch — I picture him sitting quietly, smirking. Finally, he interrupts:

Lynch took a shot at the Roundtable itself and made his point. There’s always something to worry about in investing. But it’s a waste of time and energy because we won’t predict it correctly. END_OF_DOCUMENT_TOKEN_TO_BE_REPLACED 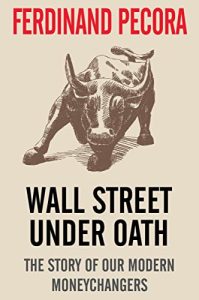 Ferdinand Pecora was the counsel for the Senate Committee on Banking and Currency investigation in 1933. His book lays out its findings on the widespread speculative, and manipulative, stock market practices leading up to 1929 and the market crash that followed.

END_OF_DOCUMENT_TOKEN_TO_BE_REPLACED

The rise in popularity of new financial products often coincides with the rising popularity of stocks. And if one takes off, you’re bound to get more.

The first trust of any significance was created in the U.S. in 1924. One of the main selling points was the benefit of a professional investing your money for you. As the 1920s rolled on, another point emerged on how trusts would be a stabilizing force for the stock market during a decline.

Trusts were not an immediate hit. Only $175 million were in investment trusts in 1927. That all changed within a year. The number jumped to $790 million in 1928. Then it hit $2.25 billion in 1929 and represented 22% of all stock issues. In fact, the number of investment trusts more than doubled from 172 at the start of 1929 to over 400 by the end of August of the same year. And more investment trust securities were offered in September 1929 than in August.

But the love affair investors had with investment trusts was short-lived. Like many investment fads, there are always a few bad apples that spoil the bunch. Of all the investment trusts, one stands out as the most egregious. END_OF_DOCUMENT_TOKEN_TO_BE_REPLACED