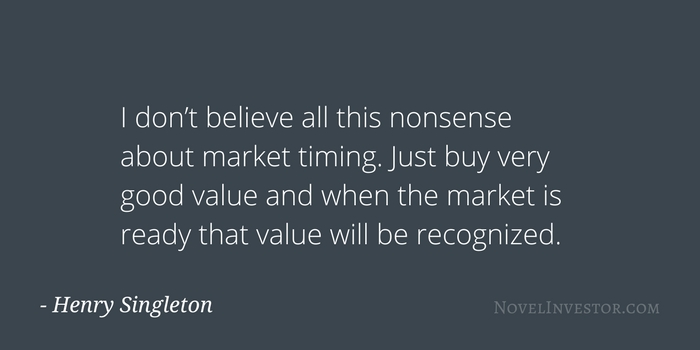 Henry Singleton is known as one of the best capital allocators ever. He took advantage of the market’s enthusiasm for Teledyne shares during the late ’60s conglomerate craze to buy up companies.

And when the market turned and Teledyne’s stock sank, he bought all the shares back.

In October 1972 we tendered for 1 million shares and 8.9 million came in. We took them all at $20 and figured that was a fluke and that we couldn’t do it again. But instead of going up, our stock went down. So we kept tendering, first at $14 and then doing two bonds-for-stock swaps. Every time one tender was over the stock would go down and we’d tender again and we’d get a new deluge.

Singleton’s process is something every CEO can learn from (not enough follow correctly). It’s a lesson for investors too.

From the few articles and interviews floating around, you can tell Singleton looked for value.

I don’t believe all this nonsense about market timing. Just buy very good value and when the market is ready that value will be recognized.

His goal was to diversify enough so that no one company could bring all of Teledyne down. Then he cut the losers and let the winners run.

The principal reason is the natural desire of companies to survive. If you remain in one single line, you will not survive. Everything has its day. You can’t wait to see what is going to replace what you are doing.

Concurrent with the instinct for survival is the desire to grow. If you want to grow — the purpose being clearly to increase the company’s strength and give it greater potential for survival — this can be accomplished by having a number of lines and phasing out the old ones as time goes by. I’m talking about the long term.

He looked for good companies rather than trying to turn around beat up companies with bad management.

We’ve heard all that talk about synergy. Many of those companies are now down the drain. These types that buy badly managed companies and revitalize them and have instant profits. We never claimed that. We tried to buy good companies to start with. We don’t think there are supermen who can renovate them and transform them into wonderful, highly profitable enterprises.

We can’t do it, and history shows that nobody else can do it either.

He wasn’t worried about earnings. He wanted cash flow.

Our attitude toward cash generation and asset management came out of our own thought process. It is not copied. After we acquired a number of businesses we reflected on aspects of business. Our own conclusion was that the key was cash flow.

If anyone wants to follow Teledyne, they should get used to the fact that our quarterly earnings will jiggle. They will reflect the real world. Our accounting is set to maximize cash flow, not reported earnings. Smoothing reported earnings just has to take a backseat.

And when the companies he wanted to acquire were too expensive, he looked for value elsewhere.

In this climate, where tender offers mean overpaying by managements which want to grow at any price, I prefer to buy pieces of other companies or our own stock or expand from within. The price for buying an entire company is too much. Tendering at the premiums required today would hurt, not help, our return on equity, so we won’t do it.

There are tremendous values in the stock market, but in buying stocks, not entire companies. Buying companies tend to raise the purchase price too high. Don’t be misled by the few shares trading at a low multiple of 6 or 7. If you try to acquire those companies the multiple is more like 12 or 14. And management will say, ‘If you don’t pay it, someone else will.’ And they are right. Someone else does. So, it’s no acquisitions for us while they’re overpriced. I won’t pay 15 times earnings. That would mean I’d only be making a return of 6% or 7%. I can do that in T-bills.

His stock-picking led him to beaten down stocks with a “problem” in industries he understood.

It’s good to buy a large company with fine businesses when the price is beaten down over worry about one problem… To me it was hard to believe the heads of a $3 billion or $4 billion business would not be able to handle one business problem.

He believed hard work, consistency, and patience matter more than IQ (without the former the latter is wasted and you don’t need the latter for the former to payoff).

There are so many people who have done extraordinary things who don’t have so much intelligence. They just keep plugging away. I have a great deal of patience to continue to work on projects for a long time. To stay with it is what is helpful.

We’ve seen what happens to companies whose chief executive gets the best press. They are often the ones who end up with the least profits.

We’re doing what we’ve always done. I’ve never been a person who vacillates back and forth with the ups and downs of the economic cycle.

If others don’t agree with what we’re doing, we’ll just have to let the future determine who is right and who is wrong.

He knew flexibility was the best way to deliver shareholder value.

I know a lot of people have very strong and definite plans that they’ve worked out on all kinds of things, but we’re subject to a tremendous number of outside influences and the vast majority of them cannot be predicted. So my idea is to stay flexible.

I believe in maximum flexibility, so I reserve the right to change my position on any subject when the external environment relating to any topic changes, too.

Source:
Teledyne: Threat to the Establishment – Forbes
The Sphinx Speaks – Forbes
As They See It – Forbes
The Singular Henry Singleton – Forbes
What Makes Tycoons Tick – Nation’s Business
The Outsiders: Eight Unconventional CEOs and Their Radically Rational Blueprint for Success