Reminiscences of a Stock Operator originally began as a twelve article series for the Saturday Evening Post. Edwin Lefevre wrote the series over 12 months starting in 1922.

But when the first edition of the book was published, the first article was left out. The book begins with the eighth paragraph of the second article — “I went to work when I was a kid out of grammar school…” At least, the version I read began that way (can’t speak for other editions).

Lefevre sets the stage for the book in the first article. He begins with a great line:

The market was so weak that you could see customers counting their dead hopes.

The narrator goes to visit an old friend at a brokerage firm. While there, stocks start crashing. The narrator overhears his friend blame it all on Larry Livingston. He must be raiding the market.

But the narrator didn’t believe him, so he sets out to ask Livingston himself. An introduction is made. A meeting is set.

The first of many conversations begin with a rant by Livingston. He offers a lesson on the perils of trying to get rich quick and expecting a better return than the market will offer. Here’s how the conversation went: 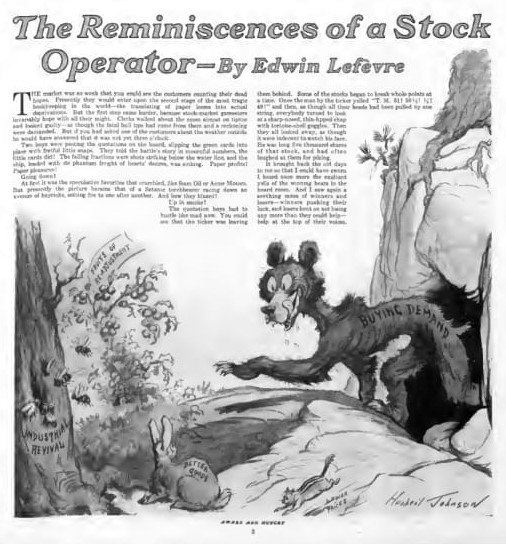 “I never raid the market,” he said quickly. “It would be useless. The market raids itself when a lot of people suddenly discover that they ought to have sold out ten points higher, or when a lot of insiders dispose of stocks they couldn’t land the public with, or when brokers have loans called on them. But they always blame it on the bears. As a matter of fact, a bear market is 100 percent legitimate. It begins without the need of manipulation or thimblerigging, and it continues without having to be nursed. No man or set of men can smash a market day after day. I might raid the market once. But what good would that do me? It won’t stay down if it isn’t a bear market; and if it is a bear market I don’t have to raid it, do I?”

“Personally I’d rather play on the long side. It is constructive, and it is much nicer to share your prosperity with others. The public does not take kindly to short selling. For one thing, it is easier to be optimistic, to believe what it pleases a man to believe. And then, as I said, everybody boosts a bull market, bankers and suckers alike. Nobody speaks about the misdeeds of the bulls or the misstatements of insiders about their companies. Bull tips are mostly anonymous. I have an idea that if the papers published only signed bull dope there would be much less money lost by the public. Fix the responsibility. But don’t talk about bear raids as though they really were the cause of the declines.”

“I don’t think anything anyone can do will help a man in whom greed takes the place of gumption,” I said.

He nodded — the kind of perfunctory nod a man gives when he has only half heard but isn’t interested enough to ask for a repetition. His next word proved it.

“I am tired,” he said, “of hearing the public and the papers blame Wall Street for parting fools from their money. Take the biggest losers. They are not the piker suckers, who only lose what they risk — pennies. It’s the successful business man, the shrewd merchant, who is the biggest sucker of the lot. He has made a fortune in his own line? How? By being on the job for years; by learning all there was to know about it; by taking reasonable chances; by utilizing his knowledge and experience to anticipate probabilities. He wants to increase that fortune at a faster rate and with less effort. He decides to make his money work for him — at high wages. He assures himself that as he is taking the risk of losing every cent he puts up it is only fair to make more than his usual profit. Why, that man doesn’t lose his money in Wall Street. He loses it in his own office. It isn’t the game that beats him; he beats himself. Am I right?”

He looked as if he really wished to hear my opinion, so I said, “Absolutely!” It was one of my own favorite points.

“That man expects to make money in Wall Street by using methods he wouldn’t dream of using in his own business. That is why legislation can’t help much, because it can’t keep a man from wanting to get something for nothing. If all the so-called abuses were suppressed and the public protected against crooks and against its own greed and ignorance, so that nobody could lose money, who in blazes could make money? If everybody bought at the bottom, from whom would he buy? Who would sell?”

“Precisely. That’s one point all the investigating committees overlook,” I said.

He went on earnestly:

“The sucker play is always the same: To make easy money. That is why speculation never changes. The appeal is the same: Greed, vanity, and laziness. The merchant who would not dream of buying and selling stockings or percales on the advice of fools goes to Wall Street and cheerfully risks his money on the say-so of men whose interest is not his interest, or tipsters who have not grown rich at the game they want him to play. He thinks his margin will take the place of brains, vision, knowledge, experience and of intelligent self-surgery. Whether the stock market goes his way or against him, his hope is always fighting his judgment — his hope of gaining more that keeps him from taking his profits when he should; his hope of losing less that keeps him from taking a relatively small loss. It is a human failing!”

Source:
The Reminiscences of a Stock Operator, Saturday Evening Post