The late 1920s market bubble was one of the biggest bubbles U.S. markets ever saw. Yet, not all industries participated in it. A breakdown of how each industry performed over that period tells the tale.

The Cowles Commission started collecting market data in 1932. The data is available online (linked below), stretches from 1871 to 1937, and is broken down by industry.

A chart of the 1929 bubble and burst looks like this: 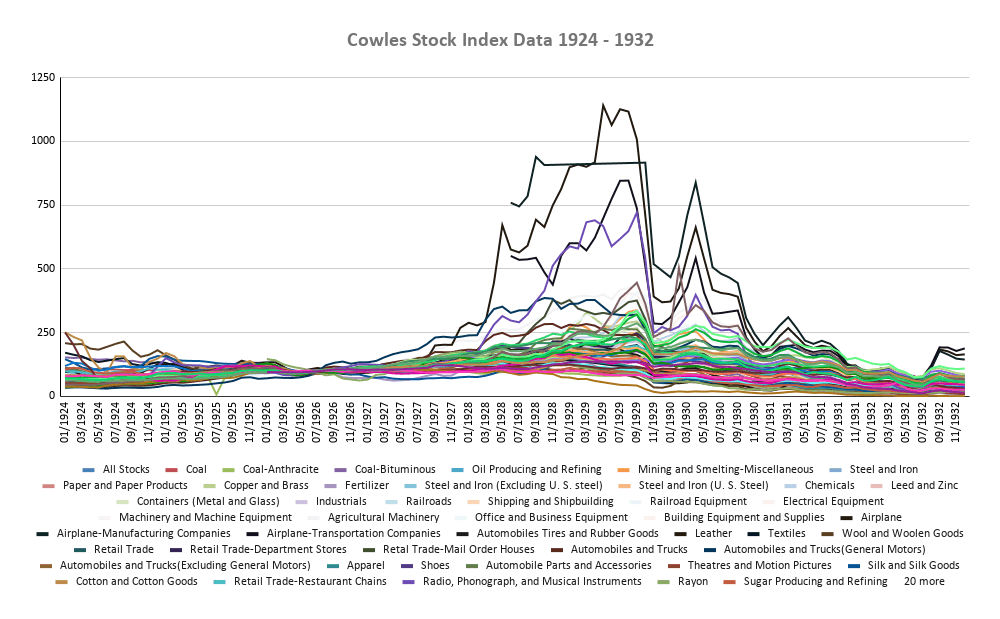 The data is price returns only — no dividends included.

The chart is a hot mess (done so on purpose). It’s also incomplete. For instance, the financial industry, along with investment trusts are missing from the picture. That said, it does show just how few industries were inflated at the time. 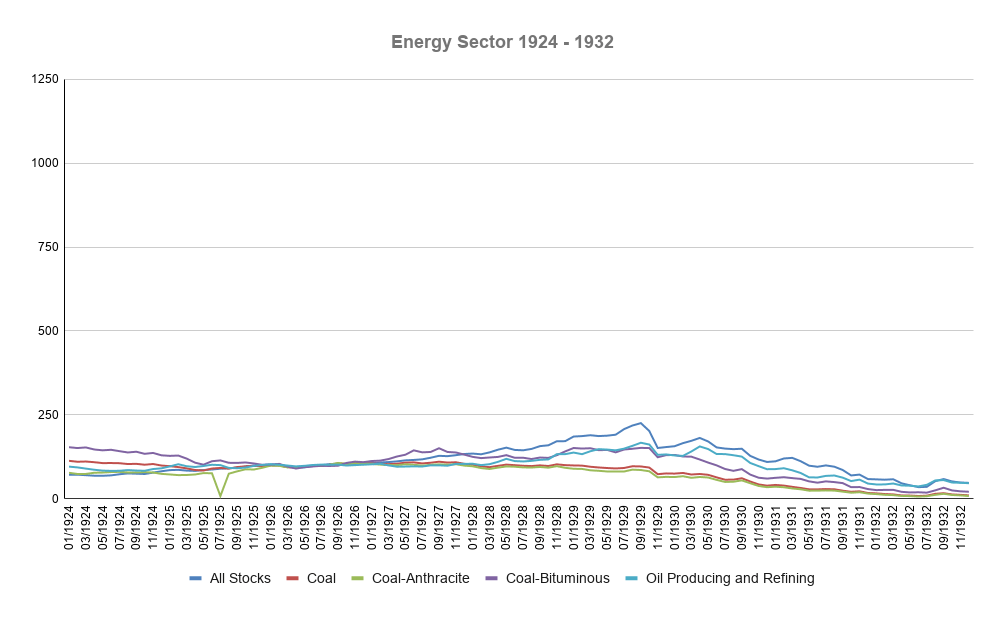 There’s not much to see there. The energy stocks underperformed the “all stock” index. Anyone who bought a basket of coal stocks at the start of 1924 was sitting at a loss at the September 1929 peak. By the time 1932 ended, coal stocks were down 91%. 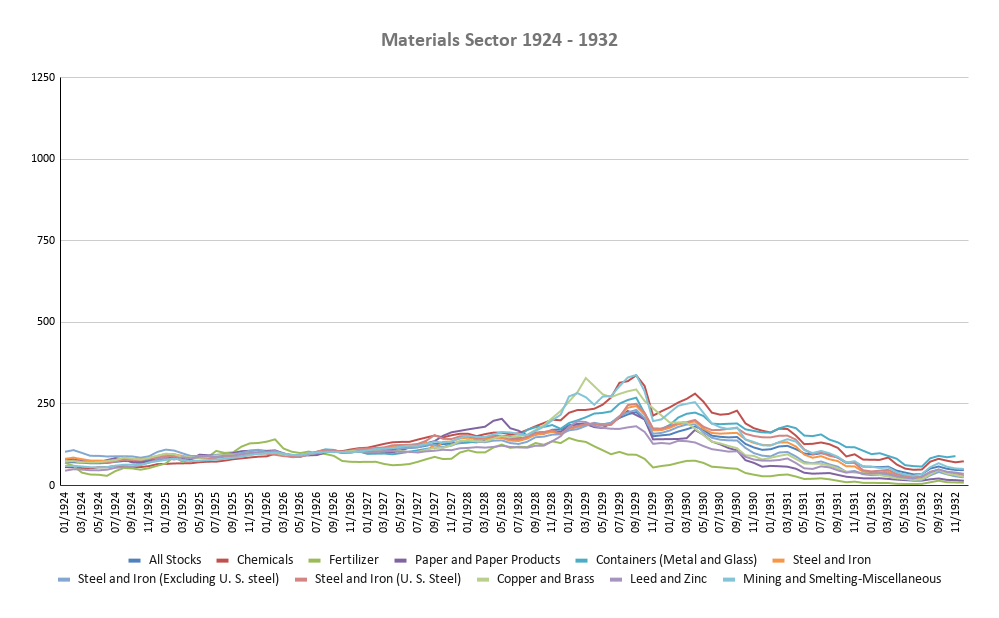 Next up are the Industrials stocks. 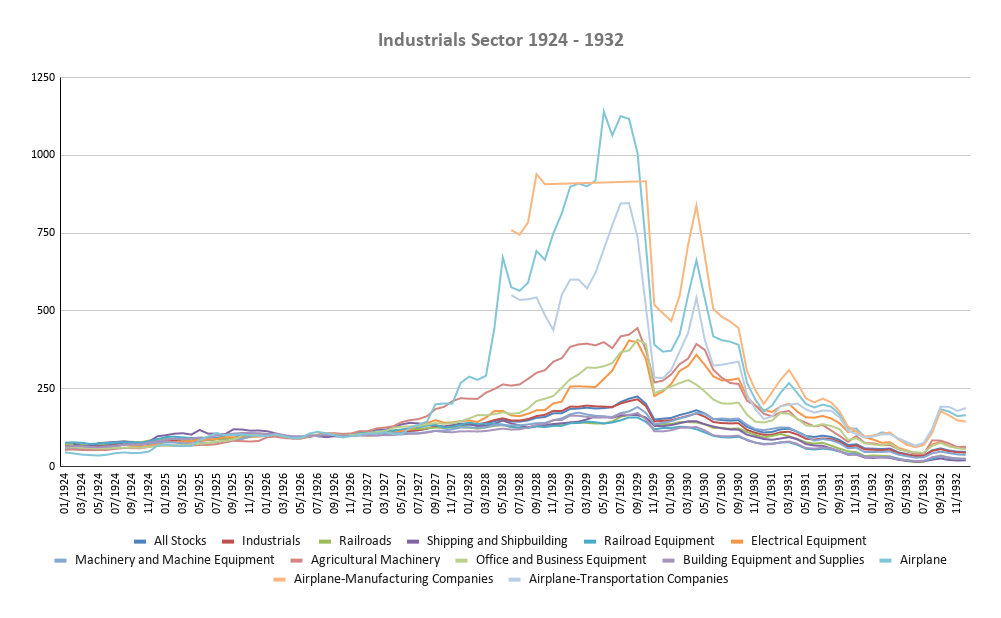 Two other notable industries stand out. Electrical Equipment and Agricultural Equipment were the only other industries with a positive return from 1924 to 1932 — 6% and 18% respectively. Both were up over 600% at the September 1929 peak.

Lastly, peak to trough losses across all industries was horrible again — ranging from -74% to -89%.

Consumer Discretionary is broken into two charts. First up is consumer durables. 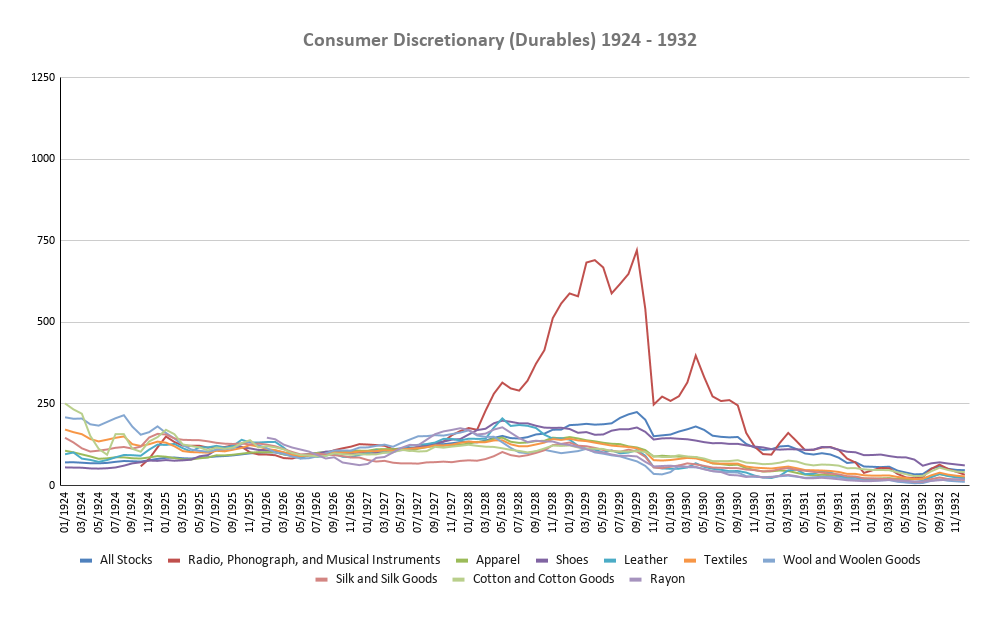 Here’s the rest of the Consumer Discretionary stocks. 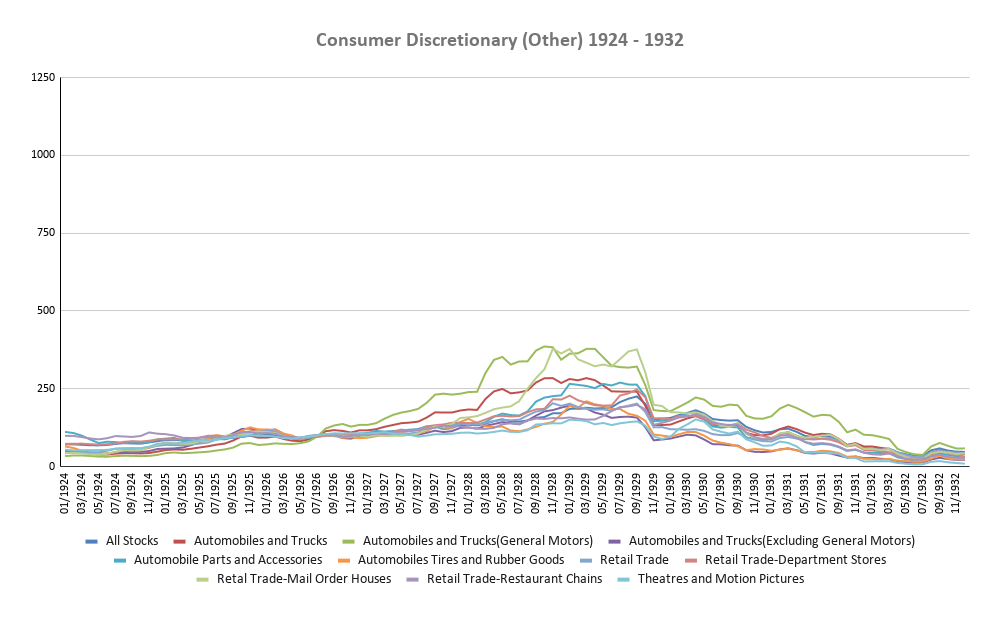 Auto stocks excluding GM only saw a gain of 459% to the peak and a loss of -74% over the entire period. GM was also included in the major market indexes at the time, which contributed to their rise.

Next up is Consumer Staples. 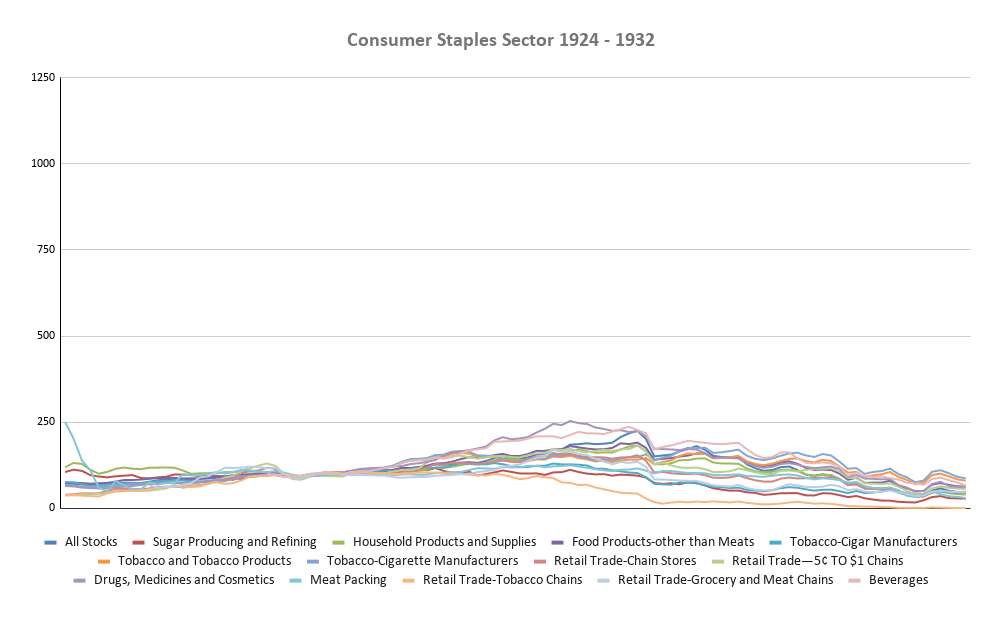 Generally, Consumer Staples are not exciting stocks. They just chug along through good times and bad. That’s mostly the case here too. A few things stand out though.

Sugar producers/refiners sat at a 10% loss from 1924 to September 1929, but the meatpacking industry really suffered — 54% loss over the same period.

On the other hand, tobacco and retail did well over the entire period. Cigarette manufacturers held a 30% gain and the old five and dime chain stores were up 50% from 1924 to 1932. Lastly, the peak to trough losses fell in a wider range of -41% to -97%.

Now for the Utilities. 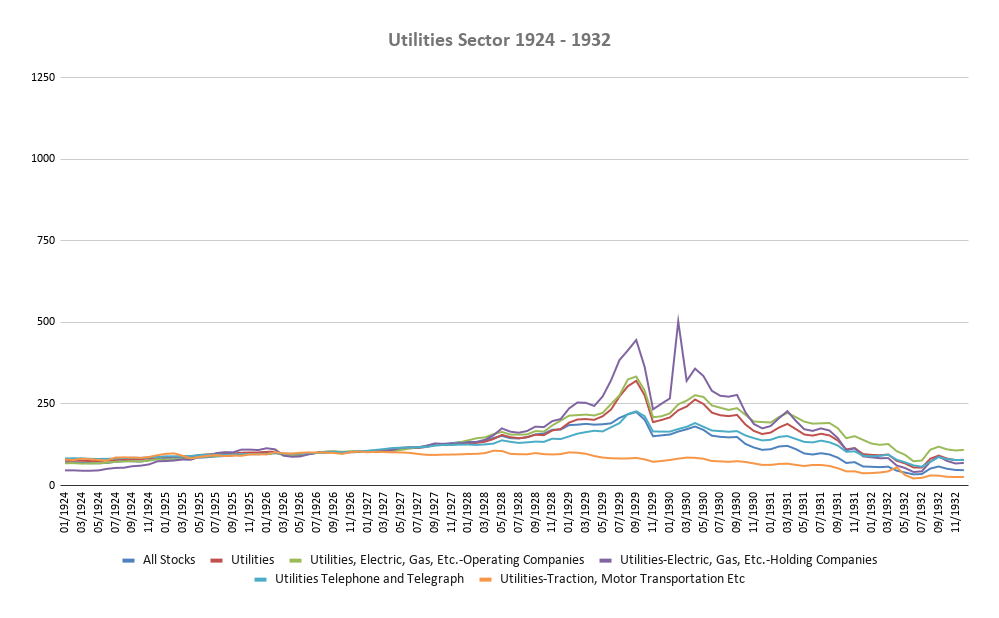 Electric/Gas utilities certainly were caught up in the bubble, but its performance overall was positive. The industry saw peak gains of 855% from 1924 to September 1929 and more than recovered after the ’29 crash. Over the entire period, it was up 48%. Again, peak to trough drawdowns for all industries ranged from -66% to -84%.

Finally, here are the last few industries that didn’t quite fit. 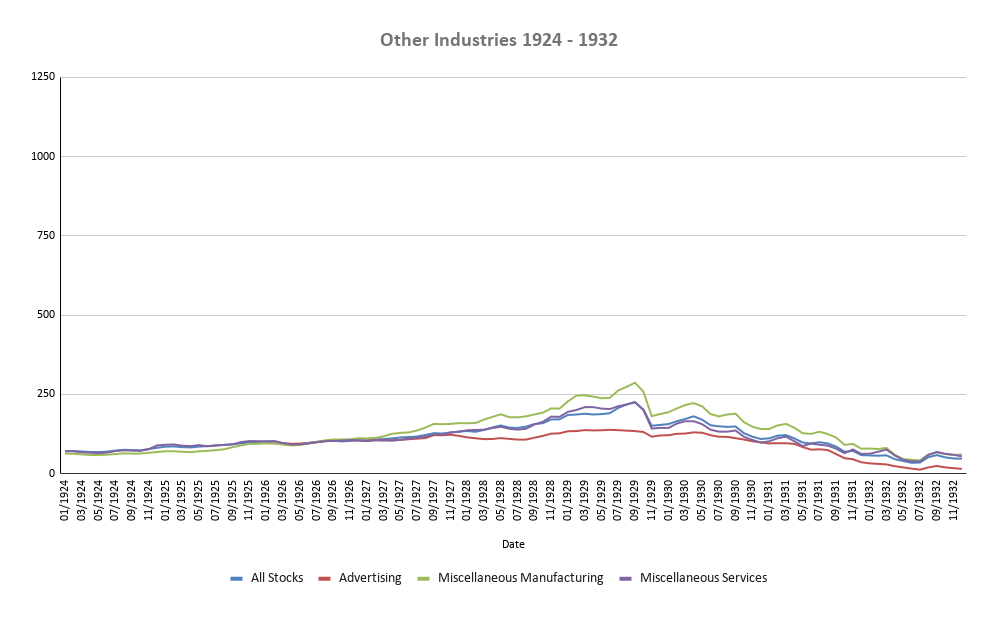 There’s not much to add really. Advertising industry stocks didn’t show up until 1926 and were only up 40% in 1929. All three industries experienced big losses from peak to trough — ranging from -76% to -89%.

To wrap it up. More often than not, market bubbles are due to the excitement around some new innovation. The fact that the companies behind it have no history to be dragged down by and a wide-open future make them more enticing. It certainly allows for a cleaner story behind them too.

The late 1920s bubble was unique. First, it didn’t take off until 1928. Second, three innovations — the automobile, airplane, and radio industries — dominated the bubble. All three were transformative on their own. And when the market crashed in 1929, those three industries were hit the hardest. But the 1929 crash didn’t entirely kill the excitement in those industries. Each one experienced a second spike in 1930 before the real meltdown began. It wasn’t until late 1932 that the innovation around airplanes got its second wind.

Lastly, a new financial innovation was introduced for the first time. The investment trusts fed the high demand for shares but also contributed to it, pushing stock prices higher.

Obviously, other industries were caught up in the euphoria but not nearly on the same level. For the most part, they recovered after the 1929 Crash too. It wasn’t until the country slid into a Depression that every industry got clobbered.