Before October 19, 1987, few people believed the stock market could fall 10% or more in a single day. The last time it happened was almost six decades earlier on October 29, 1929. That day is known as Black Tuesday.

Before Black Tuesday, the worst day was the day before — October 28, 1929. Two days of back-to-back double-digit losses were the only losses of 10% or more for the Dow prior to 1987.

Of course, those stats are a perfect example of the limits of market history — it can hinder our view of what’s possible. Anyone who woke up the morning of October 19th and believed a 10% loss was impossible was shocked by the closing bell.

The market closed with a 22.6% loss! Many believed it was only the beginning. More pain would come.

The SEC’s report on that day offers some insight into the crash:

Analysis of trading suggests that the initial decline that immediately preceded the October 19 market break was triggered by changes in investor perceptions regarding investment fundamentals and economic conditions. With these changes as the “trigger,” institutional stock selling was the largest single direct factor responsible for the initial opening declines on October 19. Finally, panic selling in a broad range of stocks — caused by a variety of factors — coupled with a complete absence of buyers (except at distressed levels), was primarily responsible for the free-fall decline that characterized the final hour of trading on the NYSE on October 19.

The crash was first blamed on program trading. “Computers caused it,” they said. When things go wrong, people focus on the immediate outcome, not long-term causes. They also tend to oversimplify. Markets are too complex to point to a single cause. Several factors were behind it but the program trading activity that day was a consequence of the panic.

Seth Klarman explained why blame missed the mark that day:

Whenever the stock market goes through one of its crashes or mini crashes, the search for an explanation immediately begins. The finger pointing has an overwhelming tendency to miss the mark, however. Partly, this is because the wrong questions are being asked and answered. People seeking answers to why the market plunged usually emphasize the immediate events that precipitated a selling panic, when in fact these events are but minor symptoms of much more severe underlying problems.

Many experts have identified program trading as a major cause of the stock market crash two years ago and of last Friday’s panic as well. While it is true that derivative securities such as options and futures divert capital away from real investments, program trading gets an undeserved bad rap in the aftermath of market crashes. Program trading is very straightforward arbitrage technique whereby professionals take advantage of discrepancies between actual stock prices and stock futures prices. 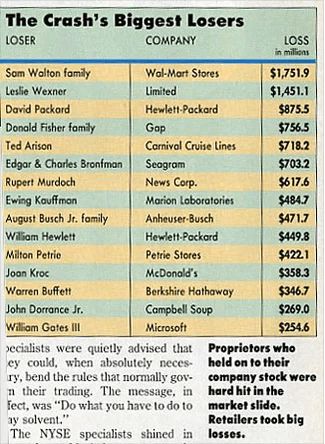 A month after the crash, Fortune ran a story on some of the biggest losers. The Waltons, Packard, Hewlett, Kroc, Gates, Buffett, and others watched hundreds of millions to billions of dollars wiped from their net worth.

Buffett didn’t panic over his $346 million hit. I doubt any of the other families on the list did either. And why would they? They all owned pieces of solid businesses, with earnings, and great prospects for future growth. One horrible day in the market wasn’t going to change that.

Mr. Market is a manic-depressive fellow who throws out crazy prices for shares in businesses. You can listen or you can ignore him. You can follow his lead or you can take advantage of his folly. It’s your choice.

Buffett alluded to the brilliance and brains of Wall Street and their ability to overcomplicate things with their reliance on portfolio insurance:

Ben’s Mr. Market allegory may seem out-of-date in today’s investment world, in which most professionals and academicians talk of efficient markets, dynamic hedging and betas. Their interest in such matters is understandable, since techniques shrouded in mystery clearly have value to the purveyor of investment advice. After all, what witch doctor has ever achieved fame and fortune by simply advising “Take two aspirins”?

The value of market esoterica to the consumer of investment advice is a different story. In my opinion, investment success will not be produced by arcane formulae, computer programs or signals flashed by the price behavior of stocks and markets. Rather an investor will succeed by coupling good business judgment with an ability to insulate his thoughts and behavior from the super-contagious emotions that swirl about the marketplace. In my own efforts to stay insulated, I have found it highly useful to keep Ben’s Mr. Market concept firmly in mind…

Many commentators, however, have drawn an incorrect conclusion upon observing recent events: They are fond of saying that the small investor has no chance in a market now dominated by the erratic behavior of the big boys. This conclusion is dead wrong: Such markets are ideal for any investor — small or large — so long as he sticks to his investment knitting. Volatility caused by money managers who speculate irrationally with huge sums will offer the true investor more chances to make intelligent investment moves. He can be hurt by such volatility only if he is forced, by either financial or psychological pressures, to sell at untoward times.

The average investor has an advantage if they can keep their head while everyone else is going crazy. They succeed by seizing on the opportunities created by others’ emotional mistakes.

However, it was Peter Lynch who summed up 1987 best. He cut a vacation short after losing one-third of the Magellan Fund in two days. He explained the why behind the crash this way:

So it was really a question of the market just kept going up and up and it just went to such an incredible high price by historic, price earnings multiple load, dividend yields, all the other statistics, but people forget that basically it was unchanged in 12 months. If you looked at September, 1986 to October ’87, the market was unchanged. It had a thousand point up and a thousand points down and they only remember the down. They thought, “Oh, my goodness, this is the crash. It’s all over. It’s going to go to 200 and I’m going to selling apples and pencils,” you know. But it wasn’t. It was a very unique phenomenon because companies were doing fine. Just, you know, you’d call up a company and say, “We can’t figure it out. We’re doin’ well. Our orders are good. Our balance sheet’s good.” “We just announced we’re gonna buy some of our stock. We can’t figure out why it’s going down so much.”

So from 1982 to 1986, the market rose roughly 117%. In 1987, the market spiked 44% from January to August. Then it slid…all the way back down. The 22% drop led to widespread pessimism throughout the market. The worry over further losses was high.

Yet, surprising everyone, the Dow ended 1987 with a 2% gain on the year! Bear markets normally decline over several months. The 1987 bear market consolidated months of decline into that single day.

The ’87 market went nowhere from start to finish. Yet, it went everywhere in between.

Source:
The October 1987 Market Break
Who’s to Blame When the Market Drops? Analysis Often Misses the Mark
The Great Crash: What Happened and What’s Next
1987 Berkshire Annual Letter
Peter Lynch: Betting on the Market – Frontline