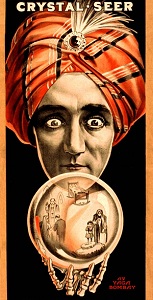 Every year market pundits and media set out to predict the future.  As you would expect (or maybe you wouldn’t?), their success rate falls short of a great batting average.  But despite all this, they come back each year to repeat the exercise.  Once again, we join the rank and file with some less outlandish market predictions for the year.

Hopefully, our success rate is slightly better than most.  If last year was any indication, it will be better than .500.

Before we get started, I’ll dispense with the legalize.  None of these predictions should be viewed as facts.  This exercise is for entertainment purposes only.  To be clear no math or statistical data analysis was used in any way.  In fact, no thought went into this whatsoever.  We wasted all our time coming up with solid ways to eliminate conscious thought in the predictive process:  rock paper scissors, counting out rhymes, darts and a magic eight ball were just a few.  In the end we flipped a coin.  And the results speak for themselves.

With that over with, let’s get onto the predictions!

Why the rocky first half?  The debt ceiling debacle part two is back.  The market will give a nice teaser of the S&P 500’s potential in January and early February.  Politics, as usual, will step on the brakes, erase all the gains for the year, as the debt ceiling debate gets nasty.  Expect it to be even worse than the 2011 event, causing a 15-20% decline in stock prices.  We’ll look back on it as a great buying opportunity.  So get your cash ready.

The lead industry in all this, energy (oil and natural gas) and housing.  Last years laggard, oil and natural gas companies are due for a good year.  Look for a resurgence in these stocks as U.S. production continues to ramp up with the economy.  I favor the oil service plays over the exploration companies.  Housing is a multi-year story as I stated last year.  It won’t be a blowout year like 2012, but it will outperform the S&P 500.

The chase for yield reaches a new high with small cap dividend funds popping up everywhere.

Not done with small caps yet, historically small caps outperform the market.  That hasn’t been the case the last few years.  Eventually we’re in for a small cap revival.  Expect a reemergence of small caps as investors take on more risk by years end.

HFT, high frequency trading concerns continue with algos gone wild and a string of small flash crashes in the market.  It causes a lot of discussion and media hype with absolutely no action taken.

Elsewhere in the ETF space.  Actively managed ETFs will be the new toys on the investment block.  Every fund company will want to have two or three.

The Fed finally shows signs of tightening as was laid out back in the December announcement.  We all know the cheap money wasn’t going to last forever.  The December announcement basically said, unchanged federal funds rate until 6.5% unemployment and/or no more than 2.5% long term inflation expectations.  It’s a toss-up which comes first.  I believe we’ll hit the inflation mark around late fall, early winter.  We’ll hit the unemployment mark in 2014.  This means an end to QE, finally.

I’m curious what real interest rates would be if the Fed weren’t forcing rates lower.  So is the bond market.  We’ll start to see signs of a bond market rebellion.  Though it’s short-lived as the Fed finally decides to tighten.

Bond funds will, again, be one of the worst performing assets.  Interest rates will be higher across the board – mortgages, treasuries, municipal, high yield, junk and most importantly savings accounts – will have higher rates by year-end.  Though, to be fair, will still be far less than acceptable.

The hyper inflation fears once again fall short of expectations.  Gold prices seem will be in a constant decline all year, ending down 17%.  It would be nice if this ended the constant gold trade discussions.

Europe, as a whole, has been a mess for several years.  Unfortunately, the good countries are being dragged down with the bad.  We finally see cracks in the Euro this year as countries start saying NO to helping their less responsible neighbors.  In return, we finally see one country fall from the Euro.  This has become another annual event that should be ended.

This year we’ll see the largest exodus of cable TV subscribers yet.  The cord cutting trend continues as it becomes easier to get access to programming through on demand and other video streaming services, while cable companies try to find new ways to overcharge subscribers.

One big acquisition – Netflix – a long rumored buyout candidate finally bites the bullet thanks to Microsoft.

Google already claims the mobile browser market.  This year they take control of the mobile advertising market.  Despite the heavy competition, companies haven’t been able to capitalize on it, yet.  Local search becomes the hot button.  The key will be where you search, not what you search.

Finally, Apple loses its standing as largest market cap company as the innovation and excitement wane.  All great things come to an end.

Be realistic when it comes to yearly predictions.  The best and brightest investment minds do this every year and fail miserably.  If their accuracy was a batting average, they’d never make it to the plate.  Yet, some still stroke their ego because they got one prediction right, while failing to mention the 19 that weren’t even close.