There are particular periods in the market where investing appears to be too easy. Things can get crazy when that belief spreads. 2021 was one of those years.

The danger of easy money is that investors become complacent. They become blind to the risks they take. They don’t realize that money made easily, can be just as easily lost.

Of course, anytime too many people believe returns are easy to come by, it’s a good time to return to the basics. Brushing up on sound investing principles, past cycles, and how similar periods ended is always a good idea when investors become risk-seeking en masse.

Warren Buffett once said, “People are habitually guided by the rear-view mirror and, for the most part, by the vistas immediately behind them.” He used it to explain why so many investors were hurt in past market bubbles.

Too often investors rely on recent experience to reinforce decisions. The error lies in setting expectations as if future conditions will exactly mirror the past. Except, markets don’t work that way. Change is constant. Looking backward ignores the craziness ahead.

The benefit of updating the different return quilts each year is seeing how often rearview mirror investing plays out. For instance, frequent double-dip predictions were made several years following the 2008 crash. Worries of a repeat recession, that would drag the market down with it, kept investors out of stocks. Of course, the predictions never came to pass and the U.S. market had one of its best runs ever. The S&P 500 earned a 16% annual return since 2009!

Now that 13 years have passed and the fear has subsided, investors are doing the opposite. They can’t get enough of the stock market. Investing in the rearview mirror would expect more of the same…if you overlook the fact that the conditions today are nothing like 2009.

Every market cycle produces behavioral extremes at the peak and trough that manifest in stock prices. This time is no different.

Investors are more comfortable owning stocks at the height of bull markets than at the depths of a bear. And they repeatedly suffer for it. Investors would be better off if they had a plan for the next bear market during the current bull.

If you haven’t done so already, now is a good time to think about risk management. And it starts with a simple question: Are you comfortable with the consequences if you’re wrong about your portfolio? If the answer is no, it’s time to make adjustments to fit your risk tolerance.

Because the idea that 16% annual returns will drag on for another decade seems silly (market indexes don’t outperform their averages indefinitely). Great runs like this don’t last forever. Be it in two months or two years, that plan will come in handy.

A note before getting to the 2021 numbers. The asset class, sector, international market, and emerging market return quilts, and the historical returns data are up-to-date. Hit the links for each one.

Below you’ll find four tables. The first is a quarterly breakdown of total returns for global stock markets. The next three are monthly breakdowns of developed markets, emerging markets, and U.S. sectors. A few broader lessons stand out:

And on the lighter side: 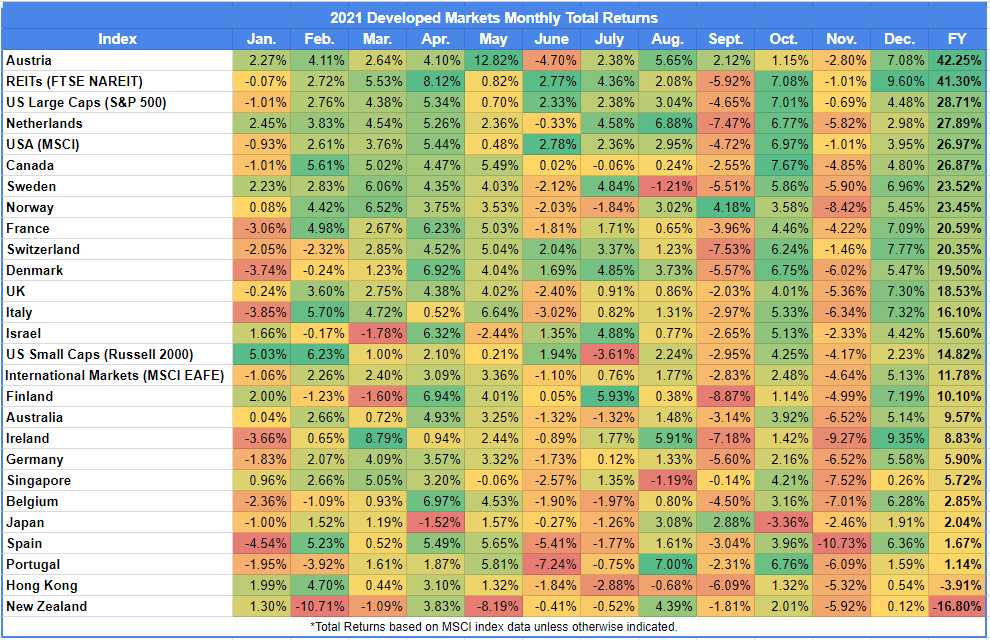 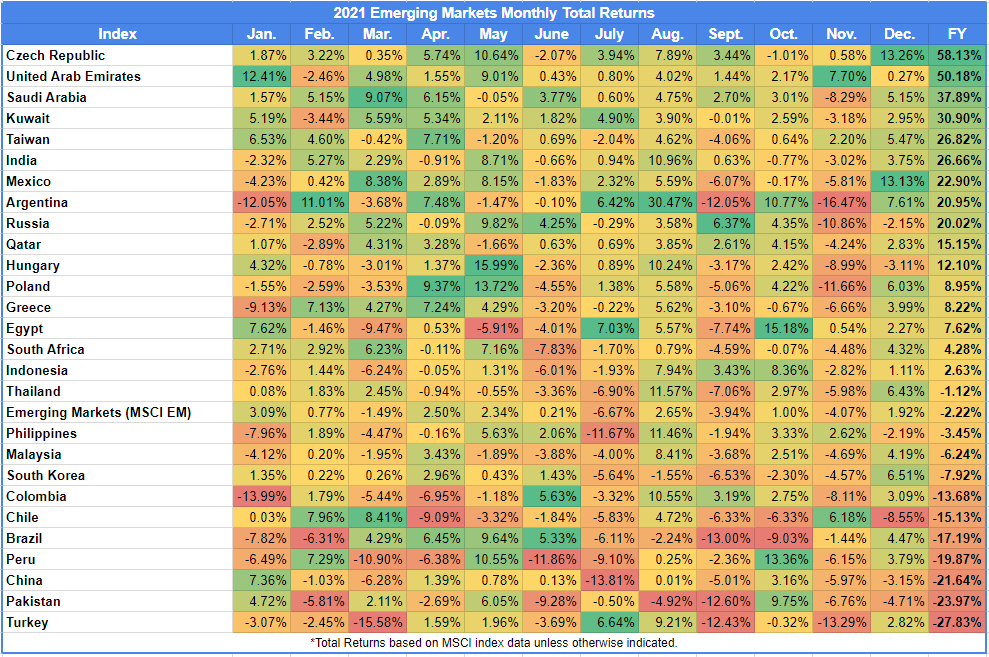