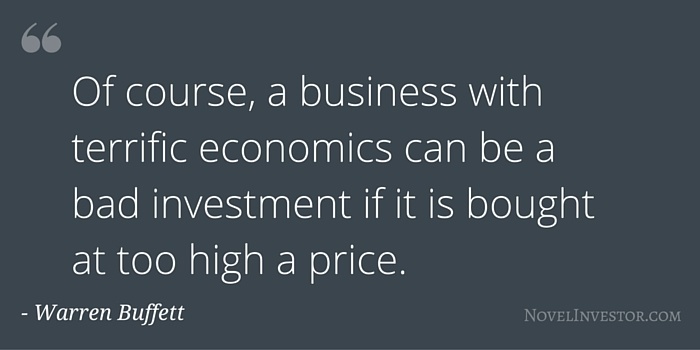 There’s always something to learn from Warren Buffett’s annual letters. He’s built a library of successes, failures, and accumulated knowledge from almost four decades of letters, which you can borrow from at any time. And, frankly, you can’t beat the price of free.

Typically, when I read the annual letters, I print it out, grab a pen or highlighter and dig in. Afterwards, I re-read all the areas I marked up and write out some notes. Five big takeaway’s from this year’s letter are highlighted below.

The Glass is Half-Full

Buffett’s unwavering optimism – with a side of realism – is the biggest lesson. He rightly points out how the U.S.’s ability to adapt to change has been its driving force despite there always being some shadow looming on the horizon.

It’s an election year, and candidates can’t stop speaking about our country’s problems (which, of course, only they can solve). As a result of this negative drumbeat, many Americans now believe that their children will not live as well as they themselves do.

This view is dead wrong: The babies being born in America today are the luckiest crop in history.

American GDP per capita is now about $56,000. As I mentioned last year that – in real terms – is a staggering six times the amount in 1930, the year I was born, a leap far beyond the wildest dreams of my parents or their contemporaries. U.S. citizens are not intrinsically more intelligent today, nor do they work harder than did Americans in 1930. Rather, they work far more efficiently and thereby produce far more. This all-powerful trend is certain to continue: America’s economic magic remains alive and well.

For 240 years it’s been a terrible mistake to bet against America, and now is no time to start. America’s golden goose of commerce and innovation will continue to lay more and larger eggs. America’s social security promises will be honored and perhaps made more generous. And, yes, America’s kids will live far better than their parents did.

Later, he explains how regular innovation and efficiency has gradually improved productivity and prosperity over time.

In 1900, America’s civilian work force numbered 28 million. Of these, 11 million, a staggering 40% of the total, worked in farming. The leading crop then, as now, was corn. About 90 million acres were devoted to its production and the yield per acre was 30 bushels, for a total output of 2.7 billion bushels annually.

Then came the tractor and one innovation after another that revolutionized such keys to farm productivity as planting, harvesting, irrigation, fertilization and seed quality. Today, we devote about 85 million acres to corn. Productivity, however, has improved yields to more than 150 bushels per acre, for an annual output of 13-14 billion bushels. Farmers have made similar gains with other products.

Increased yields, though, are only half the story: The huge increases in physical output have been accompanied by a dramatic reduction in the number of farm laborers (“human input”). Today about three million people work on farms, a tiny 2% of our 158-million-person work force. Thus, improved farming methods have allowed tens of millions of present-day workers to utilize their time and talents in other endeavors, a reallocation of human resources that enables Americans of today to enjoy huge quantities of non-farm goods and services they would otherwise lack.

It’s easy to look back over the 115-year span and realize how extraordinarily beneficial agricultural innovations have been – not just for farmers but, more broadly, for our entire society. We would not have anything close to the America we now know had we stifled those improvements in productivity. (It was fortunate that horses couldn’t vote.) On a day-to-day basis, however, talk of the “greater good” must have rung hollow to farm hands who lost their jobs to machines that performed routine tasks far more efficiently than humans ever could.

Yet, Buffett keeps it real. It’s the unlikely events – like climate change or nuclear war – that keep him up at night.

There is no way for American corporations or their investors to shed this risk. If an event occurs in the U.S. that leads to mass devastation, the value of all equity investments will almost certainly be decimated.

No one knows what “the day after” will look like. I think, however, that Einstein’s 1949 appraisal remains apt: “I know not with what weapons World War III will be fought, but World War IV will be fought with sticks and stones.”

Mistakes don’t get discussed enough around investing. Yet, Buffett annually points out his business imperfections. I’m fairly certain that humility helped him become one the best. This year, it only took him few paragraphs to say it, then repeat it later:

I’ve made some dumb purchases, and the amount I paid for the economic goodwill of those companies was later written off, a move that reduced Berkshire’s book value.

A few, however – these are serious mistakes I made in my job of capital allocation – have very poor returns. In most of these cases, I was wrong in my evaluation of the economic dynamics of the company or the industry in which it operates, and we are now paying the price for my misjudgments. At other times, I stumbled in evaluating either the fidelity or the ability of incumbent managers or ones I later appointed. I will commit more errors; you can count on that. If we luck out, they will occur at our smaller operations.

Throughout the letter, he covers the type of business he looks for:

To achieve our goals, however, we follow an approach emphasizing avoidance of bloat, buying businesses such as PCC that have long been run by cost-conscious and efficient managers.

These four investees possess excellent businesses and are run by managers who are both talented and shareholder-oriented. Their returns on tangible equity range from excellent to staggering. At Berkshire, we much prefer owning a non-controlling but substantial portion of a wonderful company to owning 100% of a so-so business. It’s better to have a partial interest in the Hope Diamond than to own all of a rhinestone.

Of course, a business with terrific economics can be a bad investment if it is bought at too high a price.

The Similarities of Insurance and Investing

Buffett spends a lot of time covering the insurance side of Berkshire’s business. He lays out the four disciplines to a sound operation, which runs parallel to the disciplines of investing:

At bottom, a sound insurance operation needs to adhere to four disciplines. It must (1) understand all exposures that might cause a policy to incur losses; (2) conservatively assess the likelihood of any exposure actually causing a loss and the probable cost if it does; (3) set a premium that, on average, will deliver a profit after both prospective loss costs and operating expenses are covered; and (4) be willing to walk away if the appropriate premium can’t be obtained.

Many insurers pass the first three tests and flunk the fourth. They simply can’t turn their back on business that is being eagerly written by their competitors. That old line, “The other guy is doing it, so we must as well,” spells trouble in any business, but in none more so than insurance.

Buffett and Munger have warned investors before to watch out for CEOs and others who try to dress up earnings with “adjusted” numbers or EBITDA.

In arriving at our earnings figure, we deduct all corporate overhead, interest, depreciation, amortization and minority interests. Income taxes, though, are not deducted. That is, the earnings are pre-tax.

Our definition of coverage is the ratio of earnings before interest and taxes to interest, not EBITDA/ interest, a commonly used measure we view as seriously flawed.

I suggest that you ignore a portion of GAAP amortization costs. But it is with some trepidation that I do that, knowing that it has become common for managers to tell their owners to ignore certain expense items that are all too real. “Stock-based compensation” is the most egregious example. The very name says it all: “compensation.” If compensation isn’t an expense, what is it? And, if real and recurring expenses don’t belong in the calculation of earnings, where in the world do they belong?

Depreciation charges are a more complicated subject but are almost always true costs…When CEOs or investment bankers tout pre-depreciation figures such as EBITDA as a valuation guide, watch their noses lengthen while they speak.