In most years, the market sits in the gray area between the two extremes of the cycle. 2020 was not one of those years. It was unique. It went from fear to greed within a matter of months.

One of the fastest crashes in market history.

The chart is the S&P 500, Russell 2000, and the Nasdaq crash in March. Everything fell. All three indexes peaked around February 19th. By March 23rd they each hit bottom.

The Nasdaq fell the least and the Russell 2000 fell the most. It was one of the swiftest crashes in market history.

Here’s what the S&P 500 looked like on a daily basis from the February peak. 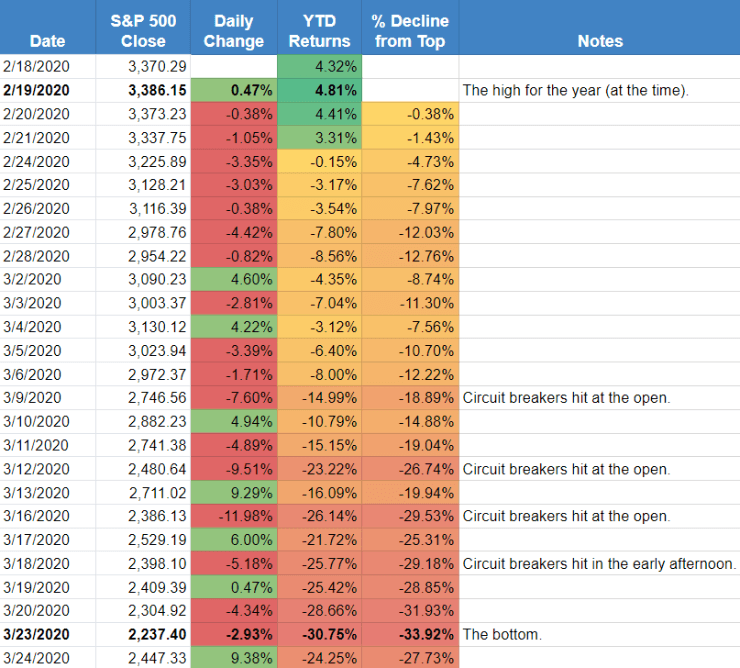 The advantage of hindsight makes the chart easier to stomach. It’s important to remember that at that moment nothing was certain. Nobody was pounding the table about an imminent recovery.

The first big lesson of 2020 is that unexpected things happen. It’s hard to prepare for something you don’t know is coming, but a portfolio without a plan is helpless in these situations. As investors, we build our portfolio to handle as many knowns and unknowns as possible without sacrificing much on returns.

The second big lesson of 2020 of this. How we react to crashes and recoveries has an immense impact on our investing fate.

You can try to time the crash. You can sell in the hopes of buying back near the bottom. Maybe you get lucky. But the reality is most investors fail. They sell at a loss and wait and wait for the perfect opportunity that already passes them by. It’s a matter of comfort. Most investors aren’t comfortable buying stocks until prices are rising again. They miss most of the recovery in the process, then try to make up for it by taking undue risks.

To make real money from a crash requires buying when everyone is rushing to sell. Anyone who says that’s easy in the face of a 30% drop is lying. But difficult things lead to the biggest payoffs.

Of course, the alternative is to do nothing. The investors who did nothing, who sat on their hands, and kept their eyes on the long run are better off today because they did exactly what they set out to do. That’s investing in a nutshell. Have a good plan, follow through with it year after year, and who cares what anybody else thinks.

The third and final lesson of 2020 is about cash. The March crash was a race for liquidity. Everyone scrabbled to get as much cash as possible, creating a lightning sale on stocks.

The recovery was unexpectedly fast too.

Had you been told on March 23rd that the stock market would be at all-time highs by year’s end, would you believe it? Me neither.

The chart shows how the recovery played out for the Nasdaq (the light blue at the top), the S&P 500 (the darker blue line in the middle), and the Russell 2000 (the purple line at the bottom). It’s tech, large caps, and small caps respectively. All-time highs for all three, with the small caps edging out large-caps so far.

It also summarizes the winners and losers of the pandemic. The biggest companies benefited most early on and tech benefitted most among them.

Lastly, to reiterate the point, the quick recovery in large caps made it doubly hard for anyone trying to time the bottom. The opportunity was gone before anyone knew it. With that said, the “cheap” opportunities in small caps lingered for several months. 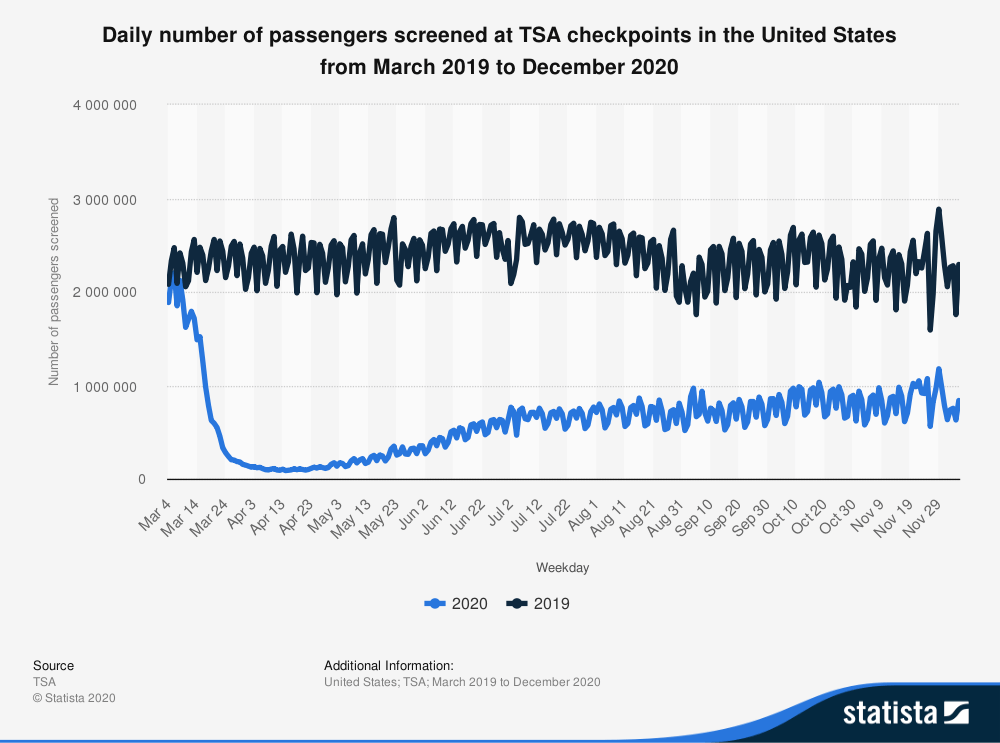 Literally, everything stopped in March. The TSA checkpoint numbers are a perfect example of this. Understandably, the number of U.S. travelers today are less than half what they were in 2019.

Here’s what airline stocks looked like this year. It’s a fairly similar path.

Record unemployment in a matter of days.

The unemployment rate is staggering on its own, but compared to 2008, it’s shocking.

To offer a little context, initial unemployment claims for the week ending March 21st were 3,283,000! That’s 3,001,000 more than the prior week! It’s more than the entire month of February. The following week’s numbers were worse because most stay-at-home orders rolled out the week after March 21st.

Then things got weird.

Okay, it was negative oil futures. It was a first. How many people thought it was ever possible? None. It’s another example that surprises happen all the time and not every outcome is represented in history. “Never say never” is a good motto for markets.

Of all the possible outcomes from the March crash, 2020 brought a rise in speculation. It was initially a surprise.

But if you stop to think about it… People are stuck at home with no boss looking over their shoulder, brokerages apps on their phone, checks from the government to do whatever they want with, non-existent sports, so non-existent gambling, and the stock market is open five days a week. The “buy the dip” chants over the last decade morphed into “stocks only go up.”

There are too many examples of speculation gone wild, so I picked a few favorites. Who remembers Zoom?

The rise of virtual meetings over Zoom drove speculators to bid up the wrong Zoom. The penny stock Zoom Technologies (ZTNO) jumped from literal pennies to over $20/share in March. The efficiency of it.

That’s the real Zoom. It’s a $115 billion video conferencing company with a P/E of 281. I’ll let you guess when the speculation began. Having been in several Zoom meetings this year, there’s nothing special about it that can’t be replicated by another tech company. But maybe I’m missing something.

Who remembers Kodak’s moment in the spotlight?

The barely alive Eastman Kodak Company announced it would pivot into drug manufacturing. The U.S. government gave it a loan to do just that. Seriously!

That spike you see is its share price soaring from around $2 to $33. Then it came back to reality. Somehow the loan was frozen after allegations of stupidity, among other things, emerged.

Can you guess the biggest car company in the world?

When I see a chart like, my first instinct is to avoid it at all costs. But this one, I honestly don’t understand it.

Here are a few facts. Tesla became the biggest car company in the world this year. It will officially be added to the S&P 500 on December 21st as the 6th biggest publicly traded company in the U.S. at $605 billion. That’s 12 times bigger than the average car company. Yet, it’s outside the top 100 companies based on total revenue. That revenue is about 64% less than the average car company. It also makes significantly fewer cars than — just pick one — any other major car company.

How much of the company’s future growth is already priced in? What type of returns do shareholders expect at its current share price? Are those returns reasonable?

About the only intelligent thing about Tesla is the new share issuance at its ridiculously high stock price. Raising capital is great for the company because it needs it for all that expected growth to be realized. But it also dilutes shareholders. At this point, why not just buy out another car company too?

I’m guessing this is what priced for perfection looks like. Maybe it’s priced beyond perfection. Guess we’ll find out.

That’s a chart of an IPO ETF. It’s seen a bit of demand lately (nevermind that it doesn’t even hold the most recent IPOs).

The first-day jump in the stock price of the latest IPOs has brought out comparisons to the Dotcom bubble. So let’s compare.

To summarize, the speculative pool of the market is always a tempting place to swim. The prospect of getting rich quickly is hard to ignore. The stocks have great stories explaining why prices will keep rising. The risk is believing that’s the only direction stocks go. Because often the story is just a story. A tall tale. Then investors realize these stories leave out the possibility of getting poor quickly too. 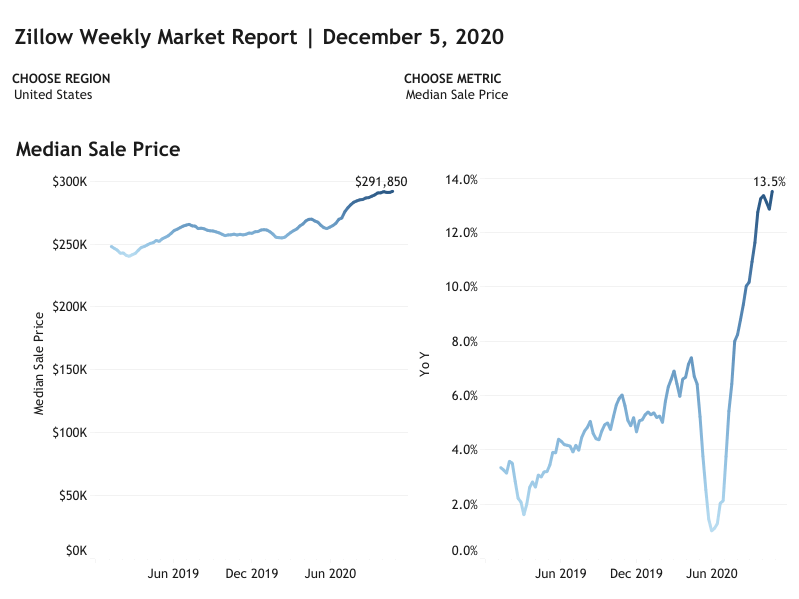 Who expected a surge in home sales and prices in the midst of a pandemic? Not I.

A number of reasons have been cited to explain this phenomenon. I’d be curious to know what percentage of homebuyers are new homebuyers versus people moving out of big cities due to remote work versus people who were stuck at home for months and realized they don’t like their home.

In any case, at least homebuyers took advantage of record-low mortgage rates.

Value died again this year. Depending on how one defines value, it might have magically resurrected itself in the back half of the year. Or it was never dead to begin with.

Seriously though, the “death of value” has been a recurring theme for a few decades. The message perpetuated by the media that equates value investing with reweighting a broad index by a valuation metric like lowest Price/Book rather than buying things for less than they’re worth is amusing at times.

As someone with a value portfolio that has performed more than adequately over the years, I can only hope more people believe this recurring theme. Better returns await those who know better.

Finally, the unanswered question. Which of the major changes over the last ten months are here to stay and which are not?

There’s been some major upheaval with virtual meetings, remote work, moving away from big cities, and less business travel. There have been rumors of the end of movie theaters, cruise lines, and more. Of the things that define today’s normal, which will play a bigger part of tomorrow’s normal?

Obviously, it’s a matter of degree. Some things will stay the same. Some will revert. The market is already placing its bets. My only prediction is that most people like convenience and they like to be around other people. So the changes, or lack thereof, will revolve around that. It’ll be fun to see how it plays out.

Here’s another question. What are investors to do with record-high stock prices and record low-interest rates? It’s a question that’s been asked for several years now. The best answer is still to lower your expectations for returns. It’s best to be conservative. Besides, low expectations that surprise on the upside are far more enjoyable than the opposite.

2020 was also a crazy one for the blog too. The goal was to double down on everything I started last year.

Besides the 90 odd blog posts on the year. I added 200 quotes to the quote collection, surpassing 700 total. 13 new book notes were added as well, which is less than I had hoped (the backlog of books is growing). And the Library collection is up to over 500 pieces.  Overall, the site saw an unexpected 80% increase in traffic and similar numbers for subscribers year over year.

The biggest project was trying to do all that while also completing as much of the CFP education requirements as possible. The only good thing about the lockdowns was being able to quickly work through them with little interruption. I’m down to two courses and the exam to finish in 2021. A job hunt will begin soon too (if you know anyone hiring, let me know).

Have a safe and Happy Holidays and a prosperous New Year!