As 2021 comes to an end it’s time for some highlights on the year. 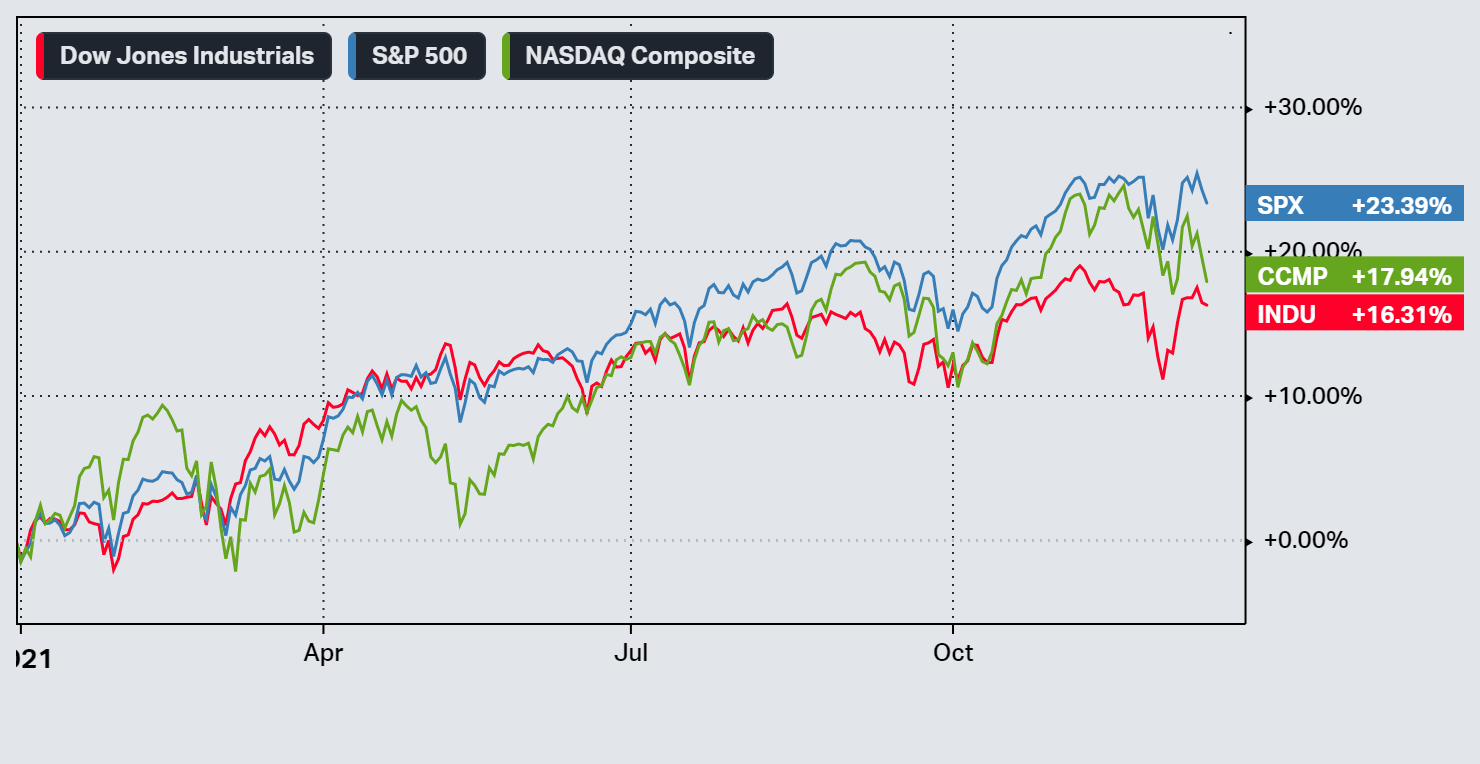 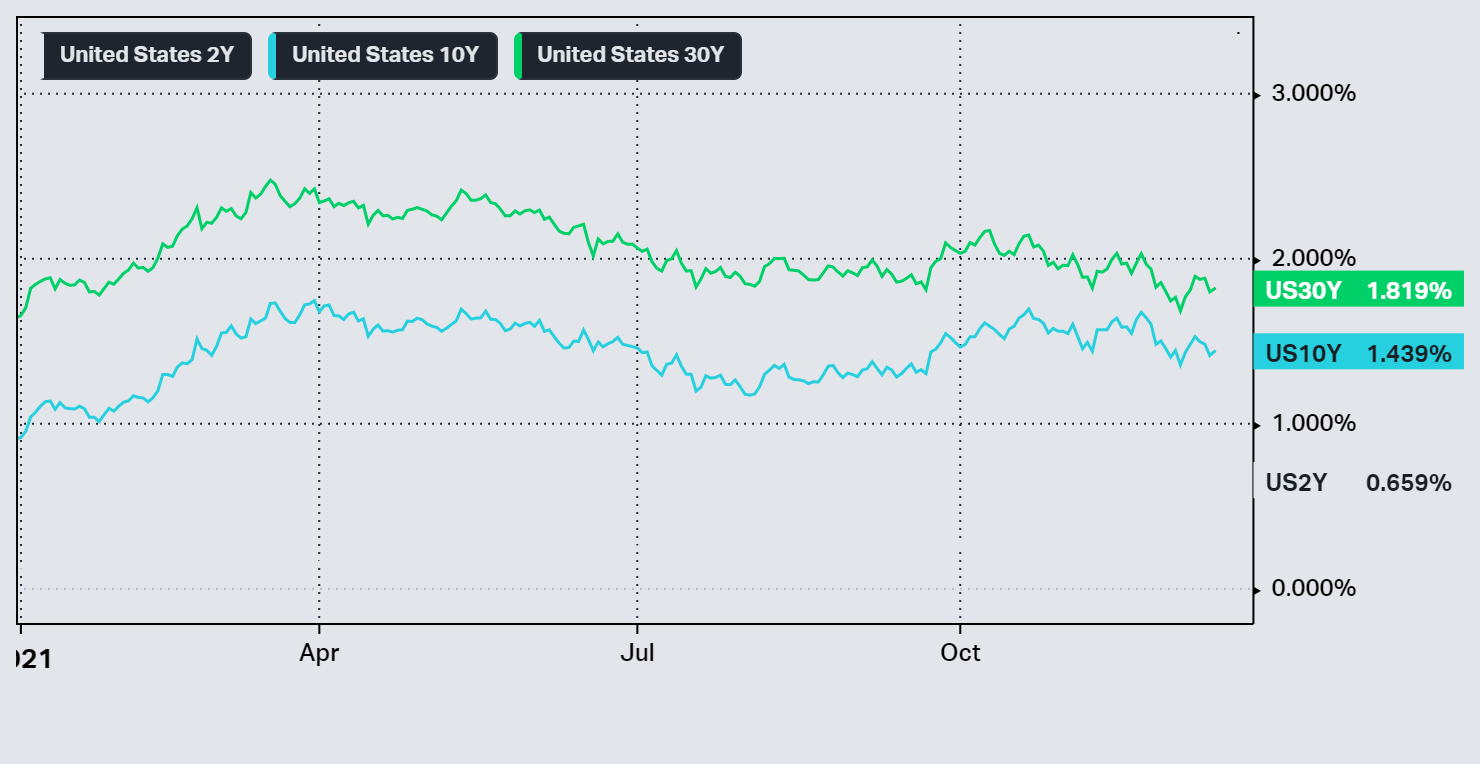 10-yr Treasury yields are back above 1% but both the 10 and 30-year treasuries have fallen despite a rise in inflation in recent months. The initial view on higher inflation was that it was temporary, due to supply issues. That view has since moved to a belief that it’s more permanent. My guess is that it falls somewhere in between.

What should investors do about it? Probably nothing. Long-term investors shouldn’t be making drastic portfolio changes based on month-to-month shifts in inflation. Stocks are a good inflation hedge in the long run and if people truly are worried about higher inflation, then it’s already priced in. By the way, the bond market doesn’t seem too worried about it.

Broadly, the charts look uneventful. Which couldn’t be further from the truth. Every year brings surprises. This year, those surprises came early.

Out of nowhere, Gamestop ballooned to a high of $483 on January 28. 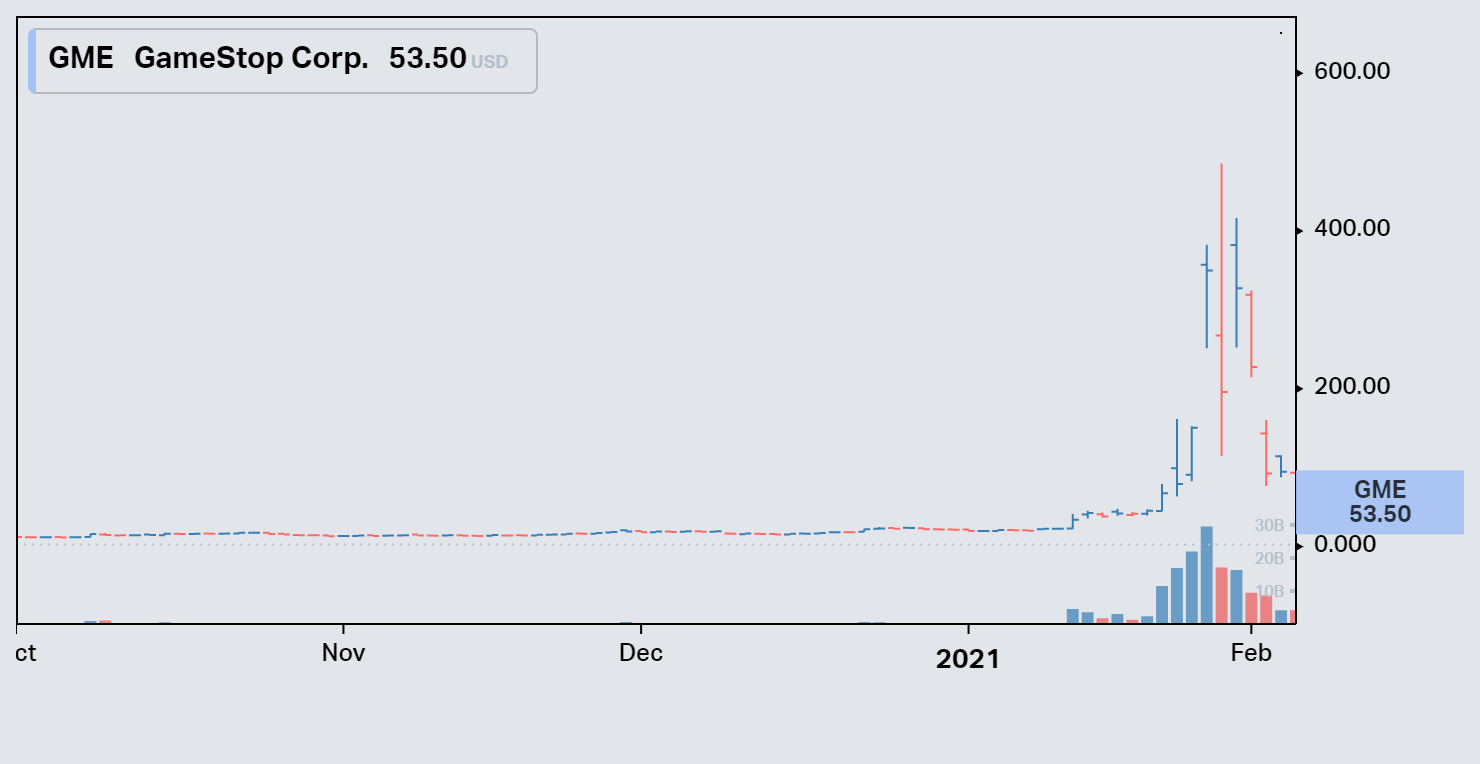 A similar thing happened to AMC. Though AMC followed it up with an encore around mid-year. 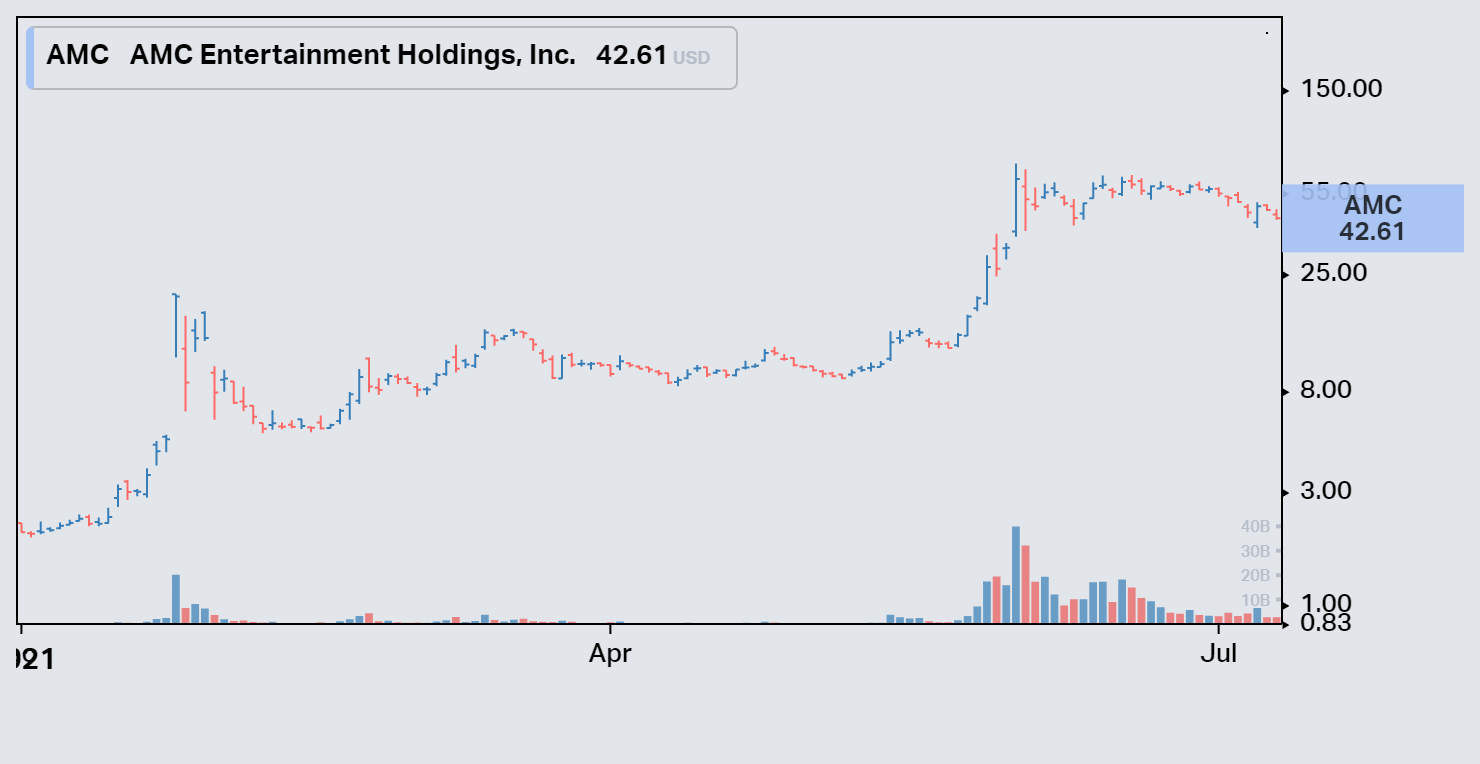 Tootsie Roll even got in on the action. 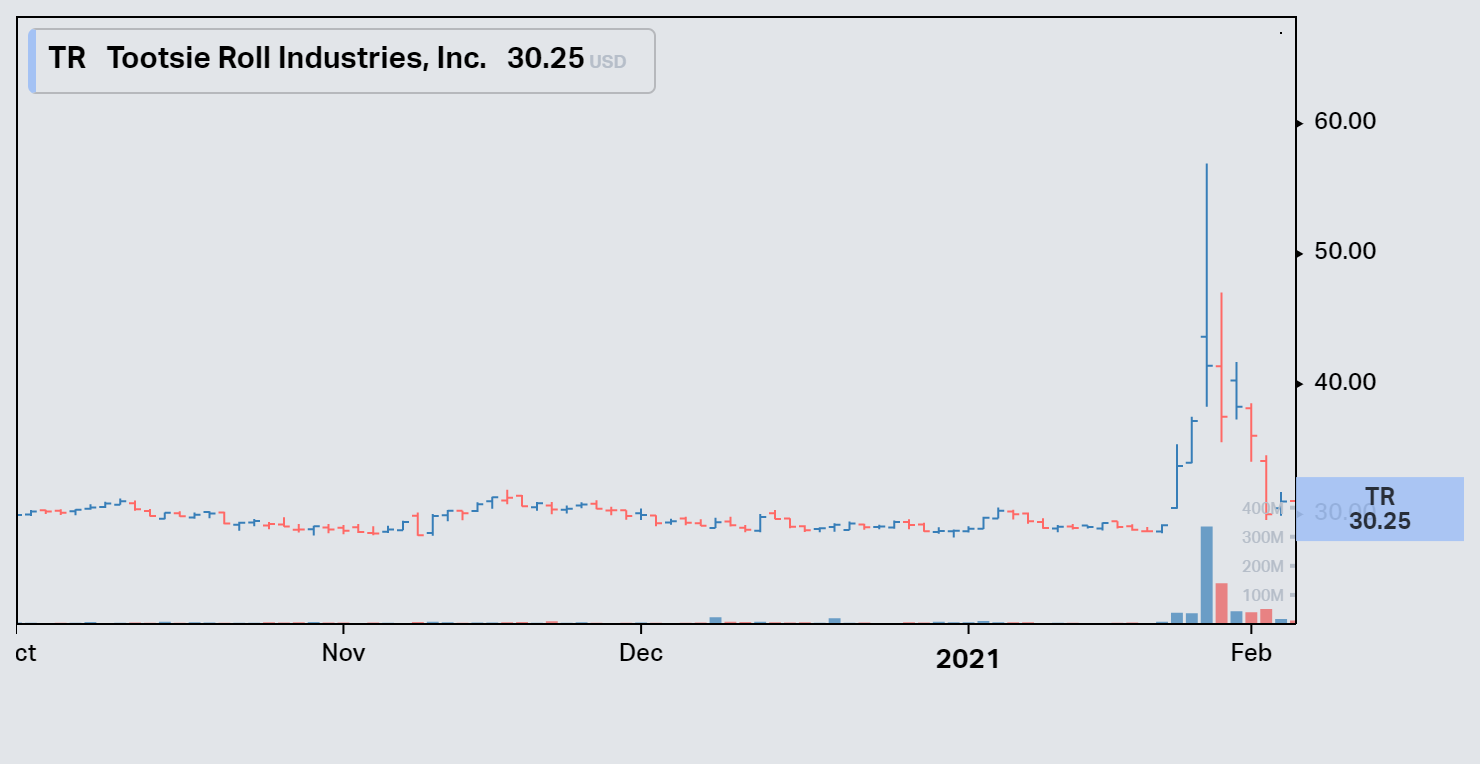 For the record, all three examples are currently priced well below their 2021 highs.

There were others too. The returns on the most shorted small-cap stocks were tremendous.

The 10% most shorted small caps outperformed the equal-weighted Russell 2000 over a 3 month period. While the 5% least shorted underperformed. (My anecdotal experience, in two cases: the one-day price spikes happened on exceptionally high volume and no news at all. It would not surprise me if there was underlying manipulation targeted at heavily shorted, low float, and/or low-volume stocks.)

To top it off, speculation in penny stocks hit ridiculous heights in February.

To sum it up, speculation was rampant. The stocks of lower-quality and unprofitable companies were getting much of the attention.

In fact, the number of stocks trading at over 15x sales hit a high in the first half of 2021, something not seen since 2000. 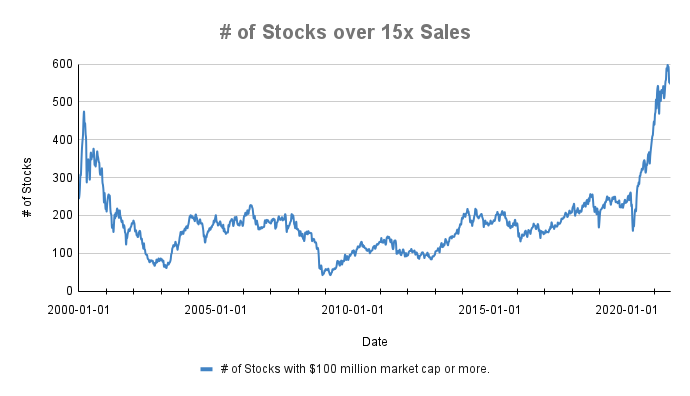 As I wrote at the time:

Over half of the 600 stocks trade at over a $1 billion market cap, roughly 20% are over $10 billion, and a handful exceeds $100 billion (3 are over half a trillion). Yet, 80% of these companies have no earnings, 64% are projected to have no earnings over the next 12 months, and the group carries a median Price/Sales multiple of 36. The companies that do have earnings carry a median P/E of 83.

Rarely does this level of speculation pay off. Chasing fast returns inevitably leads to pain later on. That pain came sooner than expected for some.

Something changed around late February. The high-flying stocks, the SPAC fad, the unprofitable tech companies, and IPOs that largely drove the market at the end of 2020 and early this year, began to sell off. While the S&P 500 and other indexes kept churning higher.

Honestly, the declines in the speculative niches of the market are a good sign. Since then, it’s largely been a tale of two markets.

Sidenote: the chart makes a good argument for the benefits of a diversified index fund.

The DotCom bubble was referenced a lot this year. Anyone who experienced that speculative period can see similarities to the craziness today.

Only, this time the similarities are on full display thanks to social media. A fanatical view towards certain investments is alive and unwell. We’re currently at the point in the cycle where investors feel slighted by a stranger’s opinion about an investment they own, rally their tribe, and verbally defend that position to the death. If only their portfolio knew they cared. It’s insane but here we are.

Of course, the similarities between any speculative era are tied to human nature. However, it doesn’t mean this time will play out exactly as it did back then. History always keeps us guessing.

So you have to be ready for an assortment of outcomes whether they happen or not. It’s not enough to assume that a market crash is bound to happen. You also have to be prepared in case it doesn’t. Investing is difficult because what seems obvious doesn’t always play out.

This is the last post for 2021. Juggling the blog with studying for the CFP® exam (I passed), while trying to follow everything going on in the markets the last few months left me drained. I can use a much-needed break.

Things will start up again in January. I’ll have 2021’s global returns published the first week of the year. The asset class quilts will also be updated that week.

Have a Happy Holidays and a prosperous New Year!