A. Newton Plummer was a corporate publicist. He was also a stock promoter. He helped pool operators manufacture huge profits during the 1920s bull market.

A pool was a group of people that pooled their money to buy a stock, manipulate the price higher, and then sell it to the unsuspecting public at a huge profit. At the same time, PR was used to draw up publicity around the stock. That’s where Plummer came in.

Plummer wrote press releases filled with good news about the stock. He sent them to newspapers around the country in the hopes of being published. To guarantee it, of course, he bribed the reporters.

One example of this was the Armour & Co. operation run by Plummer:

The Armour & Co. publicity stunt demonstrates how far reaching this propaganda is as the news stories which my clipping bureau obtained numbered 736 from 170 papers with 17,656,218 circulation in 98 cities with population of 30,863,816.

This campaign was conducted for Blair & Co. and Chase Securities Corp. and cost $5,000 divided among the newspaper reporters.

How blindly the reporters used the “news release” sent to them is herewith shown.

New York, Mar. — The consolidation of Armour & Company and Morris & Company has resulted in a saving of approximately $10,000,000 a year, according to F. Edson White, president of the company. Industrial engineers estimated that this would be saved annually at the time of the acquisition of Morris & Co.’s properties and business by Armour & Co. and in only two years these estimates have been more than justified, for it is now apparent that this estimate will be exceeded. The merger has measurably increased the volume of business and has enabled the adoption of great economies in the cost of operation and distribution.

Within a few days, a couple of dozen news stories would appear relating to the information above. It would be repeated if needed until the pool had sold all its shares for a hefty profit. 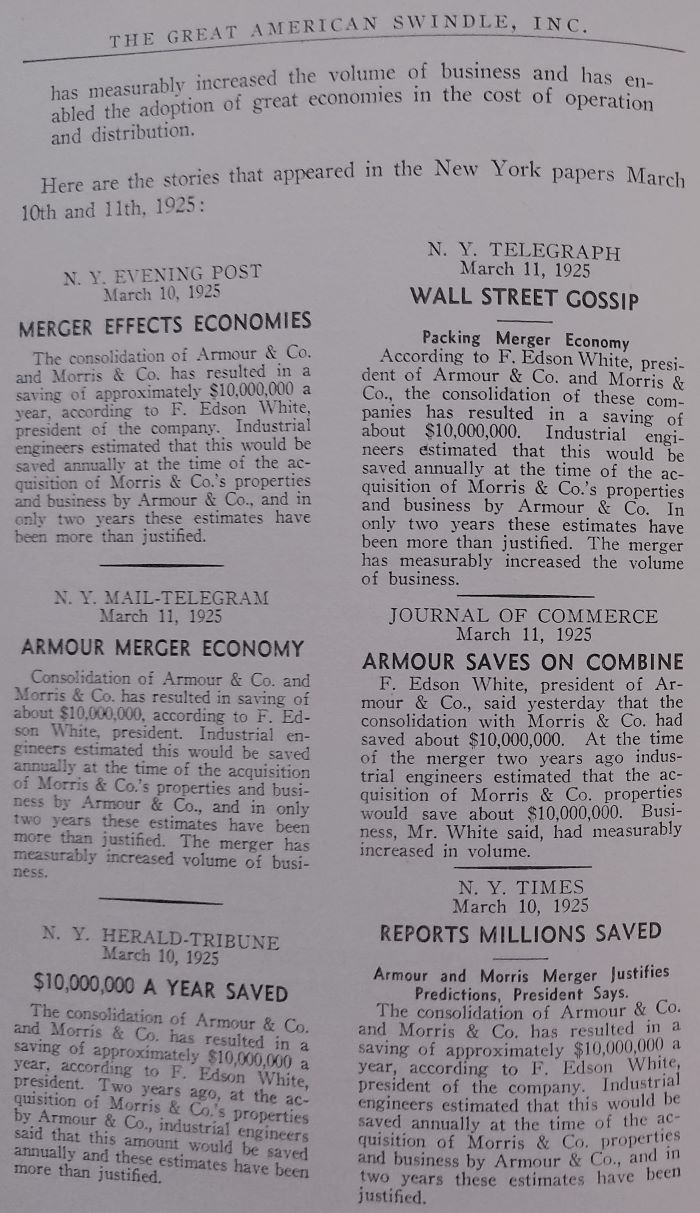 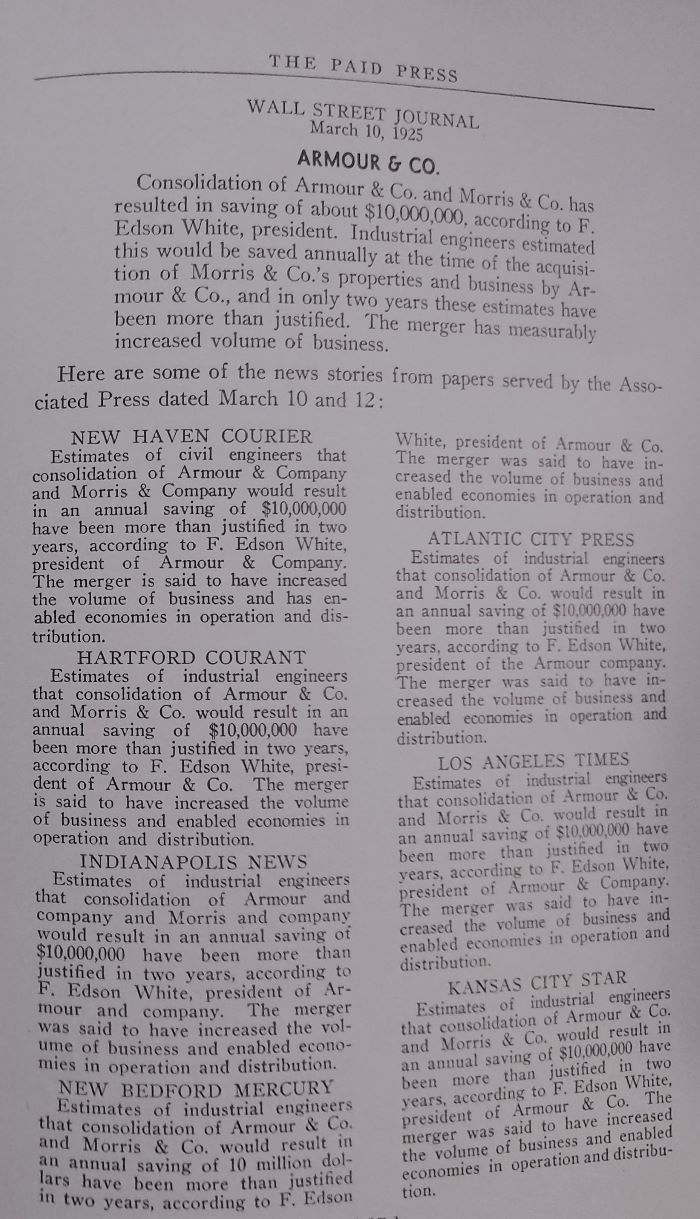 To say Plummer made a nice business of this would be an understatement. Over eleven years, from 1919 to 1931, he paid reporters $295,015 for publicity. The pool operations made considerably more.

The fact that editors and owners of newspapers were unaware of this vicious system does not alter the fact that it was bought and paid for in good American dollars.

To ascertain what papers to published news that was bought consult Ayres Newspaper directory. The 61 scrap books I have show almost every paper in the country printed these paid stories. In these scrap books are 21,885 separate stories from 705 newspapers in 412 cities of this country and Canada. Eliminating duplications, the total daily circulation of these papers is 31,564,760 with population of 48,022,492 in the cities where the papers are published. Without attempting to pad the story, clipping bureaus usually obtain about 30 percent of the stories printed so readers can appreciate the extent of this nationwide propaganda. The papers were which published these articles (of which I have proof) include the 58 states, District of Columbia and seven Canadian provinces.

Plummer’s 61 scrapbooks were each tied to an individual stock. That’s 61 pool operations pumping the price of 61 different stocks. All tied to one man.

The extent of his operation came with an added perk. In time, the reporters not only relied on him for the pay but as a trusted insider for other news stories and stock tips on companies. Of course, Plummer took full advantage of it.

How many other pool operations were doing something similar during that time? Quite a few. It was entirely legal at the time and it worked…maybe too well.

It’s not hard to imagine how a decade of “good news” stories and rising stock prices might contribute to the buying frenzy that blew the biggest market bubble in U.S. history.

In the end, Plummer’s scrapbooks came in handy. Congressman Fiorello La Guardia used them, along with a pile of canceled checks, as evidence during the Senate Banking and Currency Committee hearings in 1932.