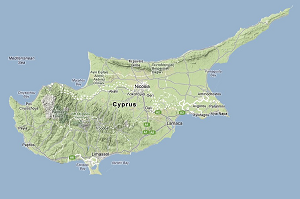 Once again, Europe has taken the center stage in the global economy. This has become an annual rite of passage.

Europe has taken upon itself to slowdown the market’s great start with another debt crisis. In other words, Europe has taken their ball and gone home. Again. For the fourth time. Such a tease. And we keep falling for it.

This year’s debt crisis is brought to you by Cyprus. Did you know Cyprus was in the European Union? Me neither. And it’s the geography lesson of the day (check the map). Who knew a country one million strong with an economy weighing in at 0.2% of the EU could put the brakes on a fantastic first quarter run.

Little Tax Haven That Could

The tax haven of the Mediterranean. Cyprus carved out a niche promising low corporate tax rates and little regulations. Making it prime real estate for money laundering and other nefarious activities. Which is the big political concern. But I digress. This tax haven was so popular that the banking system grew to eight times the country’s GDP. And there lies the problem. Albeit, a known one since at least last July.

The current bail out deal has changed almost a dozen times since Monday and it hasn’t even been voted on yet. As it stands now, any deposits over 20,000 Euros will be hit with a 6.75% levy and anything over 100,000 Euros will see a 9.9% levy.

By the way, if you’ve ever had to launder money, a 10% levy is a great deal. Unless you’re money doesn’t need cleaning.

Feel free to call it a tax or a raid or whatever. But depositor’s will eventually be compensated.

First, with bank stock. Yes, the same bank stock of the practically bankrupt bank in which their deposits sit.  If they are brave enough to keep those accounts open for two years, they can expect further compensation in government bonds. The same Cyprus government that can’t seem to pay its current debt. (Both will most likely be available on the cheap should the deal go through. If it worked with Greek bonds…)

And it’s the stupidest idea yet. The way I understand it, the theory behind deposit insurance is the perceived notion that you can’t lose money. The fact it’s being put to a most probable failed vote sets a bad precedent. Why would anyone keep their money in a European bank after this. Or trust any European politician claiming their deposits are safe.

For now, Cyprus enforced a bank holiday until Thursday to prevent a bank run and global markets are in limbo while we watch the political wrangling.

So, is this important? As things now stand, No. This is one of those “what if” moments that can easily be blown out of proportion. Until we know all the facts, we’re stuck with the doomsayers and their worst case scenarios. For now, it’s all just hot air.

It comes down to perception and possibility. If folks in other EU countries believe their money is better off buried in their backyard, it could cause a run on the banks. The alternative is leaders in other EU countries thinking this is a viable option for their banks. Either could cause a domino effect. Yet the reality is, a deal like this would never work in bigger EU countries. And I can’t predict fear and irrationality anymore than you can. But that doesn’t make it more likely to happen.

With the doom and gloom out of the way, Cyprus is just a catalyst. That event the markets needed to pause and take a break.

The past three years we’ve seen great first quarter runs fizzle out around April. Again this year, the S&P 500 is up about 9% rolling into April.

Current stock prices need a show of support. First quarter earnings season is right around the corner. With it we need to see progress. That means earnings above expectations, dividend raises, and higher projected growth through year-end. That’s a lot to ask for out of first quarter results.

If it’s anything like the past three years, we’ve consistently seen slowing first half of the year growth with the second half picking up steam. The market has been late to recognize both. So I don’t see the April trend breaking this year.

In the end, it will always come down to fundamentals. The timing of this Cyprus story might just offer a buying opportunity. If we’re lucky, we’ll get an overreaction and the needle will tip toward worse case before the ECB shores up the problem.

And don’t forget the Fed meeting this week with interest rates, QE, and its economic forecast going forward.