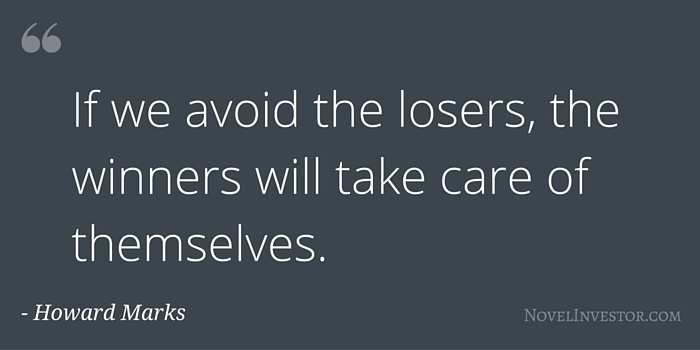 Any chump can bet all their money on a single stock and get wiped out. But it takes a special kind of genius to invest and consistently lose money in the market. They follow one mistake with another, compounding their losses with opportunity cost.

To avoid the same fate, we can steal a few lessons in how to lose money from the great investors who came before us.

Easy enough. I use the same rules in Vegas and I swear it never fails.

But you know better. Right?

Never losing is impossible. Anyone who tells you different is lying. The great investors know losing is part of investing. They lose money better than anyone.

The great investors weren’t great from the start. They built up knowledge while getting knocked down. They learned from their losses. They built a callused investment process that stops them from investing in things they don’t understand, from taking on risks they can’t comprehend, and from feeling the pain of temporary volatility. And, just in case, they add a margin of safety. Finally, and most important, they invest simply.

From the outside looking in, it’s easy to think investing is hard and because it is hard, it needs to be complex. So rather than taking something simple that works, let’s add more steps to the process. Do you think Buffett sits around trying to make his strategy more complicated?

He spends most of his days simplifying his process. At this stage of his life, I doubt it’s ever been simpler. Part of that process is understanding all the risks of an investment before he buys in. Complicated and complex adds more risks to consider, especially unknown risks.

By keeping things simple, you get an idea of the potential outcomes. From there, you decide – is the risk low enough, and are you comfortable enough with it, to warrant an investment or is there so much uncertainty it’s not worth it? The great ones don’t want to miss anything that might cause a bigger than expected loss. Simply, they don’t take excessive and unnecessary risks.

Still, even the great ones make mistakes. When one investment goes bad, they don’t want it to blow up their portfolio, so they diversify. Diversification is the simple idea of spreading out your risk.

How much is enough? Buffett, Munger, Greenblatt, and others think a concentrated portfolio of 5 to 10 stocks is diverse enough. There’s only so many good investments available. Why dilute your portfolio with anything sub-par?

But what about those of us without the time, the inclination, or the want to pick stocks?

Funds are your best choice. Owning more stocks lets you take a big loss without losing much. The same concept works across asset classes too, but with two caveats – low costs matter and less active is better.

Have a Long Runway

Despite the media’s insistence, the markets don’t move at a rapid pace. To make up for it, the media adds a sense of urgency akin to a late night infomercial. “Act now” is the message. Don’t listen to it.

A long-term view is the best resort. The great investors know they can’t predict what happens in the next few months, but given a long enough runway, their process wins out in the end.

You don’t need to hover over your portfolio like a helicopter mom. Checking in a few times per year is more than enough. This helps you avoid the damaging self-induced short-term losses.

Losing money is rough. The great ones seem to brush it off. Really, they adapt to it. They learn from it and adopt the lessons into their strategy. Each lesson acts as a built-in safety measure, another notch on their checklist, to avoid the mistakes of the past and prevent big losses later on. Without it, they would repeat the same mistakes, more often, like the rest of us.

And you don’t need some complex or complicated strategy. A simple rules based strategy is enough.

Here’s the real secret to their success – 90% of investing involves managing yourself not your money. What matters, and what will always matter, is having an investment strategy you can stick with. A simple rules based process will manage that 90% so the other 10% can be left alone to manage your money.