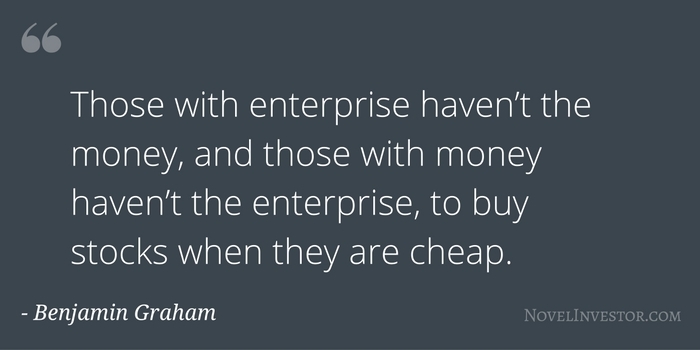 Ben Graham wrote a series of articles for Forbes in the summer of 1932. The basis for the articles was to get some relief to existing shareholders during the worst of the Great Depression. He had this wild idea that management should put shareholders first. And in turn, it offers a perspective of market history you won’t find in a chart.

The spectacle of a large and old established company selling in the market for such a small fraction of its quick assets is undoubtedly a startling one. But the picture becomes more impressive when we observe that there are literally dozens of other companies which also have quoted value less than their cash in bank. And more significantly still is the fact that an amazingly large percentage of all industrial companies are selling for less than their quick assets alone – leaving out their plant and other fixed assets entirely.

This means that a great number of American businesses are quoted in liquidating value; that in the best recent judgement of Wall Street, these businesses are worth more dead than alive.

Graham mentions a study of 600 companies on the NYSE. Of the 600 companies, 33% sold below their asset value, and over 50 sold below its cash equivalents. Investors could buy the assets of a company for less than they were worth (in some cases less than cash alone) and get the business and any future earnings for free. Put another way, they could buy dollar bills for 50 cents.

If gold dollars without any strings attached could actually be purchased for 50 cents, plenty of publicity and plenty of buying power would quickly be marshaled to take advantage of the bargain. Corporate gold dollars are now available in quantity at 50 cents and less – but they do have strings attached. Although they belong to the stockholder, he doesn’t control them. He may have to sit back and watch them dwindle and disappear as operating losses take their toll. For that reason the public refuses to accept even the cash holdings of corporations at their face value.

The experienced financier is likely to answer that stocks always sell at unduly low prices after a boom collapses. As the president of the New York Stock Exchange testified, “in times like these frightened people give the United States of ours away.” Or stated differently, it happens because those with enterprise haven’t the money, and those with money haven’t the enterprise, to buy stocks when they are cheap.

Graham goes on to explain what led to the ’29 Crash.

We must recognize, therefore, that the situation existing today is not typical of all bear markets. Broadly speaking, it is new and unprecedented. It is a strange, ironical aftermath of the “new era” madness of 1928-1929. It reflects the extraordinary results of profound but little understood changes in the financial attitude of the people, and the financial fabric of the country.

Two plausible and seemingly innocent ideas, the first that good stocks are good investments; the second, that values depend on earning power – were distorted and exploited into a frenzied financial gospel which ended by converting all our investors into speculators, by making our corporations rich and their stockholders poor, by reversing the relative importance of commercial loans and Wall Street loans, by producing topsy-turvy accounting policies and wholly irrational standards of value – and in no small measure was responsible for the paradoxical depression in which we find ourselves submerged.

First, a sound investment idea became distorted by speculation and greed. A higher emphasis on earning power turned into a willingness to pay an increasingly higher multiple at any sign of rising earnings. A few companies recognized this willingness and adjusted their accounting accordingly.

In recent years financial writers have been unanimous in pointing out how unimportant are asset values as compared to earning power; but no one seems to have realized that both the ignoring of assets and the emphasis on earnings can be – and have been – carried too far, with results of the most disastrous kind.

The whole “new-era” and “blue chip” madness derived from this exclusive preoccupation with the earnings trend. A mere $1 increase in profits, from $4 to $5 per share, raised the value of a stock from 40 to 75, on the joyous assumption that an upward trend had been established which justified a multiple of 15 instead of 10. The basis of calculating values thus became arbitrary and mainly psychological, with the result that everyone felt free to gamble unrestrainedly under the respectable title of “investment”.

It was this enticement of investors into rampant speculation which made possible the unexampled duration and extent of the 1928-1929 advance, which also made the ensuing collapse correspondingly disastrous, and which – as later appeared – carried the business structure down into ruin with the stock market.

But like most sound ideas in Wall Street, this one was carried too far. It resulted in excessive emphasis being laid on the reported earnings – which might only be temporary or even deceptive – and in a complete eclipse of what had always been regarded as a vital factor in security values, namely the company’s working capital position.

Businesses have come to be valued in Wall Street on an entirely different basis from that applied to private enterprise. In good times the prices paid on the Stock Exchange were fantastically high, judged by ordinary business standards; and now, by the law of compensation, the assets of these same companies are suffering an equally fantastic undervaluation.

Second, companies issued new shares to use the proceeds to pay off debt and grow the business. Both are, arguably, reason enough to issue shares. But the speculation and frenzy for stocks was so rampant that new issues were bought on margin – essentially transferring corporate debt to the public – while diluting shares and earnings in the process.

The current contrast between market prices and liquid assets is accounted for in large measure by the huge flood of new cash which stockholders in recent years have poured into the treasuries of their corporations by the exercise of subscription rights. This phenomenon, which was one of the distinguishing features of the 1928-1929 bull market, had two quite opposite consequences. On the one hand the additional funds received greatly improved the companies’ cash and working capital position; on the other hand the additional shares issued greatly increased the supply of stocks, weakened their technical position, and intensified their market decline. The same circumstance, therefore, served both to improve the values behind a stock and to depress the price.

Meanwhile, the prodigal transfer of cash by the public to corporations in the new-era days has not only made infinite trouble for the security holder, but it has seriously demoralized our banking structure. Commercial loans have always been the heart and the bulwark of our credit system. Loans on securities have been secondary in volume and drastically subordinated in their standing.

But what have corporations and the public done between then in recent years? They have paid off the cream of the country’s commercial borrowings and substituted security loans in their place. Instead of lending directly to big business, the banks have been forced to lend to their stockholders against pledges of their shares, or to purchase securities on their own account.

Finally, a change in investor behavior drove it all. Greed lead the market higher in ’28 and ’29. Fear pushed prices so far down.

It is doubtful, however, that the declines would have gone to the current extraordinary lengths if during the last decade investors had not lost the habit of looking at balance sheets. Much of the past year’s selling of stocks has been due to fear rather than necessity. If these timid holders were thoroughly aware that they were selling out at only a fraction of the liquid assets behind their shares, many of them might have acted differently.

But since value has come to be associated exclusively with earning power, the stockholder no longer pays any attention to what his company owns – not even its money in bank.

A third reason why stocks now sell below their liquid asset value is the fear of future operating losses. Many readers will assert that this is the overshadowing cause of the present low market level. These quotations reflect not only the absence of earning power, but the existence of “losing power” which threatens to dissipate the working capital behind the shares today.

Is it true that one out of three American businesses is destined to continue losing money until the stockholders have no equity remaining? This is what the stock market says in no uncertain terms.

In all probability it is wrong, as it always has been wrong in its major judgments of the future. The logic of Wall Street is proverbially weak.