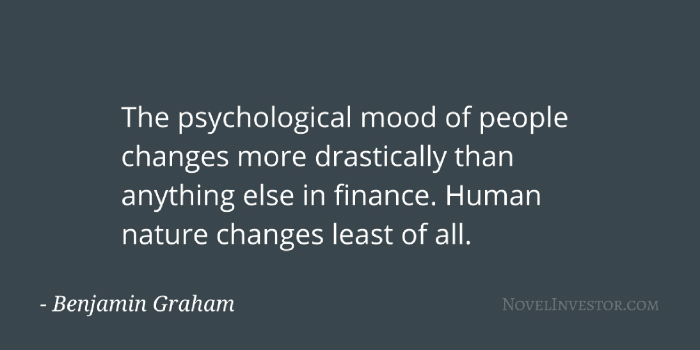 There are a lot of reasons why stock prices move the way they do. Business performance should account for all of it…in a perfect world. In reality, almost all of it is due to the human element in the market reacting to different stimuli.

Sometime in the 1950s, Ben Graham gave his thoughts on whether he believed this would continue in the future. He asks and answers the question – how will markets behave in the future?

First, Graham warns about being married to the factor(s) that currently drive the market because it won’t always do so. A new factor bubbles to the surface, takes priority, and the market reacts to it.

I want to stress this point, though it is based more on experience than anything else. When you have security price levels which in the light of the past are very high, there are always “good” reasons for them. One reason readily given as the motivation behind the present bull market, for example, is the inflation factor, and the fact of full employment threatening more inflation. But there is a danger in accepting this explanation one hundred percent, because the time comes when that factor, though it may still be just as true as it ever was, no longer controls stock prices to the same extent that it did. Something else comes in – namely, higher interest rates, or some temporary business setback, or some reappraisal of the situation, and that will cause a break in stock prices.

Graham goes on to explain how most people want to believe in a future Shangri-La market where stock prices more or less follow the performance of businesses but he doesn’t. He sees stock price movements as largely subjective thanks to human nature and psychology. He offered this example:

There is a large component of stock market fluctuations that will continue to come from the attitudes of investors and speculators, from the subjective element in stock prices. The excesses of optimism and pessimism will, I am sure, continue to produce the excesses of over-valuation and under-valuation in the market to which we have long been accustomed. The market cycle of the future may prove to be surprisingly independent of the business cycle, it may even exist if there is no business cycle – which is in itself quite an assumption, but not an entire impossibility. I am not yet ready to give up what has long been my favorite description of Wall Street – “plus ca change” – the more it changes, the more it’s the same thing.

Let me try to throw some light – and one or two paradoxical sidelights – on common stock price fluctuations. This subject is actually more interesting and more complicated than any of the problems I have covered up to now.

There is a second paradox related to the structure of common stock prices that I would like to point out. Under the modern attitude toward common stock valuations, the higher the quality of a company the more inescapable is the speculative component in its price, and the more subject it is to wide price variations.

The value of a common stock has come to be defined and accepted as being based upon the future earnings of the business capitalized at a rate appropriate to the quality of the company. When we are dealing with a very strong company we are dealing with a company in which there is the greatest confidence both as to the growth and stability of its future earnings. Hence the willingness exists to capitalize these earnings on an extremely liberal basis.

My own method for finding a “normal multiplier” is to take a group of securities like the Dow-Jones Industrials as a whole, which is a better than average group of stocks but does not consist of only the very best. A multiplier about equivalent to twice the long-term interest rate on high-grade bonds would yield a pretty good idea of the normal value of this group. That multiplier should be applied to ten-year average earnings rather than to single-year earnings, which cannot be accepted as the basis for sound valuation. This procedure would currently yield multipliers of between 15 and 17 for the Dow-Jones group.

One might say that securities of a better quality than this list as a whole would be entitled to a higher rate. But I have found from experience that when you get beyond a multiplier of 20 you are definitely moving over into the subjective or speculative area. You are beginning to rely a good deal on what investors are likely to think of your stock in the future. Conversely, of course, companies of poorer quality than the Dow-Jones list may be expected to have lower multipliers, going down to as low as 10 or 8.

You can also value good stocks not by taking past earnings and applying a high multiplier, but by taking estimated future earnings which are high and using a normal multiplier. Now what actually happens – the way the stock market often does it – is to estimate high future earnings and to use a high multiplier in addition. There is then a tendency to count the same trick twice. As a result, you find that the larger part of the price of high-grade companies may reflect merely the subjective views of the investors, and the degree of confidence that they have at the moment in the future of these companies. That is the characteristic which is subject, inescapably, to a wide degree of variation. The psychological mood of people changes more drastically than anything else in finance. Human nature changes least of all. So what you have is a combination of great fluctuations in the mood of investors, and practically no change at all in their essential characteristics. That is the “built-in destabilizer” of the stock market – the factor that can make for market fluctuations irrespective of overall economic stability.

As Graham points out, prices are very subjective. Today, probably the most subjective thing is whether a company fits the definition of quality. The market seems to slap that label on companies with little to no history of earnings all the time.

It’s easy to see how someone can rationalize their assumptions, especially if they get caught up in the price action. They trick themselves into believing prices should be higher because company earnings have been high and will go higher and the market will pay a higher multiple for those earnings. Both need to be right to make money. History would suggest that earnings rarely move in a straight line, even for the most consistent earners, and predicting what the market will do is nearly impossible.

And yet, these mistakes of the past are continually repeated. Emotions still drive impulsive decisions and human nature won’t change anytime soon. Being aware of this is important, but accounting for it is the best way to avoid the cycle of mistakes.