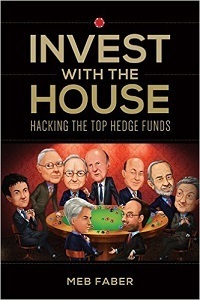 The idea of investing alongside great investors is nothing new. Investors have attempted to emulate Buffett for decades. Studies, stock screens, and more try to decipher exactly what drives his performance. But what if they settled for a close second and just copied him?

Invest with the House, by Meb Faber, answers that question and more.

Buffett’s not the only one with a track record of beating the market. The book digs into twenty successful hedge fund managers (most managers fall into the value camp though each has a slightly different style), clones their stock picks, compares the results to the market (the S&P 500), and provides an easy process to follow.

Essentially, Faber created a stock portfolio for each fund manager, going back to 2000, based on an equal weighting of their ten largest holdings at the time and rebalanced quarterly as holdings changed.

Now, this entire premise might go against everything you believe. That’s fair. Like it or not, there are many ways to invest and this is just one. Stock picking is hardly the easiest and certainly not for everyone.

And like those other strategies, this one works best when you follow it to the letter, which brings us to the biggest downside – it’s not the strategy, it’s the user.

You actually have to pick a fund manager – one with a proven track record and an investment style you can actually track – and stick with them. The book hints at picking more than one. Choose managers with slightly different styles, so you diversify your sources.

The hardest part is sticking with the strategy even when the manager’s style is out of favor. None of the fund managers covered in the book beat the market every single year. All of them experienced two or more losing years, with at least one year of double-digit losses.

Fall short of the market for a few years or suffer a loss and some investors start fine-tuning their strategy. They change the rules – instead of choosing the ten largest holding, they leave out one or two – or they stop following the rules entirely. They think they’re making it better. In reality, they make things worse.

Looking back, it sounds easy enough to follow someone like Warren Buffett until you consider how many times people questioned, “Has Buffett lost his touch?” That’s not to be outdone by the chorus, “Is value investing dead?” that arises every few years.

Following this strategy means you have to ignore all that noise. It’s not impossible, but it’s also not easy. To steal the opening line of the book – “Stock picking is hard – really, really, hard.”

That doesn’t mean it can’t be simple.

So if I haven’t entirely ruined the book for you already, check it out. Invest with the House is a fun, quick read covering a simple process of cloning great investors.

I wanted to quickly share a few tools I’ve used to track fund manager holdings (the book has a complete list of sources):

The earlier Buffett study: Imitation is the Sincerest Form of Flattery: Warren Buffett and Berkshire Hathaway

I should probably point out the obvious just in case. Returns are before fees, taxes, and other costs and must be considered. The 15 year period covered was short from an analysis standpoint and generally advantageous for value investing. A longer view would have been better.