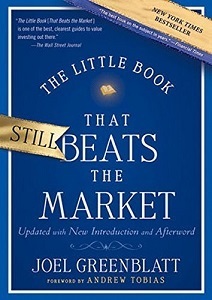 The Little Book that Beats the Market is Joel Greenblatt’s attempt to explain investing to his kids. In that, he succeeds. But it also offers some insights into his simple investing strategy.

If you’ve read any value investing books before, the first half this Little Book will be familiar. Greenblatt understands that investing is not easy. It takes discipline, work, and patience – areas where investors fail – to put up with manic Mr. Market. Greenblatt offers up his Magic Formula to help the cause.

Greenblatt based the concept of his formula off of another investing strategy by Ben Graham. Graham came up with a simple strategy that bought a basket of 20-30 stocks that were cheap enough to meet Graham’s specific requirements, and without doing additional work, the “results would be quite satisfactory”.

Graham showed that a simple mechanical system – when followed to the letter – can achieve consistently good returns over time. Essentially, Graham set specific rules on what type of stocks to buy, how many to buy, and when to sell. It was built in a way that, on average, he bought bargains that produced “satisfactory” returns.

Greenblatt adapted Graham’s rules to meet his own requirements for what type of stocks to buy. First, he kept Graham’s focus on buying stocks at bargain prices. Then he added a second requirement for high-quality businesses.

In this way, the Magic Formula produces a relative ranking. Each company is ranked in relation to every other company. If every company is expensive, the highest quality, cheapest expensive stock is ranked #1 and so on.

And the results were good. From 1988 to 2009 his strategy earned 23.8% per year, beating the market return of 9.5% per year. (Note: most independent backtests I’ve seen didn’t come close to replicating these results, though they still beat the market average over the same timeframe.)

At the basic level, this concept should make sense. When you buy high-quality businesses at bargain prices, you should get superior results. The hard part is finding a way to measure for quality and bargain. Greenblatt shows you one way to do it in the book (there are alternative ways), so that – on average – the basket of stocks produce enough quality bargains to produce good results.

Now, I guarantee most people will focus in on the details of the formula and skip over the broader lesson. The details prove correct. Greenblatt’s formula – buying quality businesses at bargain prices – works over time. The metrics he uses to rank stocks, produce solid results.

I believe the broader lesson is more beneficial. A simple mechanical strategy – telling you what to buy, how many to buy, and when to sell it – is the best way to add much-needed discipline to investing.

The problem, as Greenblatt found out, is that humans don’t always follow the rules. At the end of The Little Book that Beats the Market, he admits that both he and his kids had trouble following his simple strategy.

It turns out, the best results – out of all investors following his Magic Formula – were achieved by investors who let someone else do the work for them.