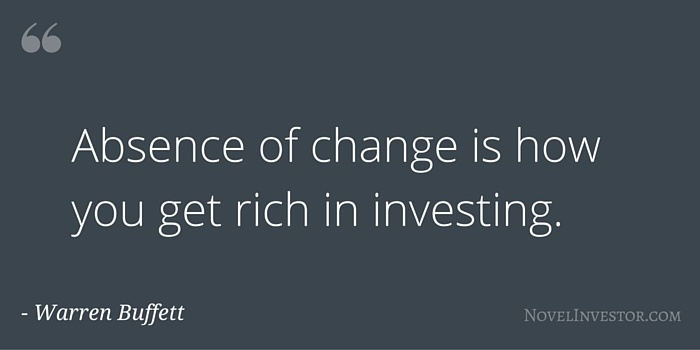 I wanted to share some excerpts from an old Q&A session Warren Buffett had back in 2003. In it, Buffett spends a good amount of time covering competitive advantage.

I think it’s important because often times people chase the next big thing, the tech of the future, or some hot IPO. There’s always a fantastic story spun around new companies, so full of potential with barely an ounce of ink spilled on the risks.

They’re looking for a lottery ticket.

What you get are tiny bubbles in these areas that rise from early enthusiasm then crash once people realize it won’t be nearly as game changing or it will take a lot longer to realize profits than originally expected.

The buzz around 3D printing a few years ago comes to mind. Everyone would have a 3D printer in their home. You’d never have to buy anything again because you could just print it up at home. At least, that was the story being sold.

All the while, the good boring companies – one’s that don’t really change much – just keep plugging along at a fairly consistent pace earning good returns for shareholders. That consistency adds up. It compounds over time.

Anyways, here’s Buffett on why he likes the good boring companies.

The airline business, it’s been the great capital trap of all time. If you look at the history of the airline business, it’s been about a hundred years exactly. No money has been made transporting people. I mean, just imagine, you go back to Kitty Hawk in 1903 or whenever it was, and you have this picture all of a sudden of what it’s going to look like with planes carrying four hundred people, going coast to coast in five hours and all of the things that would open up. And you say, you know this is unbelievable. Everybody’s going to get rich. And yet, it’s been a loss, in spite of all the capital that’s been put in.

If there’d been a capitalist down in Kitty Hawk he should have shot down all of them. There’d be a statue of him in my office. Here’s the man that shot down Orville and saved us all a fortune. But the reason it’s a lousy business is because the equipment is so expensive and also because of the costs. And because it’s a commodity business to a big extent. I mean, in the end, if you’re running XYZ Airline and you open up USA Today in the morning and your competitor’s advertising a lower price, you’ve gotta match it that day.

That’s not true if you sell See’s candy, like we do in the West, or something of the sort. You just tell people that cheap candy’ll kill you. If you’re in the commodity business, with huge capital requirements, heavily unionized, it’s just going to be a capital trap. And that’s been the case.

I mean the best kind of business to be in is something where you sell something that costs a penny and sells for a dollar and is habit forming. We haven’t found that yet but we sell things a little like that. We sell candy in the West, See’s Candy.

Our company saw what is apparently a come to Jesus moment. Can you imagine going home on Valentine’s Day, you know and saying, there’s my sweetheart and unwrap this box saying Happy Valentine’s, Dear, I took the low bid. Price is not a determining factor. If you are selling something for five dollars a pound, you don’t have to worry about somebody selling for $4.95 a pound and taking away the market like you do in a lot of things. It’s what’s in the mind that counts.

But it’s going to be something in the mind about it that makes people feel good about the product. So someone else is selling something in a can for one penny less—they don’t shift.

Telecom is not a business I understand very well. I have no insights into that business. It’s always struck me as a very competitive commodity type business, capital intensive. It’s just not a game where I have any kind of any interest at all. I’d rather sell candy or something of the sort, where you can understand the competitive advantage. But I don’t like businesses that are going to change a lot. I like Gillette, you know a hundred years ago almost, they were the dumb regular blade. Like value, they sell over 70 percent of the blades to the rest of the world, in the world—70 percent. Everybody knows how to make them; they don’t have to steal the technology; they don’t have to distribute them. But here’s a company that has 70 percent overtime. So it’s a great, great business. It will dominate 10 years from now. Dominate 20 years from now

Absence of change is how you get rich in investing. If you buy something that’s very good and you don’t worry about it changing on you and there’s certain mysteries that run themselves with that, there’s certain industries that don’t. Anything with a lot of technology is something to be very wrong on in a short period of time. Now people say you can be very right on it too but I don’t know enough to know the difference. I haven’t run into very many people that do, occasionally people think they do but it’s very hard to predict.

Peter Lynch says when you buy stock, buy into a business that’s so good that even a dope can run it, because sooner or later one will. There’s a lot of merit to that. If you just buy businesses that your idiot nephew can run, you’re going to do all right. You don’t want a business that a genius has to run. That’s the worst kind of business in the world really.