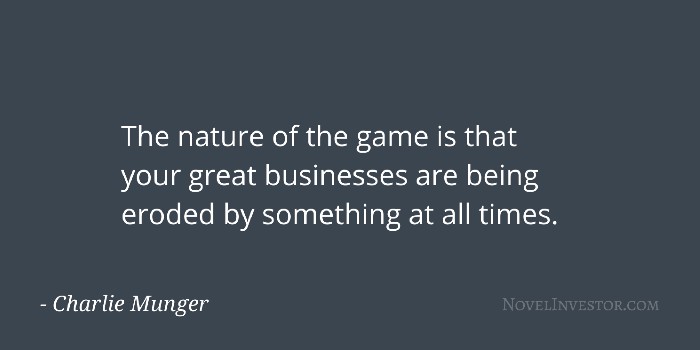 I’m in the middle of transcribing Charlie Munger’s unofficial Q&A session after the recent DJCO meeting. He was kind enough to stick around afterward for pictures and questions and someone was nice enough to record some of it.

Charlie shared a lot of interesting thoughts and I wanted to quickly share a bit of it here. The transcript will be available in the Library once I finish.

Question: Charlie, do you think businesses are becoming more fragile with technology and transparency?

Charlie Munger: Well, our ancestors were pretty good at creating fragile moats too. I think it’s natural that what’s up in one era…Think of what I’ve lived through in [unintelligible]. DuPont looked impregnable. General Motors was the strongest corporation in the world. Kodak was one of the…Boom, boom, boom. They’re gone. Xerox. I mean, it is hard to keep winning and the world keeps changing.

Look, the Daily Journal is hard. Imagine going into computer programming, dealing with a lot of agencies all over the world, including South Australia. Little company like this, it is not a bit easy. And if we hadn’t done it, we’d just be one more dying newspaper.

Q: Can you talk more about the airlines and what’s changed from a couple decades ago to now?

CM: Well, I don’t know that much about it but I do know that it’s much more concentrated now and there’s no real substitute for it. It isn’t like we have a substitute for air travel and it’s down to a relatively few players.

In the old days, they could always start a new airline. They hire nothing but young people, they pay their pilots less, they don’t have a union, and they could just start hitting the prices. They just kept ruining the business over and over again. And even now Southwest is just starting to go to Hawaii.

So the vicious competition is continuing, including people doing it – governments own these airlines and do it to show how strong they are. So, I don’t regard it as a perfect model and I don’t think it’s the greatest idea we ever had. It’s just something, considering how pounded they were and how the world has changed a little, we thought, as I say, we had a little advantage by that particular gamble. It’s not that we…It’s not a cinch.

Q: Is there an outlook on oil prices embedded in that investment?

CM: I don’t think oil prices will make that much difference over the long term to the…It’s not that…if the kerosene price doubles over the time, I don’t think it matters that much to the airlines. It’s still, you put a hundred people in an airliner and fly somewhere, it’s pretty efficient. And you can do a lot of flights per day. And it’s worth a lot of money for people to take the trip. And there’s not going to be a new airport in Shanghai, you know. A lot of the airports are fixed. A lot of them are out of capacity.

It’s obviously better than it was in the past. Whether it’s good enough so it will do well, I don’t know. Also, if it starts working, you get paid in advance for the tickets. So there’s no credit and a lot of people lease the airliners. So if you make money, you can pile up pretty rapidly in cash.

Q: Is there a reason JetBlue wasn’t in there?

Q: When industries like airlines or railroads rationalize and turn around, how do you and Warren know?

CM: We don’t know. It was easy to see in the railroad. We waited till it was all over before we went in. In the airlines, it’s not over but it’s a little bit the same story. Years of consolidations and bankruptcies. Three, four, five, six big bankruptcies already in the airlines.

Q: So for fifty years you’ve continually read about these industries even though you have disdain for them?

Now, that doesn’t help you very much, does it? I’m sorry but that’s the way it really happened. If you can’t do it, I didn’t have a lot of ideas. I didn’t find them that easily, but I did pounce on one.

Q: Which one was that? Which idea was that?

CM: It was a little automotive supply company. Anyway, it was a cigar butt.

Q: Was that [unintelligible]?

Q: What did the article in Barron’s say?

CM: It said it was a cheap stock. But that’s a very funny way to beat a watch for fifty years and act once.

Q: How long did it take you to make that 15 bagger on that stock?

Q: How long did it take to make that 15x on that stock? You went from one to fifteen right?

CM: Maybe a couple of years.

Q: How long did it take to make the decision to buy it once you read the article?

Q: What was it about that company, an auto supply company that [unintelligible]?

CM: Well, I kind of knew, based on experience, how sticky some of that auto secondary market was. Not many old cars needed Monroe shock absorbers and I just knew it was too cheap. I didn’t know it would work for sure, but I knew…I just, as I say, people were afraid it was going broke if their bonds were selling at 35.