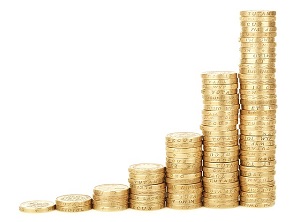 Have you ever picked a number and doubled it over and over again until you can’t do the math in your head? The magic of compounding drives the numbers so high, so fast. Of course, this works with money too, just at a slightly slower pace. It’s called compound interest and it’s one thing all of us can take advantage of now no matter how investment savvy you are.

The most repeated financial advice is to save and invest early. Saving early puts time on your side and compounding plays a big role in that. The best way to show compound interest in action is with an example:

Joe and Sue are both 20 years old and are offered the investment of a lifetime, 10% interest on a $5,000 investment for the next 45 years. But they must make a choice:

Joe likes getting paid. He already has ideas on how to spend his first interest payment. Sue, however, has her eyes on the future. She chooses to reinvest it.

Joe deposits his money and each year looks the same:

Joe happily takes his $500 in interest each year. After 45 years, nothing changes. He still has his original $5,000 and 45 years of spent interest.

Sue has the savings bug and knows that interest will eventually earn her far more money over time.

Those first few years of compounding are boring, but Sue stays patient because each year her interest earned is higher than the last. It’s not by much, but the snowball effect is starting to work.

Right around the ninth year things get exciting. Sue finally earns enough interest to double her first deposit. Soon her interest is earning more than her original $5,000. She’s earning interest on her interest. That’s the power of compounding.

Whether it’s interest rates, bond yields, or dividends, the Rule of 72 gives you an idea of how long it takes to compound your money.

Don’t Let It Work Against You

As great as compounding is, it often works against you. These five enemies of compounding gnaw away at its power:

Basic math does some funny things to money over time. Compound interest starts off like a snail, which is probably why so many people ignore it at first. Once, it gets started it accelerates exponentially the longer you let it go. Unless you have a billion dollar idea in your head, compound interest is the next best thing to wealth.