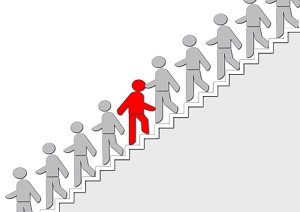 Just like arguments, there are two sides to every investment. Behind that are investors reacting to news, both good and bad. When enough people believe the news, it moves prices. Sometimes that information is spot on and it warrants a price swing. Other times it’s not, yet the majority reacts anyways. That is where contrarian investing comes in.

When everyone is running for the exits, most people don’t think to walk inside. Most just follow along and head for the door. It may sound counterintuitive to go against the grain. Yet, a contrarian investor sees an opportunity, does the opposite, and walks inside.

What Is Contrarian Investing

Contrarian investing is an investment strategy that goes after the unpopular choice, the beaten down stock (or sector), and doesn’t follow the crowd.

Contrarian’s believe the market can overreact in both directions. For example, stocks over and under shoot their real value all the time. It’s the contrarian investor who takes advantage of the big swings in prices caused by the majority, the herd mentality. The moment a few start selling, everyone else follows suit and the thing falls like a house of cards.

It’s like hearing “Fire!” in a crowded theater when there’s no sign of smoke. Your instinct tells you to leave. Once you realize there’s no fire, the coast is clear, you head back inside.

Investors act similarly. The contrarian play takes advantage of the time-lapse and price swing between overreaction and realizing its safe. While everyone is selling, the contrarian is buying and the opposite is also true. The contrarian sells once everyone starts buying.

Still, there needs to be a reason to invest. Something everyone else is discounting, overlooking, or ignoring. It could be a short-term issue disguised as a long-term problem, but underneath it all, lies the qualities of a great investment. This would align it with a value investing strategy.

It could be a bad company that’s been beaten down by bad news. One that was just overly punished from investors fleeing the stock.

It’s not always about taking advantage of fear either. Excitement and hype can move stock prices higher just as quickly. While there’s more risk in shorting stock, especially a stock surrounded by hype, a short sale can be a gutsy contrarian play. If it’s timed perfectly, it can really pay off.

There are number of recent examples: