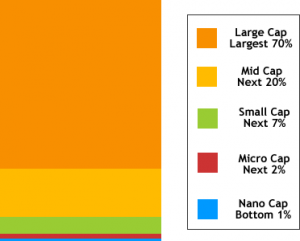 You see the terms large cap, mid cap, and small cap when describing a company, mutual fund, or ETF. What do they actually mean? How do they impact an investment strategy?

The “cap” portion of these terms is short for market cap or market capitalization. A company’s market cap is the total market value of a company. This is found by multiplying the stock price by the total outstanding shares of the company.

What is a Large Cap?

Large cap refers to the largest companies traded on the stock market and have a market cap of $10 billion or more. They, also, tend to be the most followed by analysts and investors.

Historically, large cap companies experience a slower growth rate and have less risk due to their size and stability. Because of this many large caps are given the Blue Chip designation. A few well known large cap companies include Microsoft, Walmart, Amazon, and Nike.

A mutual fund or ETF categorized as a large cap fund will invest most of the funds money in large cap companies.  By doing this the fund is looking for slow, steady, and consist growth. These funds tend to avoid the erratic swings in the day-to-day stock market. Though large cap funds still hold some risk as an investment, they are seen as less risky than a mid or small cap fund.

What is a Mid Cap?

Mid cap refers to a company in the middle of the pack as far as market capitalization that ranges from $2 billion to $10 billion. Most mid cap companies experience higher growth than a large cap company. Because of this they also have a higher risk associated with them. A few well known mid cap companies include Goodyear Tire and Rubber, Tupperware, Southwest Airlines, and Whirlpool.

A mutual fund or ETF categorized as a mid cap fund will invest most the funds money in mid cap companies. These funds are looking for higher growth rates and take on more risk than a large cap fund. Mid cap funds are one of the most popular choices of funds available because they fit the risk and growth potential of the average investor.

What is a Small Cap?

Small cap refers to a company that it is relatively new and has a market cap of $250 million to $2 billion. Of the three, small cap companies represent the most investment risk but also the highest reward.

Those well known large cap companies (Microsoft, Walmart, Amazon, and Nike) were all small caps years ago. Back then, they had a very high investment risk but the upside growth potential would have turned a meager investment into millions. Of course, most small caps never reach the heights of a Walmart. Most fail to ever get past the mid cap status. A few well known small cap companies include Buffalo Wild Wings, Pappa John’s Pizza, Revlon, and Boston Beer Co.

The next time you’re making changes to your portfolio, do a little research before hand through your online broker or other research site.  The market capitalization alone will give you a good idea of the amount of risk that is involved with each investment.