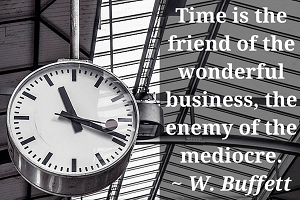 Dividend investing seemed to get more popular after the financial crisis. Not that investors didn’t want dividends before then, but a good crisis can make investors rethink and change their strategy. In hindsight, the trend toward dividends makes sense. But why?

From my perspective there are a couple reasons. The financial crisis was harsh enough that investors turned toward “safer” investments.

Dividend stocks aren’t really safer than other stocks. They have their own unique risks. By safer, I mean less volatile, which generally is true, and less volatility was in high demand after the crash.

Throw in falling bond yields and you get even higher demand for dividends.

The downfall of dividends is that it’s not always the best use of company earnings. Sure, shareholders get paid, but companies need to reinvest earnings to continue growing. This forces investors into a decision – to be paid more now or patiently waiting to be paid more later?

I’d argue the latter is a better option through dividend growth stocks. To explain why, I’ll use Coca-Cola as an example.

Let’s get the legal stuff out of the way now. This is not a recommendation to buy, sell, or drink Coca-Cola.

Coca Cola (KO) has been a great investment since Buffett bought it back in ’88 and ’89. He literally pats himself on the back every time the media asks him about it. Coca-Cola’s stock appreciation alone easily beats the S&P 500’s total return:

Had you followed Buffett into Coca-Cola back in 1988 and never sold, you would have seen a steadily increasing dividend yield on your initial investment.

At first it would have been like many other dividend stocks at the time. Based on the split adjusted stock price on January 1, the dividend yield would have been 3.01%. The chart below tells the rest of the story.

By 2014, the rising dividend payout would have pushed your yield up to 49%. You would have seen an increasing stream of income. You could have reinvested the dividends into new shares, compounding your total returns or taken it as income. What you get is the perfect example of dividend growth investing.

Coca-Cola is one of the rare companies around that raises it’s dividend every year because it consistently grows earnings. Sugar water is a fairly stable, low cost business. The Coca-Cola brand drives pricing power, margins, and earnings. If management does a mediocre job, it’s hard to screw that up.

In the stock universe, only a few companies, like the Dividend Aristocrats (there’s an ETF for that), consistently grow earnings and dividends at a high rate. Typically, one is sacrificed for the other. A high yield stock tends to grow slower or not at all, while a high growth stock pays little to no dividend.