The stocks of great companies are not immune to deep drawdowns. In fact, it’s practically guaranteed to happen more than once.

Hendrik Bessembinder followed up on previous research with a deep dive into the greatest companies ever. His first conclusion shouldn’t be too surprising.

Bessembinder looked at the top 100 companies based on shareholder wealth creation by decade since 1950. He then measured the largest drawdown shareholders faced in that decade.

Investors in the greatest companies faced a drawdown of 32.5%, on average, despite being one of the greatest decades of performance ever. That was just the largest drawdown, on average. It says nothing of the second, third, and so on drawdowns during the same decade.

Bessembinder also looked at the decade, prior to the greatest decade of wealth creation, and found shareholders suffered an average drawdown of 51.6%. Again, that was just the largest drawdown for the previous decade.

The duration of the drawdowns fell in a wide range. Drawdowns lasted anywhere from a month to three years in the same decade of the company’s greatest wealth creation. In the prior decade (to the greatest decade), in some cases, the drawdown exceeded eight years!

You can find the complete data below. 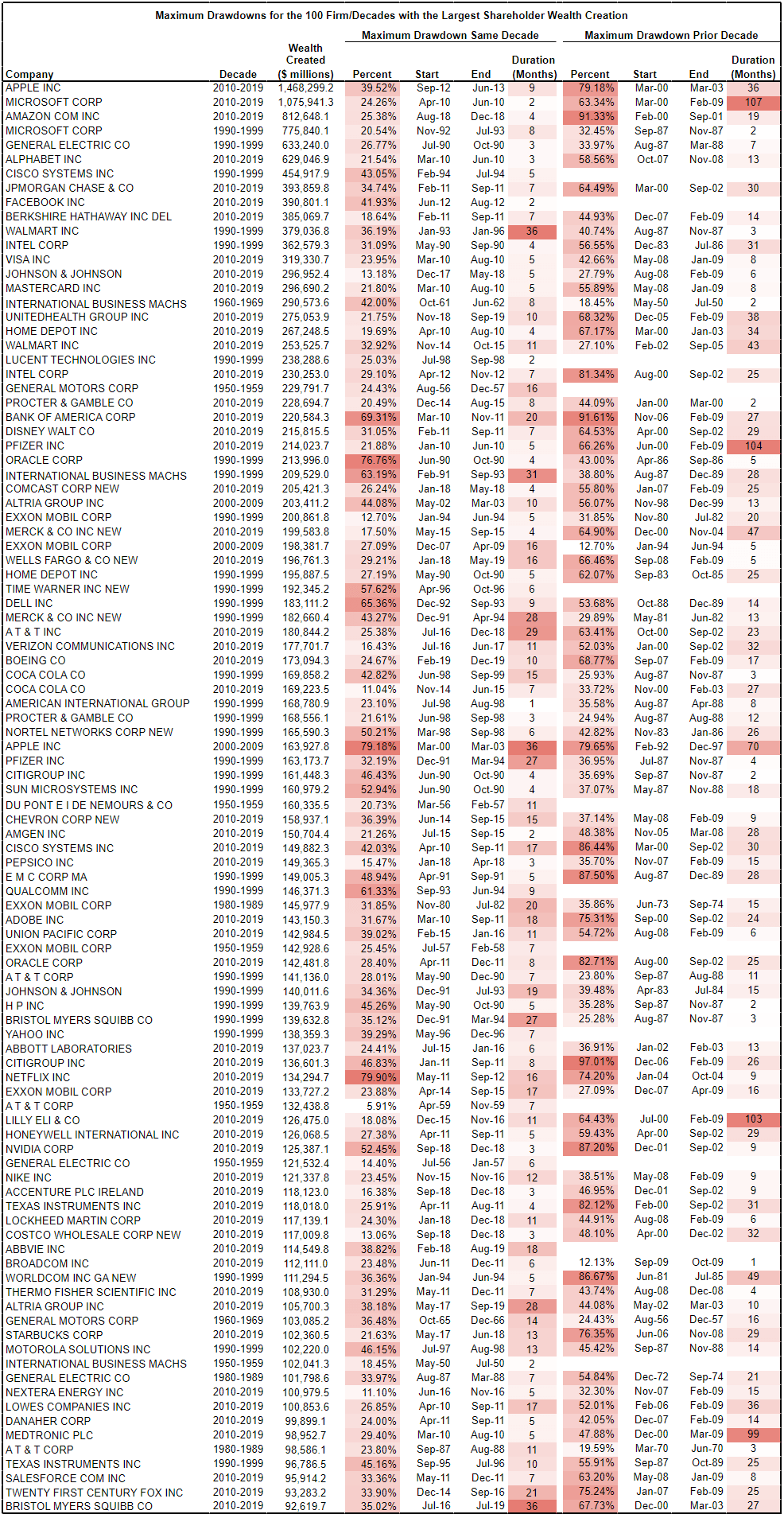 There are a few important takeaways from this:

First, sometimes great companies stumble. It can take management years to fix the problem (see Microsoft) or come up with a new product/innovation (see Apple) before the company moves in the right direction again. This can create multiple periods of massive wealth creation by the same company as seen in the table above.

Second, sometimes the market gets way ahead of itself in the short term. It gets the growth story right (see Amazon) but the timing is off by a decade. Expectations send the stock price soaring but once instantaneous growth is off the table, the price corrects, sometimes to the opposite extreme.

Third, and not surprising, long term shareholders must endure multiple, and sometimes painfully long drawdowns to reap great rewards. This would confirm that the hardest part of investing is often just holding on.

Fourth, investors have multiple chances to buy great companies at wonderful prices. They usually have ample time too. Now, the usual caveats apply. Neither the buying opportunity nor the greatness of the company is always obvious at the time. But the fact stands. Drawdowns are buying opportunities for patient investors who have done the work and identified great companies in advance.

The broader point is this. It’s up to investors to separate the company from its stock price because declines are inevitable. But a great company’s stock will not only recover but go on to be extremely rewarding.