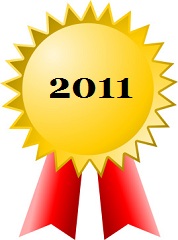 Part of having a finance blog offers me the opportunity to add my two cents every now and then.  With that in mind I’ve come up with the Novel Investor Best and Worst Awards for 2011, relating to stocks and ETFs that may or may not have been part of your portfolio this past year.

In order to come up with the stock list, I eliminated all penny stocks and limited the list to the more well known companies.  For the ETF list all leveraged ETFs were eliminated.  Something to keep in mind before getting into the winners or losers, these are not investment recommendations and past performance doesn’t equate to future performance so invest at your own risk.

In a time when debt has been the biggest topic in personal finance, Mastercard stock was one of the best performers of the year.  Finishing the year up 64%.  Thanks in large part to the growing cashless society we’re moving towards.  The Fed allowing banks to charge more for debit card fees didn’t hurt either.

Proof that not keeping up with tech trends is bad.  The maker of Blackberry phones has been destroyed with the advances in the smart phone thanks to the Apple IPhone and the growth of Android smartphones.  RIMM failed to get on board and has been killed because of it.  Starting off January at $58/share and ending the year around $14/share, for a loss of -76%.

My two cents is this company is done.  The current smartphone wars will come down to Android and Apple.  Very reminiscent of the operating system war of the 90s.  Android is the new Windows for smartphones.  Hopefully better, but there’s only one real winner in Google.

The company that killed Blockbuster had quite a ride in 2011.  Easily one of best stocks for the first half of the year and by far one of the worst in the second half.  Netflix started the year off at $175 a share.  Peaked at just over $300 a share in July.  Which would have a 74% return at the time.  But the stock fell back to earth, currently sitting around $73 a share.  Ending the year at -58%.  Anyone who sold in July made one of the best trades of the year and caused heartburn for everyone else.  Easily one of the best and worst stocks of the year.

This was one company I thought would perform well in 2011.  Was I wrong.  The growth of the Android platform and continued growth in search revenues has not stopped the company.  But the stock has been relatively stagnant throughout the year.  Starting 2011 at $600/share and ending around $630.  The CEO change was a big catalyst for the stagnation.  Offering proof that you should be skeptical of new management until performance proves otherwise.

A long running dividend play, McDonald’s has continued to find ways to grow despite the fact that it has 33,000 restaurants worldwide.  The stock finished the year up 29% and even raised its dividend to $2.80/share annually (a 2.82% yield).  Not bad for an industry leader that continues to innovate, grow and compete in the fast food business.

If I had kept track of all the companies that cut or cancelled its dividend payments in 2011, this pick would have been a lot easier.  But I didn’t.  So the award is based on stock performance or lack of, while maintaining dividend payments.

Whirpool’s pitiful performance (-44%) was based on a lack of appliance sales.  Understandable, when money is tight and home sales are low, Whirlpool tends to not do well.  Something to keep in mind in the future, if/when home sales finally start to pick up.  In the meantime Whirlpool did pay out a $2.00 dividend (currently 4% yield).

The unfortunate death of Steve Jobs puts the biggest question mark on Apple.  I’ve never been a big Apple fan, but it has been fun to watch this company, under Jobs’ leadership, entirely transform a tech company into a fashion icon.  Whether this company has the ability to maintain that innovation without the genius of Steve Jobs is uncertain.  This might be one of those companies you root for without investing in.  Maybe a dividend would change my mind.

If you had asked anyone if long term interest rates would drop in 2011, there would have been a resounding NO.  Long term government bond funds reaped the biggest rewards when the Fed pushed for low rates through 2013.  This fund category could have fit into any asset allocation at the beginning of 2011 and would have provided profits for many investors.

Going forward, I don’t see rates dropping any further but I thought the same at the beginning of 2011.  Possibly ending one of the best bull bond market runs in years.  Who knows, I could be wrong again.

The clean energy rage was not a good investment for 2011.  Lower oil prices helped with this bad performance.  But the biggest catalyst was a complete lack of government support.  Something this sector has been receiving over the past few years.  While the long term potential for gains is still possible, increased competition and consistently low oil prices will prevent this sector from performing well anytime soon.  Unfortunately the technology just isn’t advanced enough for change to be cost efficient without government subsidies.

Agree, disagree?  Anything you would change, let us know.  What were your best and worst of 2011?