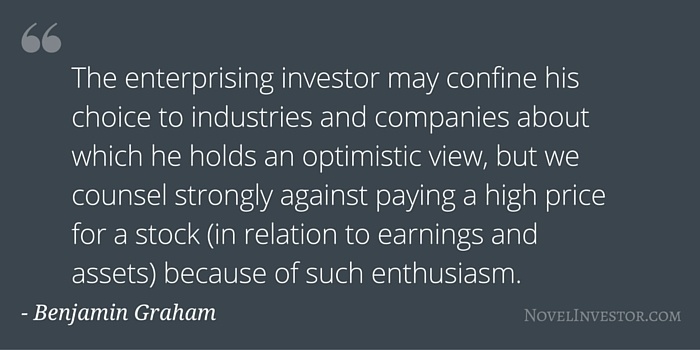 Popularity is fleeting. For some, it only lasts the proverbial “15 minutes”. For others, it drags on longer than any rational person can comprehend.

We see this in people and things. It explains why fads come and go. It eventually ends because there are not enough new eyeballs to replace the ones that lose interest or something newer and shinier comes along to draw our attention away.

Ben Graham noticed this popularity effect on stocks and briefly covered it in The Intelligent Investor:

Here we found – contrary to our investment philosophy – that companies that combined major size with a large good-will component in their market price did very well as a whole in the 2 1/2 year holding period. (By “good-will component” we mean the part of the price that exceeds the book value.)

Graham separated stocks into several groups based on a single factor to see how each performed over a 30 month period between December 1968 and August 1971. Each group held a basket of 30 stocks. The group in question held the largest stocks with the highest price-to-book value.

Our list of “good-will giants” was made up of 30 issues, each of which had a good-will component of over a billion dollars, representing more than half of its market price. The total market value of these good-will items at the end of 1968 was more than $120 billions!

Basically, these were the “most expensive” large caps trading over 2x book value. I think it’s a safe guess that the price-to-book was much higher. Yet despite the “expensive” price tag, the group outperformed all other tests and beat the market by about 15% for the period.

Here’s Graham’s explanation for why:

A fact like this must not be ignored in work on investment policies. It is clear that, at the least, a considerable momentum is attached to those companies that combine the virtues of great size, an excellent past record of earnings, the public’s expectation of continued earnings growth in the future, and strong market action over many past years. Even if the price may appear excessive by our quantitative standards the underlying market momentum may well carry such issues along more or less indefinitely. It is difficult to judge to what extent the superior market action shown is due to “true” or objective investment merits and to what extent to long-established popularity. No doubt both factors are important here.

I think Graham’s explanation does a good job describing potential drivers behind the momentum factor. Put simply, people like to buy stocks that are going up and avoid whatever’s going down. And if they feel good about stocks, they’re willing to pay more.

He goes so far as to say it’s something investors might consider. It’s just not something he’d consider since it goes against everything he believes.

Note: Graham doesn’t list the 30 stocks in the “good-will giants” group. Based on the few mentioned in the book – IBM, Xerox, Polaroid – and the time frame, I’m guessing several fit the Nifty-Fifty mold. For those who don’t know, The Nifty Fifty were a select group of high-growth stocks that reached a “buy at any price” popularity (much like the dot-com stocks of the late ’90s, except the Nifty-Fifty had actual earnings). The shiny thing was high earnings growth that initially got people’s attention, popularity and momentum drove prices higher. In some cases, investors were paying P/E multiples of 50x and higher. For a while, anyways, it worked…until it didn’t. What seemed like a great idea in ’68 became a terrible one in ’73 when the market crashed.