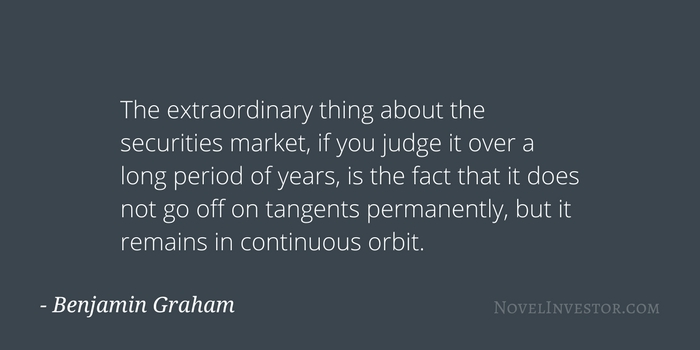 I finished reading a series of Graham lectures from a course he taught in 1946. The full transcripts are published online and linked below. The course focuses on potential problems in security analysis following World War II (Graham’s worry is the extrapolation of WWII market performance into the future).

Graham starts the course off by explaining the two important things you should know about the market. He calls the first one continuity:

First, with regard to continuity: The extraordinary thing about the securities market, if you judge it over a long period of years, is the fact that it does not go off on tangents permanently, but it remains in continuous orbit. When I say that it doesn’t go off on tangents, I mean the simple point that after the stock market goes up a great deal it not only comes down a great deal but it comes down to levels to which we had previously been accustomed. Thus we have never found the stock market as a whole going off into new areas and staying there permanently because there has been a permanent change in the basic conditions. I think you would have expected such new departures in stock prices. For the last thirty years, the period of time that I have watched the securities market, we have had two world wars; we have had a tremendous boom and a tremendous deflation; we now have the Atomic Age on us. Thus you might well assume that the security market could really have been permanently transformed at one time or another, so that the past records might not have been very useful in judging future values.

These remarks are relevant, of course, to developments since 1940. When the security market advanced in the last few years to levels which were not unexampled but which were high in relation to past experience, there was a general tendency for security analysts to assume that a new level of values had been established for stock prices which was quite different from those we had previously been accustomed to. It may very well be that individual stocks as a whole are worth more than they used to be. But the thing that doesn’t seem to be true is that they are worth so much more than they used to be that past experience — i.e., past levels and patterns of behavior — can be discarded.

The lesson of market history is not “the returns”, but to show how the market behaved. Prices move up and down. Markets go through cycles. Investor behavior moves along with it. And no matter how many times someone claims the cycle is broken – that prices are permanently high or low – the market eventually proves their claims wrong.

The second thing that I want to talk about is selectivity. Here is an idea that has misled security analysts and advisers to a very great extent. In the few weeks preceding the recent break in the stock market I noticed that a great many of the brokerage house advisers were saying that now that the market has ceased to go up continuously, the thing to do is to exercise selectivity in your purchases; and in that way you can still derive benefits from security price changes. Well, it stands to reason that if you define selectivity as picking out a stock which is going to go up a good deal later on — or more than the rest — you are going to benefit. But that is too obvious a definition. What the commentators mean, as is evident from their actual arguments, is that if you buy the securities which apparently have good earnings prospects, you will then benefit market-wise; whereas if you buy the others you won’t.

History shows this to be a very plausible idea but an extremely misleading one; that is why I referred to this concept of selectivity as deceptive.

He relates the call of it being “a stock picker’s market”. So all you have to do is pick the stocks that should do well and avoid the stocks that won’t. Seems easy enough, but if it’s that easy and obvious, well…here’s Graham:

Now my point in going at these two things in such detail is to try to bring home to you the fact that what seems to be obvious and simple to the people in Wall Street, as well as to their customers, is not really obvious and simple at all. You are not going to get good results in security analysis by doing the simple, obvious thing of picking out the companies that apparently have good prospects — whether it be the automobile industry, or the building industry, or any such combination of companies which almost everybody can tell you are going to enjoy good business for a number of years to come. That method is just too simple and too obvious — and the main fact about it is that it does not work well.

Howard Marks refers to this as first-level thinking in his book:

Second-level thinking is deep, complex and convoluted. – The Most Important Thing