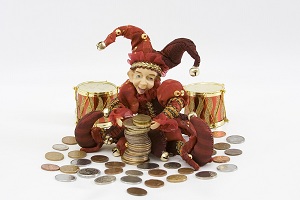 There’s a sucker born everyday and that’s the basis for the greater fool theory.  When enough fools jump on an asset bandwagon, it can look like an unstoppable force and a bubble is born.

The greater fool theory was in place and going strong during the internet boom.  It worked wonders until the housing market went bust.  It might even be alive and well in the gold market, with some gold bug holding the bag in the end.  At some point, it will even strike Apple’s stock.

The theory thrives as long as someone, somewhere will pay more.  It works until it doesn’t.  Then it collapses like a giant house of cards.

The greater fool theory states that it is possible to make money buying assets only to sell them later for a profit because there will always be someone (a greater fool) willing to pay a higher price.

The point is that stocks, bonds, real estate and any other investable asset may be valued on something other than earnings.  Stock prices, for example, can be based on fundamental or technical analysis, dividend payouts, risk, growth rate, lack of competition, or because one crazy fool believes he can sell it for 10x its current value with nothing to back it up.  The reality is everything has a value that is entirely tied to what someone else is willing to pay for it.

This tends to be more true in the short-term swings of the market, where prices fluctuate on daily rumors and news.  But over the long-term, the real value will eventually show itself.  Which is the basic belief of the value investing strategy.  So how do we avoid the market hype and stick to what really matters?

Don’t Be The Fool

Can you buy something just to resell it for a profit?  Sure.  It happens in the market everyday.  At some point everyone gets to play both sides of the greater fool theory.  It’s inevitable.  The hope is that when it’s our turn to be the greater fool, we don’t get burned too badly.

The key is to avoid the hype.  A simple ideal if you can cut emotion out of investing.  So it’s best to focus on some of the basics:

Financial markets are filled with booms and busts throughout history.  Each bubble flourished and failed on the greater fool theory.  It just proves the inefficiency of the markets.  But inefficient means opportunity for value investors and it’s a healthy reminder to stick with the basics.  As the great philosophers Public Enemy once said, “Don’t believe the hype!”