I read a few newsletters to keep me updated on what other people think. One of those is Richard Bernstein’s since he offers monthly research from a top-down, macro view of the economy – something I don’t spend much time on – because it’s nice to get an intelligent viewpoint from that perspective.

His latest newsletter points to one flaw in the current thinking behind what drives bull markets:

This table taken from the newsletter shows PEs at past profits recession troughs since 1935 compared to PEs one year after the trough, along with S&P 500 total returns. 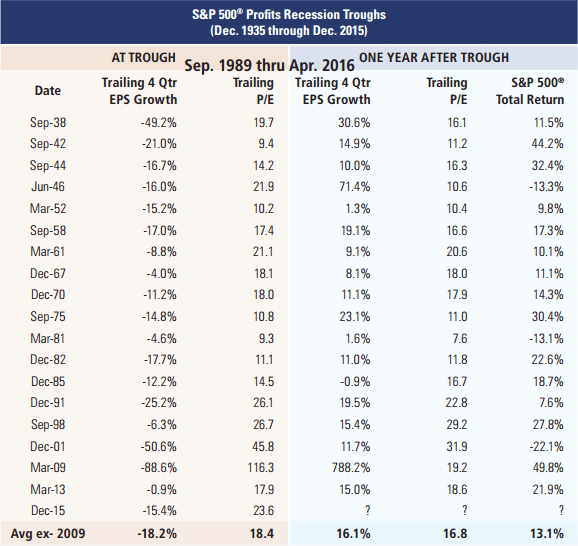 You’ll notice not every subsequent one-year period had a higher PE and a positive S&P 500 total return.

Some market observers have cautioned that overvaluation always leads to poor returns because multiples contract. There is indeed history to support such concerns. However, the key word is “always”. As we have shown, there have been many periods in stock market history during which earnings growth improves, interest rates increase, PE multiples contract, and a bull market continues. They are called earnings-driven bull markets.

It is always headline-grabbing to predict a calamitous end to a bull market, and a broad range of sentiment data strongly suggests investors are quite scared.

The PE ratio is what we called a fraction in grade school math. There are two ways fractions get smaller, or this case, PEs fall.

Most people focus on the numerator – Price – getting smaller because it’s on top. Price is the first thing they think about and it makes big news when someone says PEs are too high thus prices must fall.

They rarely think about the denominator – Earnings – getting larger, which is what Bernstein is pointing out. Earnings have the potential to revert just as much as price does.

One possibility for why earnings could rise is a weakening dollar. Or something else could boost earnings. Or prices could fall. Whatever does happen, falling prices are only one way for PEs to fall and you don’t need rising PEs to drive a bull market.