I re-read Ben Graham’s The Interpretation of Financial Statements this week. It’s a manual on, you guessed it – how to read financial statements. Okay, it’s not a thriller, but it’s barely 100 pages long and you can finish in an afternoon between naps.

At the end of the book, he briefly covers the difference between stock prices and values. This was 1937. Graham was well ahead of his time:

When neither boom nor deep depressions is affecting the market, the judgement of the public on individual issues, as indicated by market prices, is usually quite good.

Then he goes to say when it’s not:

There is, however, a frequent tendency on the part of the stock market to exaggerate the significance of changes in earnings both in a favorable and unfavorable direction.

Of course, you saw this with the boom and bust of internet stocks. Everyone believed it was the next big thing. They were right. They just had the timing wrong. Had investors known it was big, but would take a decade to realize the potential, stock prices would never have become that detached from reality.

A more recent example is Molycorp (MCP). I saw a news headline for this company yesterday – it’s filing for bankruptcy protection.

You might remember the hoopla around rare earth elements used in high-tech products like magnets or smartphones. This was in late 2010, early 2011.

As Graham put it:

The price of common stocks will depend, therefore, not so much on past or current earnings in themselves, as upon what the security buying public thinks the future earnings will be.

Rare earth prices rose and Molycorp stock soared. It was a daily topic on CNBC (which only helped to fuel the story). The stock rose to $74. 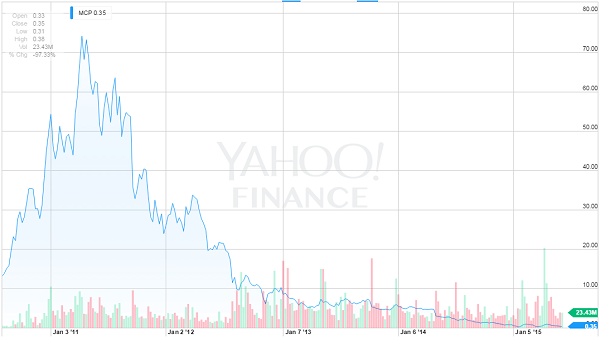 Expectations were ridiculously overblown. I’m sure a few people made money, but most investors got crushed.

It was a great story. That’s the problem.

The ability to buy securities – particularly common stocks – successfully is the ability to look ahead accurately…It requires a skillful mental balance between the facts of the past and the possibilities of the future.

Stories always have a happy ending. It triggers your emotions. Everyone piles in expecting great returns. Few people bothered to do the research and ask – what if?