The coolest thing I saw this week was a new resource by Barclays showing the CAPE ratio for 26 countries.

U.S. CAPE data has been freely available for some time but I’ve yet to find historical CAPE data for other countries.

The Barclays chart offers a nice visual of the data by country. 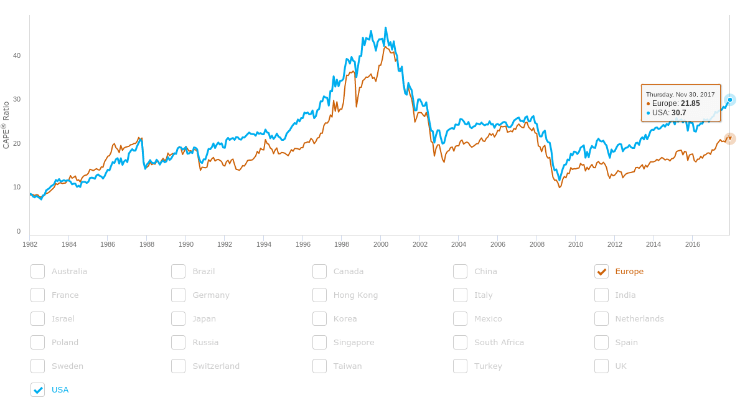 But more importantly, you can download the data…and it’s monthly.

For most of the countries, the data set only goes back to 1982. For a few, it’s even shorter — Brazil goes back to 2011. Still…it’s better than nothing.

So what does the chart say about the U.S. market valuation?

Since the mid ’90s, the CAPE ratio has spent much of its time above its historical average. That makes it harder to gauge how overvalued it might be today.

It’s safe to say the market is not undervalued.

I also don’t think we can call it a bubble yet. But the ingredients are there. The combination of higher stock prices and higher interest rates would make it easier to slap the B word on this thing.

Or some wild event that no one’s anticipating could cause a meltdown. Or nothing could happen.

So I’m not betting on either direction (I secretly hope for lower prices), but…with the current sentiment and momentum, I wouldn’t be shocked by a market melt-up.

If we’re going to end this market cycle with a boom — like so many people seem to want — instead of a whimper, then euphoria is the one thing missing to reach the last stage.

Jeremy Grantham, in his latest missive, believes we’re headed in that direction:

I recognize on one hand that this is one of the highest-priced markets in US history. On the other hand, as a historian of the great equity bubbles, I also recognize that we are currently showing signs of entering the blow-off or melt-up phase of this very long bull market.
…
So let’s start by looking very hard at all the great bubbles of the past, searching for useful guides to the future. The classic examples are not just characterized by higher-than-average prices. Price alone seems to me now to be by no means a sufficient sign of an impending bubble break. Among other factors, indicators of extremes of euphoria seem much more important than price. Ben Graham, as quoted two quarterly letters ago, said that as far as he could see no bubble had ever broken (by 1963) without being accompanied by signs of real excess such as those found in 1929. Two months ago, Robert Shiller also made the point (in the Sunday New York Times) – as I will do – that not nearly enough signs of euphoria were yet present to make this look like a late-stage bubble. (Although in my opinion they have finally begun to pick up in the last two or three months.)… So when he held his fire this time on the issues of a market crash, as I have done, waiting for more evidence, I took considerable comfort. After all, for a major investment bubble to burst it must first form, and this one has been very slow to do that, at least until recently.

Of course, he lays out his case over 13 pages. None of it guarantees euphoria kicks in, but it’s enough of a possibility to prepare for…mentally at least.

If you really feel the need to act, Grantham offers some advice, which I mostly agree with:

What I would own is as much Emerging Market Equity as your career or business risk can tolerate, and some EAFE. I believe each of these, especially Emerging, has more potential than most think (as noted in my recent piece in GMO’s 3Q 2017 Letter).

I’d add: Don’t rule out the U.S. market entirely. All in or all out is a terrible strategy. Owning some U.S. — less than before — will capture any possible melt up while leaving you less exposed to the possibility of a meltdown. And should this actually come to pass, you’re better off not trying to time the rise and fall because you’ll more than likely end up being too early or too late.

Source:
Grantham: Bracing Yourself for a Possible Near-Term Melt-Up