In The Little Book of Behavioral Investing, James Montier relates a story by Paul DePodesta, of Moneyball fame, in the 16th chapter of the book.

That chapter also happens to be a shortened version of the 2008 research piece that Seth Klarman refers to in the last post.

DePodesta’s story weaves together casinos, baseball, and the importance of a good process. It begins with him playing blackjack in Vegas:

Many years ago I was playing blackjack in Las Vegas on a Saturday night in a packed casino. I was sitting at third base, and the player who was at first base was playing horribly. He was definitely taking advantage of the free drinks, and it seemed as though every twenty minutes he was dipping into his pocket for more cash.

On one particular hand the player was dealt 17 with his first two cards. The dealer was set to deal the next set of cards and passed right over the player until he stopped her, saying: “Dealer, I want a hit!” She paused, almost feeling sorry for him, and said, “Sir, are you sure?” He said yes, and the dealer dealt the card. Sure enough, it was a four.

The place went crazy, high fives all around, everybody hootin’ and hollerin’, and you know what the dealer said? The dealer looked at the player, and with total sincerity, said: “Nice hit.”

I thought, “Nice hit? Maybe it was a nice hit for the casino, but it was a terrible hit for the player! The decision isn’t justified just because it worked.”

Casinos have a natural advantage thanks to their process. They survive by offering games of chance that are ever so slightly tilted in their favor. They’ve built their business on a process that will win out over thousands of spins of the roulette wheel, rolls of the dice, or pulls of the slot machine.

Time is a key ingredient to their process.

In the short term, the casino will lose on some of those spins, rolls, or pulls. They fully expect that a few patrons will beat the odds and come out ahead. A casino’s process is built on looking “wrong” in the short term while being “right” in the long run.

Because of that, an intelligent gambler would recognize the odds are against them and not even play.

And then there’s blackjack.

As Ed Thorp would uncover, blackjack is the mathematical exception. In a perfectly rational world, every gambler would know Thorp’s simple rules, follow them to the letter, and come out ahead, assuming they play long enough.

Mr. “Hit on 17” shows the real world is hardly rational.

It also shows that people make the wrong decision all the time and get lucky. And worse, they and others celebrate it as the correct choice because the outcome worked in their favor. When things are going well, I must be doing things right. Isn’t that how it goes?

DePodesta provided a matrix to help explain this: 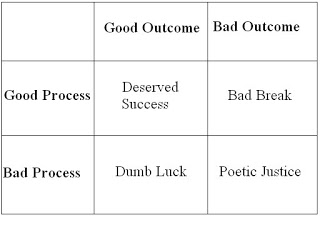 We all want to be in the upper left box — deserved success resulting from a good process. This is generally where the casino lives. I’d like to think that this is where the Oakland A’s and San Diego Padres have been during the regular seasons. The box in the upper right, however, is the tough reality we all face in industries that are dominated by uncertainty. A good process can lead to a bad outcome in the real world. In fact, it happens all the time. This is what happened to the casino when a player hit on 17 and won. I’d like to think this is what happened to the A’s and Padres during the post-seasons.

As tough as a good process/bad outcome combination is, nothing compares to the bottom left: bad process/good outcome. This is the wolf in sheep’s clothing that allows for one-time success but almost always cripples any chance of sustained success — the player hitting on 17 and getting a four. Here’s the rub: it’s incredibly difficult to look in the mirror after a victory, any victory, and admit that you were lucky. If you fail to make that admission, however, the bad process will continue and the good outcome that occurred once will elude you in the future. Quite frankly, this is one of the things that makes Billy Beane as good as he is. He is quick to notice good luck embedded in a good outcome, and he refuses to pat himself on the back for it.

At the Padres, we want to win every game we play at every level and we want to be right on every single player decision we make. We know it’s not going to happen, because there is too much uncertainty… too much we cannot control. That said, we can control the process.

Investors get into a lot of trouble confusing dumb luck with deserved success. There’s nothing wrong with having some luck. The problem is when we confuse it with skill. And similarly, confusing bad luck with a bad decision.

Unlike Mr. “Hit on 17”, we should judge decisions independent of the outcome. That’s not the easiest thing to do, especially in investing when a bad outcome produces real financial losses.

The first step is accepting that any investment process is imperfect. It will not produce good results every single time. A good process, that exploits edges, delivers bad breaks sometimes but will win out if given enough time.

Enough time is key. The role of good behavior — patience, discipline, fortitude — in this, can’t be understated. We have to stick it out through the bad breaks to get the long-term desired results.

Then we have to be humble enough to be critical of those decisions whether things are going well or not. James Montier, in his book, sums it up like this:

Focusing on process seems to lead to better decisions.

Unfortunately, focusing on process and its long-term benefits won’t necessarily help you in the short term. During periods of underperformance, the pressure always builds to change your process. However, a sound process is capable of generating poor results, just as a bad process can generate good results. Perhaps we would all do well to remember the late great Sir John Templeton’s words, “The time to reflect on your investing methods is when you are most successful, not when you are making the most mistakes, ” or indeed Ben Graham’s exultation, “The value approach is inherently sound … devote yourself to that principle. Stick to it, and don’t be led astray.”