The 2017 version of the Credit Suisse Global Investment Returns Yearbook is out and available for download. The Yearbook, for those who don’t know, is a great resource for historical returns nerds like me. It takes a long view of market returns from 1900 to today for five asset classes and 23 countries.

The available Yearbook is only the summary version but it still has 60 pages worth of great info and charts like this:

At the beginning of 1900 – the start date of our global returns database – virtually no one had driven a car, made a phone call, used an electric light, heard recorded music, or seen a movie; no one had flown in an aircraft, listened to the radio, watched TV, used a computer, sent an email, or used a smartphone. There were no x-rays, body scans, DNA tests, or transplants, and no one had taken an antibiotic; as a result, many would die young.

Mankind has enjoyed a wave of transformative innovation dating from the Industrial Revolution, continuing through the Golden Age of Invention in the late 19th century, and extending into today’s information revolution. This has given rise to entire new industries: electricity and power generation, automobiles, aerospace, airlines, telecommunications, oil and gas, pharmaceuticals and biotechnology, computers, information technology, and media and entertainment. Meanwhile, makers of horse-drawn carriages and wagons, canal boats, steam locomotives, candles, and matches have seen their industries decline. There have been profound changes in what is produced, how it is made, and the way in which people live and work.

The next two charts show how that relentless innovation has changed markets between then and now. The benefit of all that innovation is a more diverse market for the U.S. and U.K. compared to 1900. 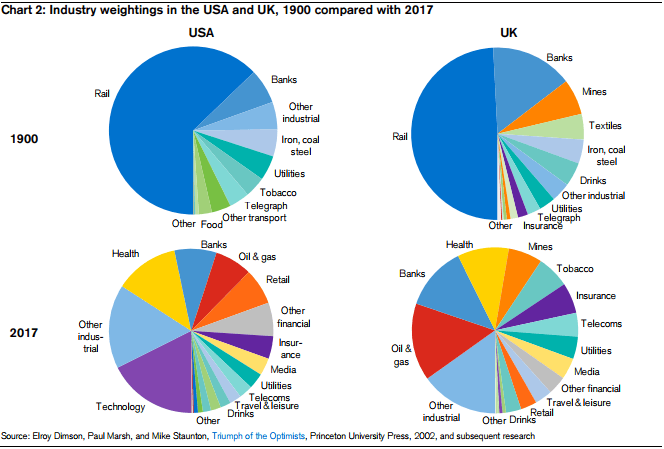 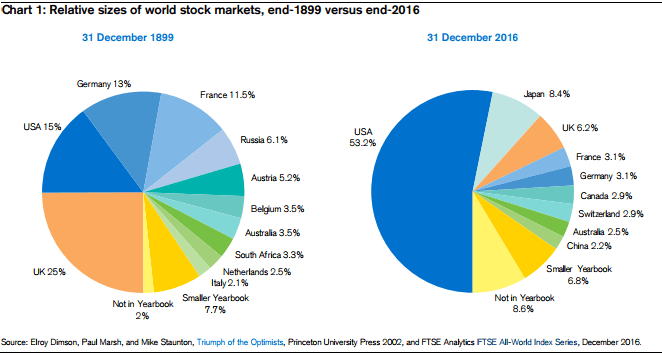 I’ve only glanced at the Yearbook so far. If you’re into this sort of thing, grab a copy and check out some of the other material there too.

Two of Munger’s writings, the Great Recession Parody and an Opinion Piece Draft, were handed out at the end of the DJCO Annual Meeting. Sign up at the Library (it’s free!) to grab both.

Also, Buffett’s annual letter to shareholders should be released tomorrow i.e. Saturday morning. You can grab it at the Berkshire website.