2017 has been a ho-hum year for the markets. Yes, returns were great all around. A quick glance at Morningstar’s Index Performance shows a sea of green YTD. But…

The juxtaposition of a volatile political environment and a carefree market best sums up 2017. If you ever wanted proof that markets are apolitical, this was it. I’ll spare you my political hot take (I’m way too cynical anyway).

The markets, however, are open season.

Barring some cataclysmic event, 2017 will go down as the least volatile year in market history. And the market will end the year very positive – the S&P 500 is up 21% so far (international and emerging markets stocks saw an equally great year).

Had you asked me at the beginning of the year where we were in the cycle, I’d say middling. U.S. stocks weren’t cheap but they weren’t expensive either and opportunities were available. There was just enough worry in the market to keep the excitement at bay.

We were eight years removed from the ’08 crash but S&P 500 returns were positive every year averaging annual double-digit returns over the period. If 2017 ended today, here’s what it would look like. 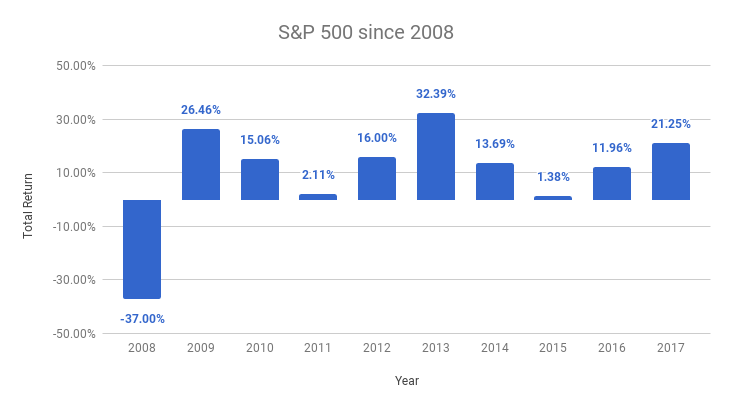 Good performance like that – however rocky – gets people’s attention even in the shadow of the financial crisis.

I believe this year’s performance, with the lack of volatility, was enough to push sentiment significantly higher. Nothing shifts investor sentiment faster than the appearance of “easy money.”

The risk is that investors look at this year and the rest of those returns and think U.S. stocks are less risky than before (the same could happen with international and emerging stocks too).

So money gets moved around. They now own fewer bonds, fewer foreign stocks, and more U.S. stocks in an effort to capitalize on that recent performance. And unbeknownst to them, their portfolio becomes less diversified and riskier.

I find it hard to believe that the great returns we’ve seen in the S&P 500 will continue for an extended period of time. Eventually, something comes along that snaps these streaks. Whether it’s 2018, 2019, 2020…that’s the big question.

But sentiment also drives investors to make costly mistakes. Because it’s also possible that some unknown force (crypto crash, unexpected rate hike, higher inflation, a certain investigation, elections, North Korea, or something else) is the catalyst for the next market loss.

My anecdotal observations – from a value screen I run – have shown a lack of undervalued opportunities in the U.S. over the past five or six months. That tells me that most U.S. stocks are in the range of fairly priced to expensive. And on a relative basis, international and emerging markets are still cheaper than the U.S (less cheap than they once were).

So I’m being more cautious and keeping my expectations low.

My goal – like every year – is to be patient, stick to my process, wait for opportunities, and not let sentiment screw that up.

In the meantime, I’ll continue reading (my goal is more books this year) and sharing what I run across via posts and/or the Library (over 80 pieces added since August).

This will be my last post for 2017. It’s been an interesting, fun year. I’m sure 2018 will bring its own unique surprises.

I want to wish everyone a Happy Holidays and prosperous New Year! See you in 2018!