The South Sea Bubble got its name from the South Sea Company. Its soaring stock price generated an enthusiastic buying spree in the early 1700s but the company is only part of the story. Hundred of smaller companies created around the same time kept the bubble inflated.

Between 1719 and 1720, numerous joint-stock companies were formed to take advantage of investor enthusiasm. A handful were legitimate concerns in insurance. Some were based on new innovations like “Puckle’s Machine Gun” and different fishery projects.

The majority were schemes to take advantage of investors’ ignorance. Some of the wilder concerns involved “extracting silver from lead,” “trading in human hair,” “a wheel for a perpetual motion,” and “a subscription advertised, and actually opened, for an undertaking, which shall in due time be revealed.”

Somehow, investors ate it up.

But the directors of the South Sea Company had a problem. They needed to prop up their stock and saw the smaller issues as competition. They wanted a monopoly on investor capital. They reasoned that if investors dumped their money into these new companies, no money would be left to pump up South Sea stock.

The South Sea directors pushed for the Bubble Act, which made it illegal to create new joint-stock companies without royal approval and banned existing companies from activities not stated in their charter. Not quite happy with the results, they also pushed to have companies operating outside the Bubble Act prosecuted and shut down.

It was enough to spook investors. The two largest insurance companies were the first to collapse and set off the panic. At its peak in July 1720, South Sea stock traded around £1,000. It was below £200 by December 1720. Most of the small issues disappeared. The Bubble Act hastened the South Sea Company’s demise.

The South Sea directors failed to realize that the high price of their stock made it impossible for the masses to participate. Something was needed to close the gap.

Enter the smaller issues. They were “affordable” much like the penny stocks of today. And their price action drew in people who never had invested before. The masses saw an opportunity to get rich quickly and took it. Those small issues became a gateway for many to buy South Sea stock. Little did they know that what they were buying was worthless.

The entire episode was recorded in “Anderson’s History of Commerce,” originally published in the late 1700s. The entry for 1720 — the peak of the South Sea Bubble — paints an interesting picture of the experience (edited for easier reading):

From morning till evening, the dealers therein, as well as in South-Sea stock, appeared in continual crowds all over Exchange-alley, so as to choke up the passage through it. Not a week day passed without fresh projects recommended by pompous advertisements in all the newspapers, thereby swelling enormously, directing where to subscribe to them… Some of the obscure keepers of those books of subscription, contenting themselves with what they had got in the forenoon by the subscriptions of one or two million, (one of which the author particularly well remembers) were not to be found in the afternoon of the same day, the room they had hired for a day being shut up, and they and their subscription books never heard of more… Periods of quality of both sexes were deeply engaged in many of them, avarice prevailing at this time over all considerations of either dignity or equity; the gentlemen coming to taverns and coffee-houses to meet their brokers, and the ladies to the shops of milliners and haberdashers for the same ends.

Any impudent imposter, while the delusion was at its greatest height, needed only to hire a room near the alley for a few hours, and open a subscription book for somewhat relative to commerce, manufacture, plantation, or some supposed invention, either newly hatched out of his own brain, or else stolen from some of the many abortive projects, of which we have given account, in former reigns, having first advertised it in the newspaper the preceding day, and he might, in a few hours, find subscribers for one or two million, and in some cases more, of imaginary stock.

Yet many of those very subscribers were far from believing those projects feasible — it was enough for their purpose that there would very soon be a premium on the receipts for those subscriptions — when they generally got rid of them in the crowded alley to others more credulous than themselves… The first purchasers of those receipts soon found second purchasers, and so on, at still higher prices, coming from all parts of the town, and even many from the country. And so great was the wild confusion in the crowd in Exchange-alley, that the same project, or bubble, has been known to be sold at the same instant of time 10 percent higher at one end of the alley than at the other end. Amongst those many bubbles, there some so barefaced, and palpably gross, as not to have so much as the shadow of any thing like feasibility. The infatuation was at length so strong, that one project was, in the newspapers, advertised thus: for subscribing two millions to a certain promising or profitable design, which will hereafter be promulgated…

These instances, out of hundreds more that might be produced, are sufficient to display the frenzy of the time — when the taverns, coffee-houses, and even victualling-houses, near the Exchange were constantly crowded, and there was known to be much extravagance therein. The very advertisements of those bubbles were so many, as to fill up two or three sheets of paper in some of the daily newspapers for some months. Yet, all men were not infatuated — and one advertisement in a weekly newspaper well enough burlesqued the madness, in the following strain. “At a certain (sham) place, on Tuesday next, books will be opened for a subscription of two millions, for the invention of melting down sawdust and chips, and casting them into clean deal boards without cracks or knots!”

We shall as a useful warning to posterity, here exhibit a more complete catalogue than any we have seen, of the stocks, subscriptions, projects, or bubbles, of this unparalleled time, with their highest prices in Exchange-alley, before the fatal foire facias had (like the touch of Ithuriel’s spear) reduced them all to their proper size and value! 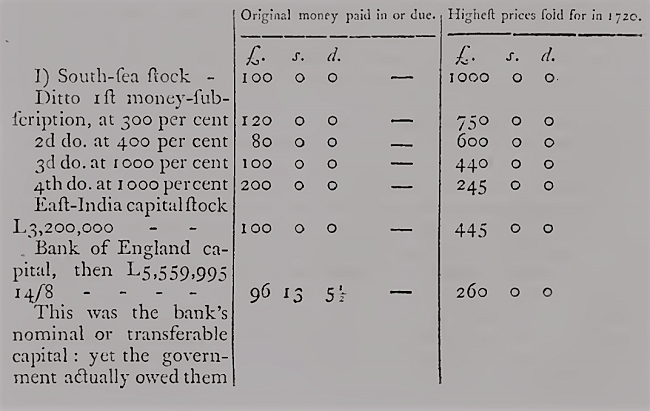 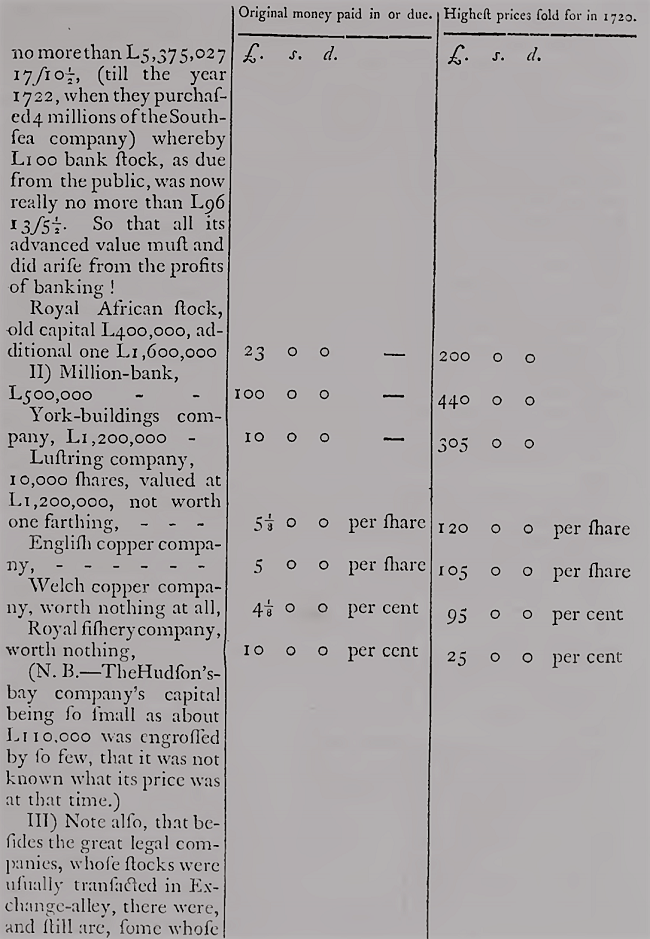 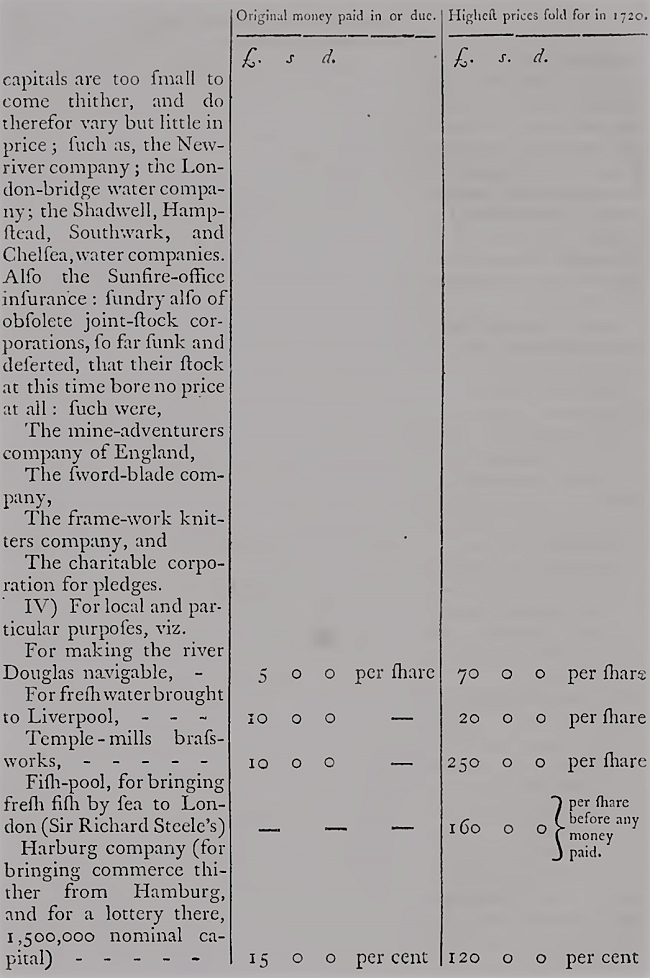 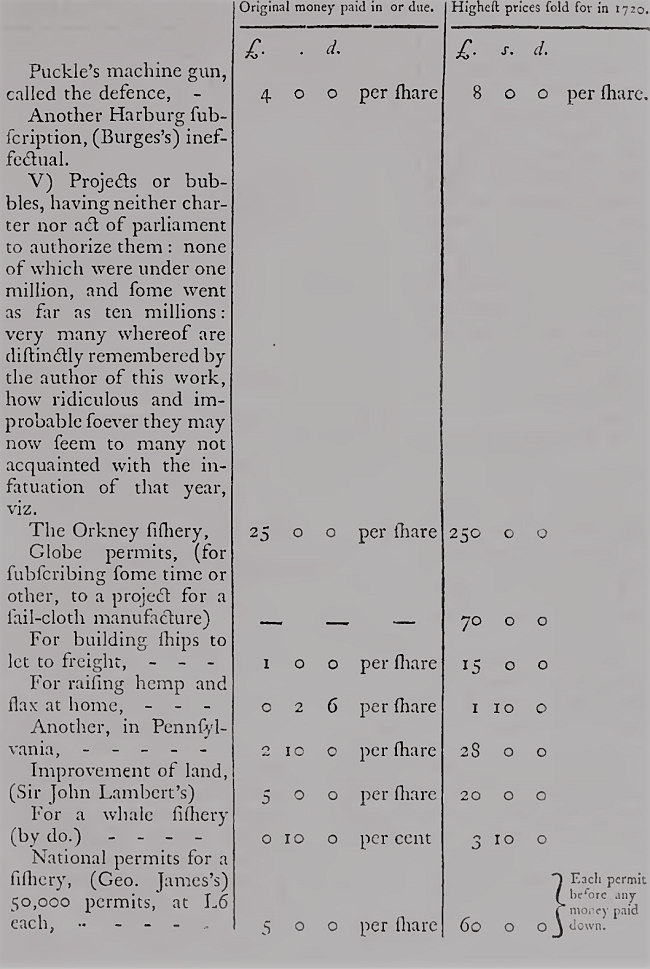 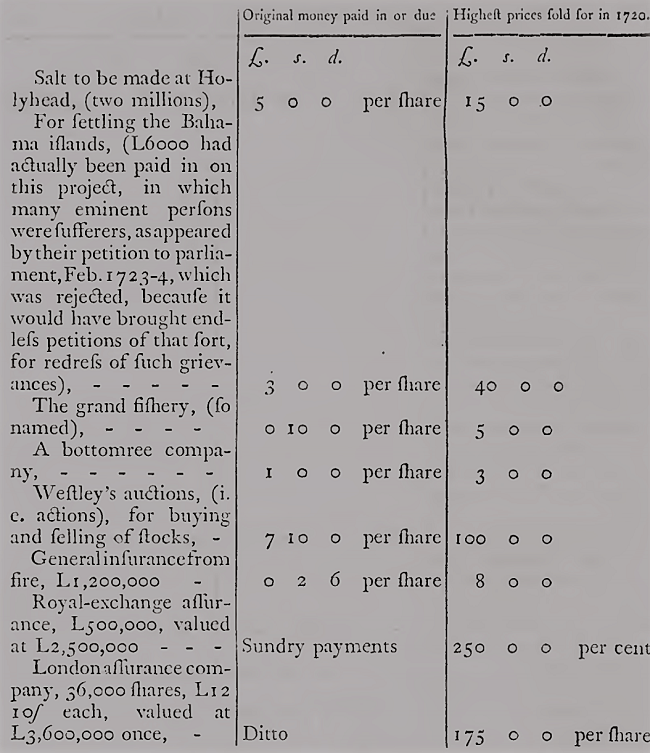 Some of these foregoing bubbles, we may see, were sold at above six times the money paid in on them — others very near as high, and all shamefully and madly raised. It would be endless to hunt for the prices of many more, which were mere embryos of a few days, though they drew in many unwary persons to their undoing. 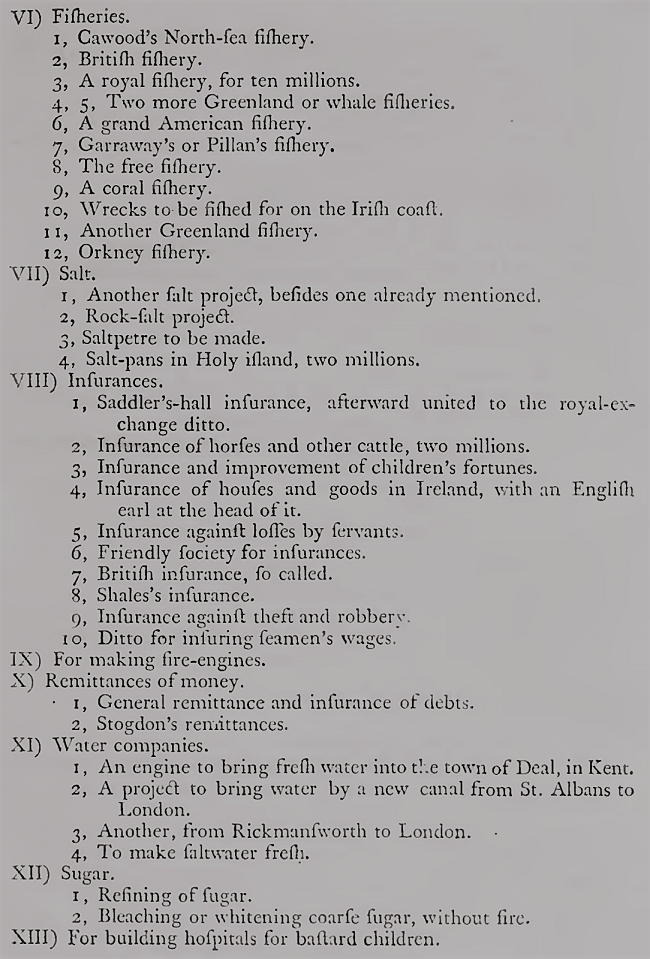 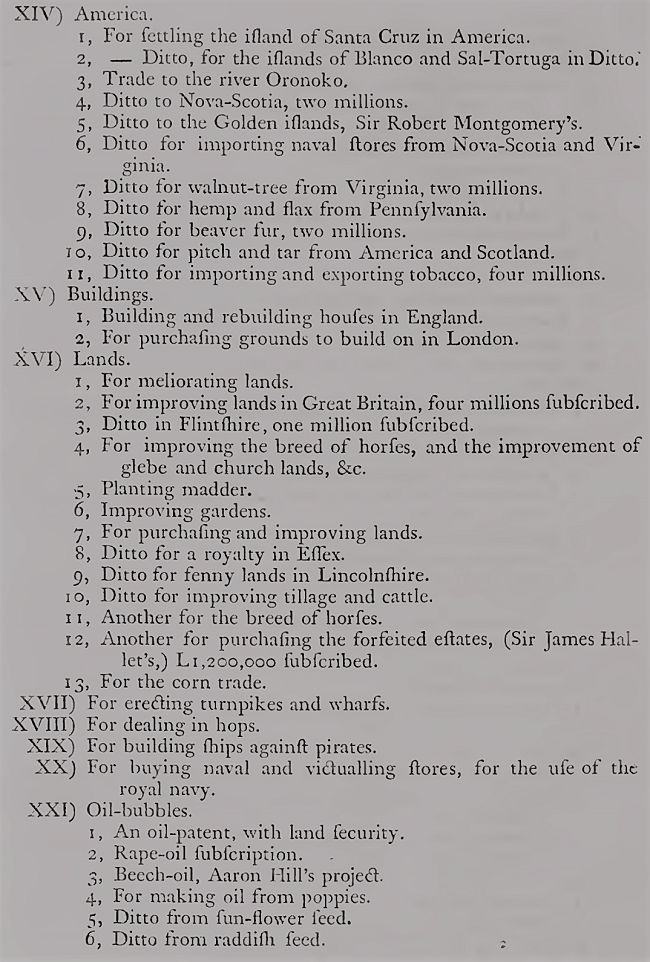 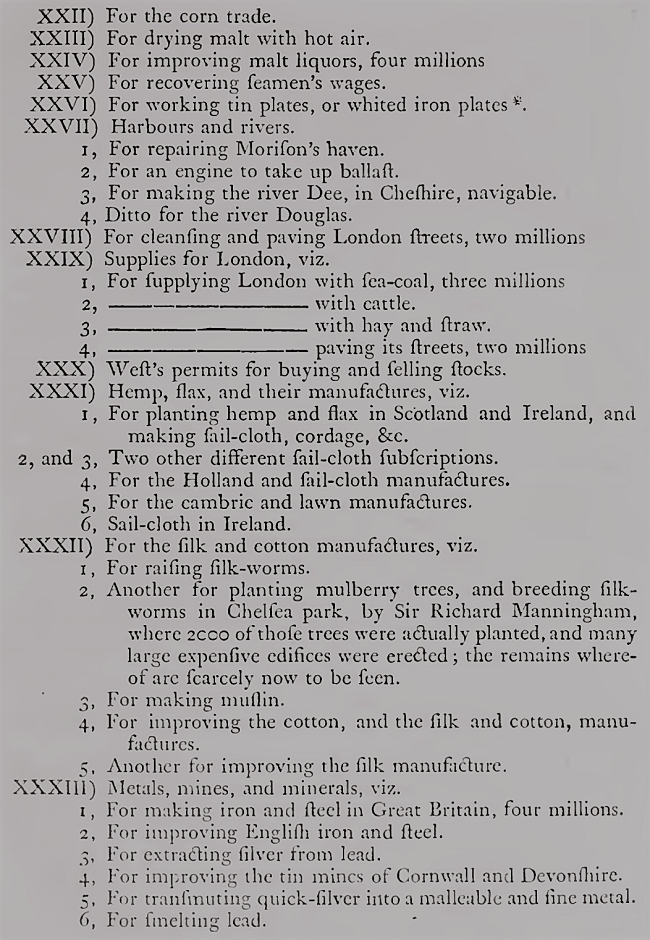 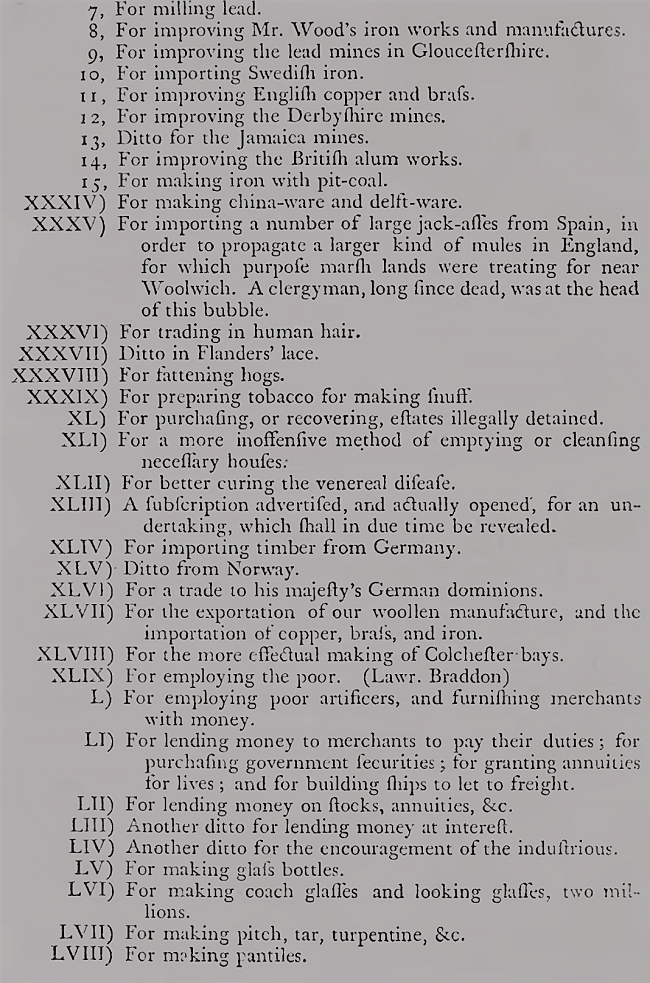 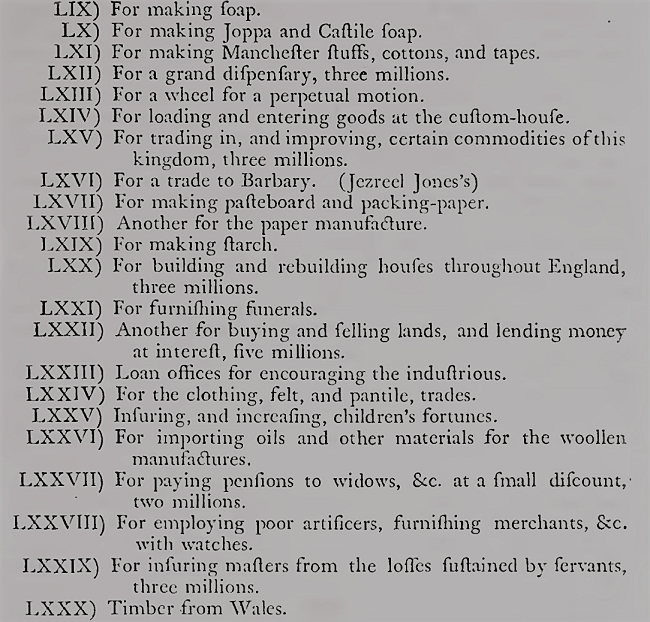 Although this be the largest collection of the bubbles of this year, yet I am persuaded there are some omitted, which I have not been able to recollect — some may possibly think this collection of them too prolix — yet I apprehend, that to many readers they may be a curiosity, and to posterity an useful momento; and it is even possible, that out of so many as considerably above 200 such abortive ones, some improving genius may hereafter luckily render some of them practicable and useful; as has been case already with respect to the tinned-plate manufacture. Yet, of all the above numerous projects, only four, properly speaking, exist at present, viz. the two assurance companies, by legal new charter, the York-buildings company, (if it may be said still to exist) and the English copper company, its charter being found legal.

Many of the above bubbles were indeed so nonsensical and absurd, appearing even from their very titles, as it might be imagined could only draw in the most ignorant part of the people. Yet even those had a very considerable run, much money being got and lost by them. And as for the great bulk of them, there were almost incredible numbers of transactions in them daily and hourly, for ready money, and mostly at very advanced prices; as may partly be conceived by those whose highest prices we have set down. Moreover, great numbers of contracts were made for taking many of them at a future time; and also for puts and refusals of them, at very high prices… I have seen some hundreds of contracts registered, according to act of parliament, at very extravagant prices. And it is much to be lamented, that persons of high rank and dignity placed themselves at the head of many of those even illegal projects; so great was the infatuation of this time…

It was apprehended by many thinking people, that the general infatuation might last till winter, when, it was imagined, it would insensibly subside of itself. But the earnestness of the South-Sea junto to obtain the foire facias brought it sooner to an issue, though very differently from what they assuredly expected. The publication of it by authority, in the London Gazette, instantly struck so general a panic amongst the conductors of all the undertakings, projects, or bubbles, that the suddenness as well as greatness of their fall was amazing. York-buildings stock, for instance, fell at once from 300 to 200; and in two days after, neither it nor the other three undertakings, expressly named in the foire facias, had buyers at any price whatever.

The more barefaced bubbles of all kinds immediately shrunk to their original nothing — their projectors shut up their offices, and suddenly disappeared — and Exchange-alley with its coffee-houses were no longer crowded with adventurers, many of whom having laid out their substance in those airy purchases, now found themselves utterly undone; while, on the other hand, such as had dealt in them to great advantage, became extremely shy of owning their gains. This state of things, however calamitous it might appear, was but the prelude to the grand calamity which soon ensued by the fall of South-Sea stock and subscriptions…

The greatest mistake of the South-Sea managers concerning those bubbles was their belief that their traffic obstructed the rise of South-Sea stock; whereas, on the contrary, it was quickly found, that the trade in them was assisting in keeping up the price of South-Sea stock — for, very many of the lower people, not being at first able to purchase South-Sea stock, ran greedily into the bubbles, and even into smaller shares or parts of them; and, having gained confidently therein, they very often came afterward into South-Sea stock and subscriptions. And thus those lesser currents or rivers were a constant supply to the great South Sea; but this the managers did not perceive till it was too late.

Related Reading:
England’s First Market Bubble: The Mania of 1692
The Common Traits in Every Bubble