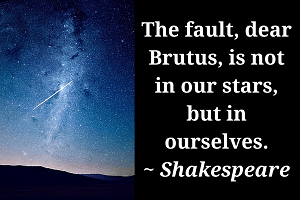 It’s safe to say Buffett and Munger came through, as usual, with a wealth of information in this year’s Berkshire letter. Before I break down the letter into the many select quotes and lessons, there is a greater lesson throughout.

As expected Buffett spent a good portion of the letter discussing his own imperfection. Despite being the greatest investor ever, he does make mistakes. He freely admits his failures for the world to see. This regular dose of humble pie is a recurring trait among great investors.

The fact Buffett still remembers his mistakes decades later, says more than the rest of the letter. I’d bet he spends more time reworking those mistakes in his head, then he does studying his successes.

I can’t say the same for the rest of us. The theme of recurring mistakes seems to have won out. It’s much easier to ignore them or make excuses instead of facing the person in the mirror. If you take anything away from the 2014 letter, take Buffett’s focus on his mistakes, finding where he went wrong, and how he could have done better.

And don’t forget to take the rest of the free lessons in the letter too.

He praised his early investment process – using Graham’s cigar-butt strategy – as his best returns ever, but quickly criticizes it as too short term focused and unscalable. In other words, buying fair businesses at wonderful prices is a decent way to invest but a terrible way to build a business.

Most of my gains in those early years, though, came from investments in mediocre companies that traded at bargain prices. Ben Graham had taught me that technique, and it worked. But a major weakness in this approach gradually became apparent: Cigar-butt investing was scalable only to a point. With large sums, it would never work well.

Yet, his early strategy probably prepared him better than any other for his transition to wonderful businesses at fair prices. You get a good sense of what an average business is, by spending a decade digging through financial statements of average businesses. It also reinforced his discipline for great prices, as it did with See’s Candy and the deals during the financial crisis.

Periodically, financial markets will become divorced from reality – you can count on that…zip up your wallet, take a vacation and come back in a few years to buy stocks at cheap prices.

As Ben Graham said many decades ago: “In the short term the market is a voting machine; in the long run it acts as a weighing machine.” Occasionally, the voting decisions of investors – amateurs and professionals alike – border on lunacy.

I mention this because cash has multiple uses that get overlooked – as an asset and a safety net.

Unexpected problems pop up at the worst of times. There are a lot of places you can stash cash for an emergency. Most are terrible choices when you need the money immediately. Cash on the other hand is easy to get and spend. Since emergencies tend to pop up on rare occasions, its easy to look at that emergency money and expect more from it, like a bigger return or a new toy. As Buffett points out:

In our view, it is madness to risk losing what you need in pursuing what you simply desire.

Cash is also the most underrated asset in investing. Buffet uses it almost perfectly, mostly due to his process, but also because of his conservative nature. When he can’t find a wonderful business he does nothing. He doesn’t lower his standards. He waits knowing Mr. Market will eventually go crazy.

A certain segment of the financial sphere built a model reliant on the falsely branded idea that volatility is risk and duped decades of investors into believing it along the way. Buffett consistently attacks this view in many of his letters. And rightly so.

Stock prices will always be far more volatile than cash-equivalent holdings. Over the long term, however, currency-denominated instruments are riskier investments – far riskier investments – than widely-diversified stock portfolios that are bought over time and that are owned in a manner invoking only token fees and commissions. That lesson has not customarily been taught in business schools, where volatility is almost universally used as a proxy for risk. Though this pedagogic assumption makes for easy teaching, it is dead wrong: Volatility is far from synonymous with risk. Popular formulas that equate the two terms lead students, investors and CEOs astray.

If the investor, instead, fears price volatility, erroneously viewing it as a measure of risk, he may, ironically, end up doing some very risky things.

Volatility is only risky if you sell after a price drop only to watch the price rise later. You get hit with a double whammy – self induced permanent loss and opportunity cost.

The financial crisis is the example he uses where many investors sold near the bottom, sought “safety in bonds”, only to watch the stock market climb three fold. We have a tendency to think current conditions will last forever (or longer then they ever do).

Many people pictured the stock market falling endlessly. It’s just too bad the stock market rises more often then it falls. The chance it would continue to fall after ’08 was very small (even then, the odds shrink if losses stretch into multiple years). In other words, you have a better chance of seeing a higher market after a crash. Most people failed to see the long term possibilities because they were too caught up in one moment.

I think it’s safe to say Buffett believes in the American business and the power their stocks have on your long term investing performance. He doesn’t hold the same regard for bonds and other assets that don’t protect your purchasing power (ie. inflation) nearly as well.

The unconventional, but inescapable, conclusion to be drawn from the past fifty years is that it has been far safer to invest in a diversified collection of American businesses than to invest in securities – Treasuries, for example – whose values have been tied to American currency. That was also true in the preceding half-century, a period including the Great Depression and two world wars. Investors should heed this history. To one degree or another it is almost certain to be repeated during the next century.

For the great majority of investors, however, who can – and should – invest with a multi-decade horizon, quotational declines are unimportant. Their focus should remain fixed on attaining significant gains in purchasing power over their investing lifetime. For them, a diversified equity portfolio, bought over time, will prove far less risky than dollar-based securities.

He gives his usual stern reminder about general investing sins to avoid:

Active trading, attempts to “time” market movements, inadequate diversification, the payment of high and unnecessary fees to managers and advisors, and the use of borrowed money can destroy the decent returns that a life-long owner of equities would otherwise enjoy. Indeed, borrowed money has no place in the investor’s tool kit: Anything can happen anytime in markets. And no advisor, economist, or TV commentator – and definitely not Charlie nor I – can tell you when chaos will occur. Market forecasters will fill your ear but will never fill your wallet.

And finally we come full circle on where to look first when dealing with investing mistakes:

Decades ago, Ben Graham pinpointed the blame for investment failure, using a quote from Shakespeare: “The fault, dear Brutus, is not in our stars, but in ourselves.”

Buffett typically mentions several books in his letters. If he mentions it, it’s worth reading.

Finally, he mentions a good financial story worth reading about Jimmy Ling in D Magazine (link to the story).

This is just a sampling of what is in the letter. I purposely left stuff out because it was too focused. Anyone interested in a little bit of business history, accounting, insurance, float, capital allocation, conglomerates, or Munger’s blueprint to build your own Berkshire should read the letter yourself – 2014 Letter (PDF).