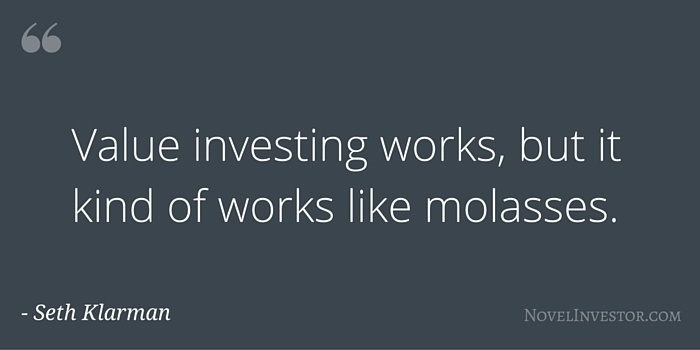 Last year I highlighted a lecture Seth Klarman gave to a Columbia MBA class back in 2010. The video was posted on Youtube at the time, but since then it’s been made private for some reason. Because of that, I thought I’d share all my notes from his presentation.

Seth Klarman’s primary focus is capital preservation. He builds from that with these principles.

Absolute not Relative Returns or Measuring Against the Market

I really don’t understand why most people benchmark themselves against the market. It seems to me that a sort of intellectual clarity to say, ‘A client gave me money so I have cash. And to be provoked to part with the cash, I ought to have an idea that I’m going to do better than the cash.’ Now think about that. I can keep an absolute barrier from doing dumb investments. If I have a relative barrier, it basically says ‘The whole markets overvalued, I’ll buy the least overvalued crap.’ And I think that’s a sound principle.

So even though virtually everybody is measured against the market. When Warren Buffett was running his old partnership, he measured himself and his success against the market…That over a long period of time, the market will perform a certain amount. Probably a little bit higher than cash. And we want to beat that too. But I still think to keep your intellectual clarity of how you’re thinking about deploying money, you would not feel good buying stocks at 30x, when the market’s 35x – as if that was some kind of bargain – when you know in the long run, stocks will go to 12x or 15x.

People tend to be more focused on relative performance in the short term.

Bottom Up, Not Top Down

Most investors are lulled into this idea that top down actually matters.

If you know the economy will grow X% over the next several years, it doesn’t correlate to stock market success. Nobody has a successful track record investing top down. There are too many variables to account for and to be right on. Klarman gives an example of betting on a currency falling:

Then you have to translate that concept into a time frame, a magnitude, and then specific industries that might be affected, companies that might be affected, in order to put on your position. So you got to be right about a lot of these things and you have to be early. Because if you figure it out, correctly somehow, and it all happens but everyone got there first, price matters.

Focus on Risk before Return

Risk is not beta. Risk is not volatility. Volatility…is a wonderful thing. Because if you buy a bargain, and there’s a lot of volatility, it becomes a better bargain. You can make more money. Volatility helps you.

Volatility is not correlated to risk. Value is something that correlates to risk. In the sense that, if the price you pay is higher than its value, you have risk. If the price is lower, you don’t.

We think about risk as the chance of losing.

Klarman looks for bets that are heavily skewed in his favor, but aware he can be wrong. He uses oversized bets only on the really compelling cases. He’s obsessed about risk and understanding the investment – what are they really betting on, is it simple or complicated, what if multiples change – to the point of being conservative. He knows they can’t avoid all risk.

His response to people on clients paying him to hold cash:

They’re not paying us to hold cash. They’re paying us to steward their money frugally and sometimes that means you can’t buy bargains. There’s no reason to think that today’s opportunity set is the only one you’ll ever see.

If we can’t make money unleveraged, we’d rather go out of business.

The risk of leverage is that it’s like drowning in a pond that, on average, is one foot deep.

The average of all the worst outcomes may not seem bad but there’s still a chance of losing everything – see LTCM.

I’m a student not only of the markets but I also think of the competitive environment. In some sense, if you know what everyone else is doing, it helps you understand what you’re doing right, doing wrong, to learn from them, and you can also figure out what ways you might get better.

Each of us are risk averse people.

People generally want to invest their money with limited risk and a good return.

On the Finance Industry

The financial industry is built around asset gathering, not performance.

The world has a relative performance orientation. If you beat the market or you beat your peers, you will gather assets, even if you lose money doing it.

Because assets are relatively sticky, people want to be deliberately mediocre. The benefit of swinging big, of trying hard to do well, always involves the risk of doing really not well. And that’s a risk most asset gatherers don’t want to take.

When something goes bad, it gets oversold because of that stigma.

Bonds are a wonderful safe instrument in the following context – you get senior securities, you’re first in line, contractual terms, you get interest, you get your principle back, you know when you’re getting those things back, and so there’s an elegance to bonds. The problem is everyone knows that, so they don’t return very much – most of the time.

But when a bond suddenly gets downgraded from investment grade to not…people actually panic or can’t hold the bonds.

Some funds can’t own lower grade bonds. They’re forced to sell even if there are no buyers.

Selling has to happen. Buying may or may not happen, but doesn’t have to.

High-grade bonds have limited upside and unlimited downside, meaning the upside is getting paid interest and principal at maturity, the worst case is losing everything.

Mindless selling can drive mispricing in stocks simply due to changes in an index.

Think about an index fund. If a stock is in an index, something like 10% of the market has to own it, because that’s how much the indexing activity is in the U.S. for say the S&P. If the stock gets kicked out of the S&P 500, 10% of the company has to be sold.

If the stock is already hated, the price will most likely fall lower. Other products of mindless selling:

The Question Every Investor Needs to Answer

What’s your edge? Klarman’s answer: Having clients that want him to focus on the long term.

Referenced: What Works in Investing by Tweedy Browne