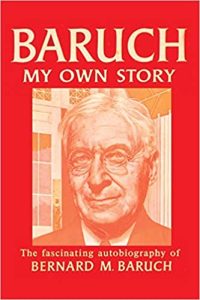 My Own Story is the first volume of the autobiography of Bernard Baruch. Known as the Lone Wolf, Baruch amassed a fortune on Wall Street as a speculator and dealmaker, and later, as a lone investor before entering the public life managing the economic mobilization of WWI and advisor to presidents.