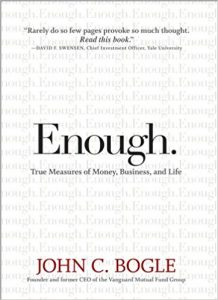 Bogle’s Enough draws from a lifetime of wisdom to reflect on the excesses of a financial system that led to the 2008 crisis and reminds readers of the benefits of a less greedy, long-term, client-first system (society) where success in life is defined by more than just money.