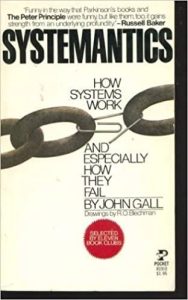 Systemantics humorously describes how complex systems work and why they are far from perfect. The author’s systems axioms, listing the possible flaws and failure points, are reasons why humility and skepticism, rather than confidence, are needed when dealing with systems.