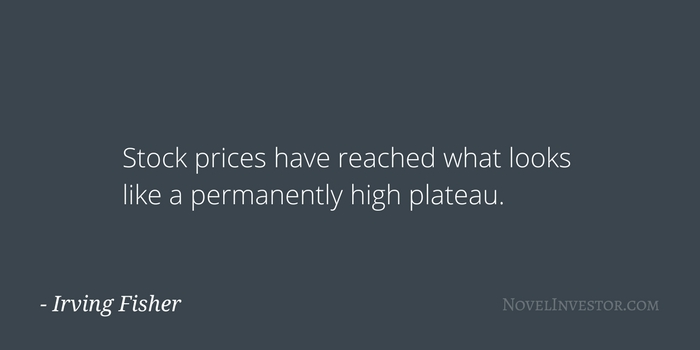 Irving Fisher summed up the attitude of the late 1920s perfectly. His “permanently high plateau” epitomized the euphoria of the time and called for the end of financial cycles.

There was a lot to be excited about.

The ’20s economy offered only brief, mild recessions with exceptional growth and an extended bull market. One new innovation after another led a belief that scientific invention would cure all of life’s problems…and it was right around the corner.

And new financial “innovations” – investment trusts (new for the U.S.) and buying on margin (investors and trusts could buy stocks for 10-20% down with the other 80-90% paid back after selling for a tidy profit) – made it easier for average people to profit from the stock market.

In the heat of it all, some of the smartest financial minds, business leaders, and politicians were certain the 1920s brought about a new economic age.

“This time is different,” they thought. Market cycles were over. There would never be another panic or crash again. Recessions, if they happened at all, would forever be shallow and end quickly.

When October 1929 hit, it didn’t deter their thinking either. In their mind, it was a trivial event with all the prosperity that lay ahead.

Their mistake was thinking it would last forever.

The quotes below are a collection of predictions from those leaders recorded from 1927 to 1931:

There is no reason why there should be any more panics. — Magnus Alexander, President, NICB

There will be no interruption of our present prosperity. — Myron Forbes, President Pierce Arrow Motor Co. – Jan. 1

There is no cause for worry. The high tide of prosperity will continue. — Andrew Mellon, Secretary of the Treasury – Sept.

We are only at the beginning of a period that will go down in history as the golden age. — Irving Bush, President, Bush Terminal Co. – Nov. 15

I do not feel that there is any danger to the public in the present situation. Money is now being lent in Wall Street by people who never lent it before. As long as the people remain enthusiastic and interested the market will hold up. We must remember that today the United States is doing half the world’s business and will continue to do so. Who can compete with us? — Charles Schwab, Chairman, Bethlehem Steel Corp. – March 5

This is truly a new era in which formerly well-established standards of value for securities no longer retain their old significance. — Col. Leonard Ayres, VP, Cleveland Trust Co. – Aug. 15

There may be a recession in stock prices, but not anything in the nature of a crash. Dividend returns on stocks are moving higher. This is not due to receding prices for stocks, and will not be hastened by any anticipated crash, the possibility of which I fail to see.

A few years ago people were as much afraid of common stocks as they were of a red-hot poker. In the popular mind there was a tremendous risk in common stocks. Why? Mainly because the average investor could afford to invest in only one common stock. Today he obtains wide and well managed diversification of stock holdings by purchasing shares in good investment trusts. — Irving Fisher, Economist – Sept. 5

Not only has there been, since 1921, an unusually prolonged period substantially free from so-called crises, or ups and downs, in economic activity representing the so-called business cycle, but even those variations from month to month of the year, which are the result of seasonal influences and which are formerly considered inevitable, have been cut down in extent.

This result must be attributed largely to greater foresight on the part of business men producing and selling commodities as well as on the part of buyers of goods — Robert Lamont, Secretary of Commerce – Sept. 9

Stock prices have reached what looks like a permanently high plateau. I do not feel that there will soon, if ever, be a fifty or sixty point break below present levels, such as Mr. Babson has predicted.

I expect to see the stock market a good deal higher than it is today within a few months. — Irving Fisher, Economist – Oct. 16

I believe the breaks of the last few days have driven stocks down to hard rock. I believe that we will have a ragged market for a few weeks and then the beginning of a mild bull movement that will gain momentum next year. — Irving Fisher, Economist – Oct. 22

In my long association with the steel industry I have never known it to enjoy a greater stability or more promising outlook than it does today. — Charles Schwab, Chairman, Bethlehem Steel Corp. – Oct. 25

The fundamental business of the country, that is production and distribution of commodities, is on a sound and prosperous basis. — President Hoover – Oct. 25

Believing the fundamental conditions of the country are sound and that there is nothing in the business situation to warrant the destruction of values that has taken place on the exchanges during the past week, my son and I have for some days been purchasing sound common stocks. We are continuing and will continue our purchases in substantial amounts at levels which we believe represent sound investment values. — John D. Rockefeller, Sr – Oct. 30

Any lack of confidence in the economic future or the basic strength in the United States is foolish. — President Hoover – Nov.

We probably have three more years of prosperity ahead of us before we enter the cyclic tailspin which has occurred in the eleventh year of each of the four great previous periods of commercial prosperity. — Stuart Chase, Economist – Nov. 1

Things are better today than they were yesterday. — Henry Ford – Nov. 4

To my mind this situation should go no further. — Jesse Livermore – Nov. 13

It looks as if industry would have to begin scraping around to get employees instead of laying off anybody. — Alexander Legge – Chairman, Federal Farm Board – Nov. 22

The progress of America can be halted for brief spaces only, if at all. — Julius Barnes, Chairman NBSC – Dec. 16

Happily, we have now turned our backs upon the events of this unfortunate episode. — Paul Warburg, Federal Reserve Board – Jan.

I see nothing, however, in the present situation that is either menacing or warrants pessimism. During the Winter months there may be some slackness or unemployment, but hardly more than at this season each year. I have every confidence that there will be a revival of activity in the Spring and that during the coming year the country will be make steady progress. — Andrew Mellon, Secretary of the Treasury – Jan. 1

The psychological effect of stock market activities on business is, I think, usually overemphasized… I do not think that the fall in security prices will itself cause any great curtailment in consumption, and the trade figures thus far available seem to bear out this view of the matter. — E.H.H. Simmons, President, NYSE – Jan. 26

As weather conditions moderate we are likely to find the country as a whole enjoying its wonted state of prosperity. Business will be normal in two months. — Robert Lamont, Secretary of Commerce – March 3

While the crash only took place six months ago, I am convinced we have now passed the worst and with continued unity of effort we shall rapidly recover. There is one certainty of the future of a people of the resources, intelligence, and character of the people of the United States — that is prosperity. — President Hoover – May 1

Should the present tendencies of American business continue, normal conditions should be restored in two or three months. — Robert Lamont, Secretary of Commerce – May 20

The worst is over without a doubt, and it has been disciplinary and in some ways a constructive experience. People have learned once again that only work produces wealth. — James Davis, Secretary of Labor – June 28

The general slump in business, in my opinion, has been greatly exaggerated. — R.W. Woodruff, President, Coca-Cola. Co. – August

With the exception of the difficulties that have arisen as a result of the drastic deflation of commodity prices, the business horizon is clear… We all know that the present period cannot long endure. — Richard Whitney, President, NYSE – Sept. 10

We have hit bottom and are on the upswing. — James Davis, Secretary of Labor – Sept. 12

It is perfectly clear that business, on the whole, has ceased the marked decline which was characteristic of a number of earlier months and there are some distinctly encouraging features. — Robert Lamont, Secretary of Commerce – Sept. 22

Our information indicates the probability that the decline in business has substantially if not wholly ceased. — Robert Lamont, Secretary of Commerce – Sept. 26

Looking to the future I see in the further acceleration of science continuous jobs for our workers. Science will cure unemployment. — Charles Schwab, Chairman, Bethlehem Steel Corp. – Oct. 16

As sure as I am standing here, this depression will soon pass and we are about to enter a period of prosperity the like of which no country has ever seen before. — Walter Gifford, AT&T Co. – Nov. 25

We have already weathered the worst of the storm and signs of stability and recovery are already appearing. — Robert Lamont, Secretary of Commerce – Dec. 6

It is difficult to see where any more bad news can come from. — Kurt Jappe, Brookmire Economic Service – Dec. 18

I am not predicting anything. — Charles Schwab, Chairman, Bethlehem Steel Corp. Feb. 7

These really are good times but only a few know it. — Henry Ford – March 15

There undoubtedly will be an appreciable decrease in the number of unemployed by mid-summer. — Robert Lamont, Secretary of Commerce – March 22

The depression has ended. The valley usually runs across six or seven months. If history repeats itself, this means that in July up we go. — Dr. Julius Klein, Assistant Secretary of Commerce – June 9

I am able to propose an American plan to you…We plan more leisure for men and women and better opportunities for its enjoyment. We plan not only to provide for all the new generation, but we shall, by scientific research and invention, lift the standard of living and security of life of the whole people. We plan to secure a greater diffusion of wealth, a decrease in poverty, and a great reduction in crime. — President Hoover – June 15

Radio will prove to be the most important factor in bringing the return of normal business conditions and prosperity in the United States. — Dr. Julius Klein, Assistant Secretary of Commerce – Aug. 15

There have been too many suave statements that reassure nobody, too many empty platitudes, too great a lack of frankness and realism, too much of an attitude of trying to whistle in the graveyard at midnight. — Richard Whitney, President, NYSE – Sept. 17

The depression has been deepened by events from abroad which are beyond the control either of our citizens or our government. — President Hoover – Oct. 18