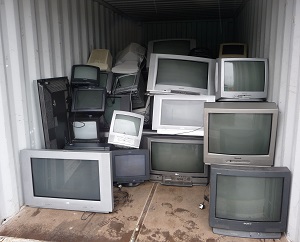 There was time when families would hunker down around the TV to watch the big show of the night. It was a bit more black and white back then, literally, and the only competition was radio.

The business model was simple – consumer get free media in exchange for advertisements during a show. Technology brought a few changes over the decades. The basic business model evolved with it. Cable companies emerged and for a monthly fee you could get more channels and shows. Those networks still got paid from advertising, only now they get a piece of the subscription fees too.

To that end, it’s been successful for the past decade. When given a choice between rabbit ears or the cable monopoly or duopoly, they pay.

Again, changes in technology are disrupting an industry. Digital TV and the internet now provide more options and easier access to streaming TV. Under the right conditions consumers are even cutting the cord and choosing alternatives.

The idea that “things won’t change” got the record companies in trouble. With the streaming TV model, companies should be better prepared this time around. Even so, there will be casualties from those unwilling or unable to change fast enough.

In order to make this argument, we need a little back story. Let’s go back to the late ’90s. The internet is just getting started. A world of possibilities opens up. New sites and companies sprang up overnight. Some had a business model based on file sharing. You remember Napster, the MP3 king, where anyone could get their hands on songs. The record companies refused to adapt and were eaten alive.

File sharing is illegal, but the habits it created changed the way we view media. Basically, instead of buying albums we sought single songs. Apple’s introduction of iTunes fed this habit.

So what does this have to do with TV? TV, in it’s most basic form isn’t changing. It’s still an entertainment medium. But our viewing habits have changed over the past decade. The introduction of smartphones, tablets, and other accessible devices only expedite that change. Here a few important changes:

A recent Deloitte State of the Media Survey puts internet access as the most valuable subscription for 93% of Americans and 50% would pay more for a faster connection.

Much like how cable TV transformed our appetite for more media, the internet is changing how, when, and where we watch it. When drastic changes happen in an industry new competition brings companies to the forefront while leaving others in the dust. You can liken it to changing of the guard. Just look back at the music industry to see the potential upheaval. With that brings opportunity to make money.

This is where the problem lies and opportunity exists. The average broadband speed in the U.S. sits at 7.4Mbps (for Q4 ’12). This is shamefully inadequate. As speeds rise the quality and convenience of online TV alternatives only increase. These alternative choices will see the most growth.

To put this in perspective an old DVD movie ran about 5 GB, HD movies are 25 GB, and the new ultra HD will be 10 TB (that’s 10,000 GB!?). The number of pixels directly correlates to file size and quality. The more pixels you squeeze into a space means more information needs to be sent. But there is good news. The human eye has its limits. Which puts an upward bound on pixels, file size, and internet speed requirements.

A faster internet is the big obstacle controlled by the cable companies. But that is slowly changing, with the Google Fiber service. The new elephant in the room is Samsung’s announcement of 5G mobile. Both would offer connection speeds over 1 Gbps. That’s over 100 times faster than the current average. You could download an HD movie in seconds.

You could say we’re in the first inning of a multi-decade transition to higher bandwidth and an era where we’ll be able to access all our TV needs directly online. A great place to start is with similar companies that profited from the transition from dialup to broadband. In the end, faster internet connections will be the deciding factor.

These are the middlemen in the streaming TV game. The old guards are the cable companies that everyone loves to hate. Their high cash flow is an investor’s dream but the costs of upgrading are huge. Not only will they have to shell out to keep their networks competitive, they could lose half their business in the process.

There’s no love loss when it comes to cable either. Brand loyalty is non existence. More competition only provides more incentive for consumers to change. The success of Netflix, Hulu Plus, and Amazon Prime proves the potential. It’s clear consumers are turning to low-cost streaming alternatives.

How many of these subscribers are double dipping? Given the choice, how many would drop cable for the competition?

The battle over how you access TV is broken down into the old guard, internet providers and the new online streaming media.

At the very least, consumers will still need an internet provider regardless of who provides TV access. Increasing competition should be a concern.

Most of these companies have their hands in other businesses and none are in a rush to upgrade their networks. Comcast, for instance, owns NBC. Verizon and AT&T have cellular networks making the future wireless potential very compelling. The fact that none of these companies are consumer favorites warrants consideration.

Google getting into the internet provider business makes this interesting. Why? Faster internet speeds mean more opportunities for Google (think advertising, Youtube, search, Android) and more competition for everyone else. Don’t expect Google to build out a nationwide network. Too much capital is needed with rough estimates falling in the $140 billion range. It will push the old regime to upgrade eventually.

Most of these online distributors want to build an ecosystem where they are the doorway to all things internet. That includes your TV consumption. It also opens the door for multiple interaction points with the consumer. Amazon Prime is the perfect example. Unlike the cable companies, several of these are consumer favorites with big brand loyalty.

The big three of Google, Apple, and Amazon want customers to have constant internet connection from anywhere. The cable providers are just starting to experience the major disruption caused by tech innovation. It’s only going to increase from here.

More media distributors and a faster internet is a big benefit for media providers. It will still come down to producing great content. Several companies have built a reputation on quality.

Here are a few notes to consider. Two areas still see high live TV viewership are sports and news. Major networks still carry the advantage here, with Disney and its ESPN network at the top of the list.

News Corp. announced a spinoff of its publishing division from its entertainment division sometime in the middle of 2013. The new entertainment company will be renamed 21st Century Fox and include the movie and TV studios, the Fox TV network, and all the Fox cable networks. This should be good news. Keep an eye out for details of the spinoff. Just recently an activist investor started pushing Sony to do the same with its entertainment division. A Sony spinoff is pure speculation at this point.

The cost to upgrade, support, and monitor these networks are the last opportunity. Imagine the cost for Verizon, AT&T, Comcast, Time Warner, Charter, to upgrade and support a video driven internet. These three companies specialize in online video delivery:

Hardware companies like Cisco, Juniper, and JDS Uniphase should benefit from major network upgrades and build out.

We’ve alluded to the wireless potential several times. A faster wireless network provided by mobile carriers would end the need for wired cable internet. The idea may be hard to imagine, but it wasn’t too long ago we thought landline phones were here to stay.

Mobile devices are changing how and where we access the internet. Just think of the possibilities a faster wireless network provides. Mobile tablet users stream 70% more movies than non users. This will continue to increase. Higher connection speeds in the 1 Gbps range will only make it easier. We need to realize that cellular providers are now wireless internet providers in disguise.

As internet connection speeds increase, these companies will become nationwide internet providers. The cable companies should have made that connection already. To that end it opens the door for other opportunities:

There’s a lot of foresight and conjecture here. We know mobile isn’t going anywhere, but how our mobile devices access the internet may change.

With so much potential for change, it’s hard to predict which of these companies will be industry leaders in 10 or 20 years. The high cost of entry certainly offers some protection. The nationwide potential of wireless carriers is compelling. First to market is usually a good sign but it’s no guarantee. The idea of building an ecosystem has its advantages.

What you can’t do, is overlook the customer service potential and brand loyalty around some of these companies. This will probably impact the future of online streaming TV more than anything else.