I spent some time Monday morning watching reactions to the stock market. Thanks to social media, everyone has a front row seat to the greatest sideshow on Earth – investor behavior. Monday did not disappoint.

I have two Twitter accounts, one for the site where I follow a wide range of financial types (broken into groups: top finance, financial advisors, value investors, and financial media. BTW, value investors were the most calm – well done!) and a personal account that follows non-finance folks.

This offers a unique perspective on the crossover between finance Twitter and…well…normal people. I didn’t see any crossover yesterday. The financial account was abuzz. The personal account was as it should be –  devoid of financial news.

To me, that means normal folks either didn’t know or care about what was going on in the market. Hopefully, it was the latter.

Yet, the financial media and finance Twitter did its best to misuse headlines and hashtags to grab your attention. Some went so far as to misname it #BlackMonday.

Black Monday was Oct. 19, 1987. This past Monday was no Black Monday. Comparatively speaking, it was a yawn. Check the charts below to see for yourself.

The media tossed around the Dow’s points fall because big numbers scare people. The actual percent drop was low.

To be fair, Monday would sit as the Dow’s eighth largest point loss in history. 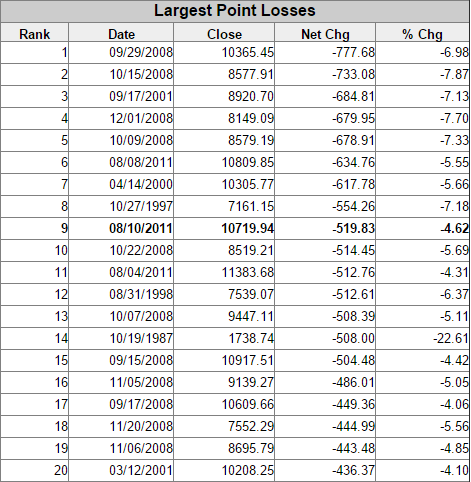 The real Black Monday was the fourteenth worst point loss in history down 508 points. Too bad points are meaningless. One-day point moves will regularly break records as the Dow gets bigger. That’s basic math. It’s also why the media will continue to highlight the Dow over the S&P 500 (the S&P was down 77 points or not scary compared to 588 points).

As a percent move, Monday didn’t come close to the top 20 list. 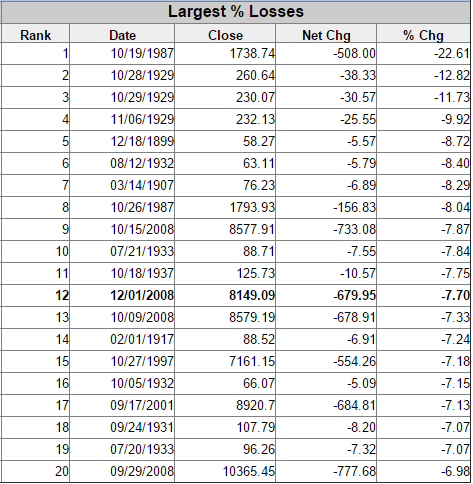 The real Black Monday sits at #1 with a 22.6% loss. That’s a one-day loss! Or a little over six times greater than what we experienced Monday. By the way, the Dow finished 1987 positive, despite the loss. Anyone who panicked back then missed out on the recovery.

All Monday showed was how hyper-sensitive the media and financial folks are to volatility. The market might have recovered from the financial crisis and crash, but it’s obvious a few people haven’t.

I get it. Volatility is exciting, scary, etc. It was fun to watch for a while because we haven’t seen it since 2011. Honestly, I was hoping it would be worse because lower stock prices are a good thing for buyers. All else equal, I want to pay less, not more, for shares. You do too.

But Monday shows the power the financial media and social platforms have to whip up a frenzy. And don’t forget the misguided presidential hopefuls willing to stoke the fire for a soundbite. Well done! (Just think, one of them could be your next president. Can’t wait!)

Luckily, Monday’s reaction was mostly contained. But what happens when it spills over?

Let’s keep this in perspective. The last time the market fell and stayed down was never. Market moves, like Monday’s, will not decide your financial fate. How you react to it will.

So what should you do? Frankly, if you’re listening to anyone from financial media or the political sphere for financial advice, please stop! You’re wasting your money. It might be entertaining, but it’s only noise.

The only thing you should be listening to is the financial plan you created yourself (you do have one right?) or via your advisor. What does your plan tell you to do? Do that. No more, no less.