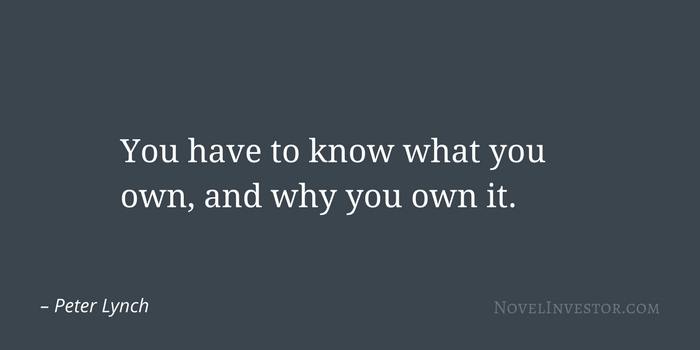 You can add to this to the list of most important things every investor should know.

Know what you own!

Peter Lynch thought that was the “single most important thing” for investors. He quickly followed it up with: know why you own it.

It seems simple enough but how many people do? We have a world of information at our fingertips but I doubt much has changed since Lynch uttered those words over two decades ago.

He rehashed his view again during a speech at a Press Club Luncheon in 1994. I’ll leave a portion of his speech here as a reminder:

And the single most important thing to me in the stock market, for anyone, is to know what you own. I am amazed at how many people own stocks, they would not be able to tell you why they own it. They couldn’t say in a minute or less why they own it. Actually, if you really press them down, they’d say, “The reason I own this is the sucker is going up.” And that’s the only reason. That’s the only reason they own it. And if you can’t explain – I’m serious, if you can’t explain to a 10-year-old in two minutes or less why you own a stock, you shouldn’t own it. And that’s true I think of about 80% of people that own stocks.

And this is the kind of stock people like to own. This is the kind of company people adore owning: it’s a relatively simple company, they make a very narrow, easy to understand product. They make a one-megabit SRAM C-MOS bi-polar RISC floating point data I/O array processor with an optimizing compiler, a 16-dual port memory, a double-diffused metal oxide semiconductor monolithic logic chip with a plasma matrix vacuum fluorescent display. That has a 16-bit dual memory. That has a UNIX operating system, four whetstone megaflop polysilicone emitter, a high band width – that’s very important – six gigahertz double metalization communication protocol, an asynchronous backward compatibility, peripheral bus architecture, four-way interleaf memory, a token ring interchange backplane, and it does it in 15 nanoseconds of capability. Now, if you want a piece of crap like that, you will never make money. Never. Somebody will come along with more whetstones or less whetstones or bigger megaflop or a smaller megaflop. You won’t have the foggiest idea what’s happened. And people buy this junk all the time.

I made money in Dunkin’ Donuts. I can understand it. When there was recessions I wouldn’t have to worry about what was happening. I could go there, people were still there, I didn’t have to worry about low-priced Korean imports. I mean, I just didn’t have – you know, I could understand it. And you laugh. I made 10 or 15 times my money in Dunkin’ Donuts. Those were the kind of stocks I could understand. If you don’t understand it, it doesn’t work. This is the single biggest principle. And it bothers me that people are very careful with their money. The public, when they buy a refrigerator they go to Consumer Reports. They buy a microwave oven, they do that. They ask people what’s the best kind of radar range or what kind of car to buy. They do research. And when they go on a trip to Wyoming, they get a Mobil travel guide or California. When they go to Europe, they get the Michelin travel guide.

People hear a tip on a bus on some stock, they’ll put half their life savings in it before sunset. And they wonder why they lose money in the stock market. And when they lose money, they blame it on the institutions and program trading.
That is garbage. They didn’t do any research. They got a piece of junk. They never looked at a balance sheet and that’s what you get for it. And that’s what we’re being driven to. It’s self-fulfilling. The public does terrible investing and they say they don’t have a chance. It’s because that’s the way they’re acting. I’m trying to convince people there is a method. There are reasons for stocks that go up.

If you own stocks, this should be obvious. When businesses do well, the stock eventually follows.

But if you don’t know what the company does or how well it’s doing or what might trip it up, then the only thing you have to base decisions on is stock price. When the price falls, what’s the chance you hold onto the stock if you can’t answer two simple questions about the company? Not likely.

And this is just as important if you choose to own funds (mutual, index, or ETFs) instead. What do you own? Why do own it? What’s under the hood? How does it fit into your allocation?

You can take this a step further to your asset allocation of choice or strategy, but the point is clear. To give yourself some chance of success, you must put in the effort. Investing is hard enough, why make it harder by doing no work?