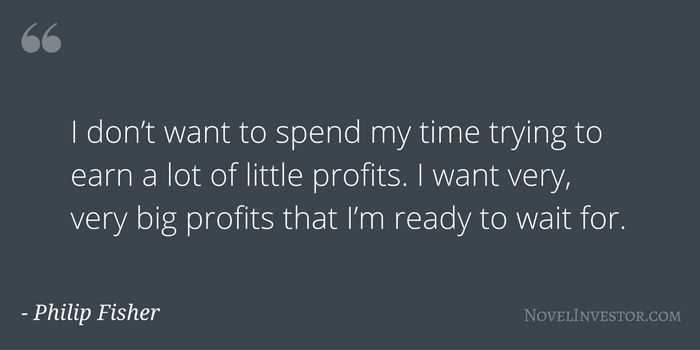 Philip Fisher was a growth investor before growth investing was a thing. He shared his philosophy based around his 15 points in the best seller Common Stocks and Uncommon Profits.

In 1987, he sat down for a rare interview for Forbes. Most of the interview centered around his investing philosophy, which I’ll cover below.

One piece was mildly interesting in a prescient (lucky?) sort of way. Fisher believed the market was expensive and due for a major correction (admittedly, he had no idea when). The interview was published in the October 19, 1987 issue of Forbes, also known as Black Monday. The Dow saw its largest one day decline ever of 22.61%.

Fisher actually explains the difference between his approach and Grahams value philosophy.

There are two fundamental approaches to investment. There’s the approach Ben Graham pioneered, which is to find something so cheap that there is little chance of it having a big decline. He’s got financial safeguards to that. It isn’t going to go down much, and sooner or later value will into it.

Then there is my approach, which is to find something so good – if you don’t pay too much for it – that it will have very, very large growth. The advantage is that a bigger percentage of my stocks is apt to perform in a smaller period of time – although it has taken several years for some of these to even start, and you’re bound to make some mistakes at it. {But} when a stock is really unusual, it makes the bulk of its moves in a relatively short period of time.

The disadvantages of Ben Graham’s approach, as he preached it, is it is such a good method that practically everybody knows it and has picked up the things that meet his formula.

I don’t want to say that mine is the only formula for success. But I think, and I may be conceited about this, that I started my business before the term growth stock was thought of.

He takes a quantitative approach when looking for quality growth stocks.

They are all low cost producers; they are all either world leaders in the fields or can fully measure up to another of my yardsticks, the Japanese competition. They all now have promising new products, and they all have managements of above-average capabilities by a wide margin.

Now people who are interested in growth but who aren’t very sophisticated tend to measure it by how much you spend on R&D. Actually, when bringing on new products, R&D, while important, is less costly than the combination of marketing money, when you’re first introducing those new products, and the high-cost production when you first start to get those new products out but where you haven’t yet come down the learning curve.

The combination of high marketing costs and initial production costs can drag down earnings. On paper, it looks like growth is slowing when, in fact, its just the early stage of a new product cycle. He refers to Raychem as an example:

For a company that had steadily growing earnings before that, this threw Wall Street, with its short-term outlook, for a loop. Now there is great suspicion. Is it really a growth company? To me, it epitomizes a growth company but sells at a price/earnings ratio that doesn’t fully reflect this.

And he believed in sticking to what he knew best.

My own interests essentially are in manufacturing companies that in one way or another – I hate the buzzword “technology” – can expand their markets by taking advantage of the discoveries of natural science.

In other fields, such as retailing and finance, there are excellent opportunities, but I feel this is one where I am more qualified. I think a weakness of many people’s approach to investment is that they try to be jacks of all trades and masters of none.

Fisher prefered a concentrated portfolio with a long term holding period. Most of his returns are the result of a very few stocks performing exponentially better than the rest.

I have four core stocks that are exactly the thing I want. They represent the bulk of my holdings. I have five others in much smaller dollar amounts that are potential candidates to enter this group. But I’m not sure yet. If I were betting today, I’d bet on two and not on the other three.

Each decade up to this one – there hasn’t been time to work it out for the Eighties – I have found a very small number of stocks, 14 in all, starting with 2 in the Thirties, that over a period of years made a profit for me of a minimum seven times the funds I put in and a maximum of many thousands of times my investment.

Now I have gone into about three to four times as many additional securities in which I’ve made more money than I’ve lost. I’ve had losses, in tow cases as high as 50%. There also have been a number where I have made or lost 10%. That’s almost the cost of being in business. But there are lots of cases where a stock has gone down moderately, and I’ve bought more, and it’s paid off for me enormously.

These efforts were necessary to week out the 14 where I have made the real gains. I’ve held those 14 from a minimum of 8 or 9 years to a maximum of 30 years. I don’t want to spend my time trying to earn a lot of little profits. I want very, very big profits that I’m ready to wait for.

It is just appalling the nerve strain people put themselves under trying to buy something today and sell it tomorrow. It’s a small-win proposition. If you are truly a long-range investor, of which I am practically a vanishing breed, the profits are so tremendously greater. One of my early clients made a remark that, while it is factually correct, is completely unrealistic when he said, “Nobody ever went broke taking a profit.”

Well, it is true that you don’t go broke taking a profit, but that assumes you will make a profit on everything you do. It doesn’t allow for the mistakes you’re bound to make in the investment business.

Funny thing is, I know plenty of guys who consider themselves to be long-term investors but who are still perfectly happy to trade in and out and back into their favorite stocks.

Some years ago I was the adviser to a profit-share trust for a large commodity dealer. I bought for them – I think the stock has been split 15 times since then – a block of Texas Instruments at $14 a share. When the stock got up to $28, the pressure got so strong (“Well, why don’t we sell half of it, so as to get our bait back?”) I had all I could do to hold them until it got to $35. then the same argument: “Phil, sell some of it; we can buy it back when it gets down again.”

That is a totally ridiculous argument. Either this is a better investment than another one or a worse one. Getting your bait back is just a question of psychological comfort. It doesn’t have anything to do with whether it is the right move or not.