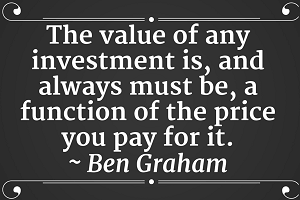 The past few years has seen a growing discussion around how to best value the market. More recently, the argument turned toward just how overvalued is the market and what does it mean? I thought I’d try to answer those two questions.

Several market valuation tools have become more common since the crisis. I use the term loosely because none of the valuation tools are 100% accurate and some are terribly inaccurate. In reality, people want a market timing tool. Keep that in mind while reading further.

One of the more popular tools is the CAPE ratio (Cyclically Adjusted PE Ratio) or Shiller PE named after it’s creator, Robert Shiller. Shiller is a Yale professor who realized the market is hardly efficient, wanted a way to measure that inefficiency, and wrote a book about it appropriately named Irrational Exuberance.

Shiller recently added his two cents to the valuation discussion via twitter:

Unfortunately, Shiller’s two cents don’t help answer the questions above. So I thought I’d look at where the CAPE ratio started previous years and show how the S&P 500 performed afterwards, which should put the current valuation into context.

The tables below break down the CAPE ratio based on where it stood on January 1 of each year from 1926 to 2015 with the following average S&P 500 performance (with dividends) over different time periods. CAPE data is from Multpl.com.

There were twenty-six periods were CAPE started the year between 10 and 15. The last time was in 1988.

There were twenty-two periods where the CAPE began the year between 15 and 20. the last time was 2009.

Let’s focus on generalities because the tables show CAPE isn’t perfect in predicting future returns. Instead, you’re dealing with a range of possible outcomes and what’s more likely to happen.

Nothing new there, except investing is full of general rules that get broken from time to time. While the rule is the most likely outcome, there are instances where it doesn’t happen.

The CAPE ratio, while imperfect, has a better use as a long term expected returns tool. Simply, CAPE is a poor predictor of short term returns.

Sorry to say, that eliminates it as a market timing tool too. You only have to look at the 1 year and 3 year Highs in the last table, both from 1997 to understand why. The three years starting in 1997 saw the peak of the internet bubble. Just because the market is overvalued doesn’t mean it can’t get more overvalued. In other words, the markets can stay irrational despite high valuations.

I won’t get into the debate of CAPE’s usefulness. It’s an imperfect tool, like all the rest, with one big shortfall.

The historical CAPE average has been creeping higher for any number of reasons – changes in accounting rules, tax code, profit margins, and the make up of the S&P 500 – which may or may not be permanent. This is most obvious when you compare the historical average with the average over the past twenty-five years:

You don’t need to be a genius, or a Yale professor, to see something has changed. You do need to understand that valuation alone isn’t a guarantee that a low market will rise or a high market will fall anytime soon. As the tables show, the market doesn’t always follow the rules. You’ll have to decide CAPE’s usefulness for yourself.