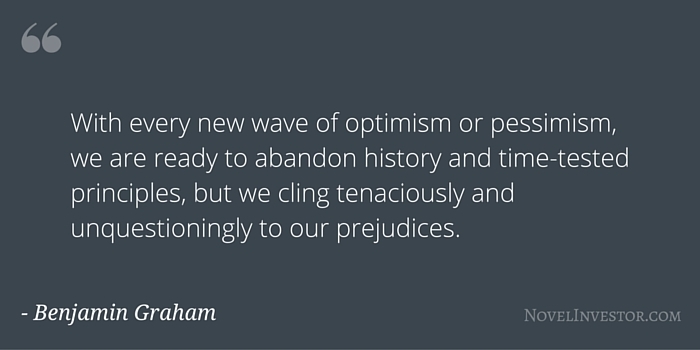 Ben Graham wrote The Intelligent Investor in 1949, arguably the best investing book of all time. In it, he laid the groundwork for value investing and everything you need to be a successful investor.

He separated price from value. He introduced Mr. Market. He added a margin of safety. He even pushed investors to be more businesslike. And he leaves reminders throughout that successful investing is really a battle against human nature.

But tucked in between his broader message is a depth of wisdom you won’t find in other investing books. I thought I’d share a few random bits and quips from the first quarter of the book.

To invest intelligently in securities one should be forearmed with an adequate knowledge of how the various types of bonds and stocks have actually behaved under varying conditions – some of which, at least, one is likely to meet again in one’s own experience.

The underlying principles of sound investment should not alter from decade to decade, but the application of these principles must be adapted to significant changes in the financial mechanisms and climate.

Evidently it is not only the tyro who needs to be warned that while enthusiam may be necessary for great accomplishments elsewhere, in Wall Street it almost invariably leads to disaster.

Obvious prospects for physical growth in a business do not translate into obvious profits for investors.

Our main objective will be to guide the reader against the areas of possible substantial error and to develop policies with which he will be comfortable. For indeed, the investor’s chief problem – and even his worst enemy – is likely to be himself. (“The fault, dear investor, is not in our stars – and not in our stocks – but in ourselves…”)

We have seen much more money made and kept by “ordinary people” who were temperamentally well suited for the investment process than by those who lacked this quality, even though they had an extensive knowledge of finance, accounting, and stock market lore.

We hope to implant in the reader a tendency to measure or quantify. For 99 isssues out of 100 we could say that at some price they are cheap enough to buy and at some other price they would be so dear that they should be sold. The habit of relating what is paid to what is being offered is an invaluable trait in investment.

The art of investment has one characteristic that is not generally appreciated. A creditable, if unspectacular, result can be achieved by the lay investor with a minumum of effort and capability; but to improve this easily attainable standard requires much application and more than a trace of wisdom. If you merely try to bring just a little extra knowledge and cleverness to bear upon your investment program, instead of realizing a little better than normal results, you may well find you have done worse.

A stong-minded approach to investment, firmly based on the margin of safety principle, can yield handsome rewards.

An investment operation is one which, upon thorough analysis promises safety of principle and an adequate return. Operations not meeting these requirements are speculative.

In most periods the investor must recognize the existence of a speculative factor in his common stock holdings. It is his task to keep this component within minor limits, and to be prepared financially and psychologically for adverse results that may be of short or long duration.

In his endevor to select the most promising stocks either for the near term or the longer future, the investor faces obstacles of two kinds – the first stemming from human fallibility and the second from the nature of his competition. He may be wrong in his estimate of the future; or even if he is right, the current market price may already fully reflect what he is anticipating.

To enjoy a reasonable chance for continued better than average results, the investor must follow policies which are (1) inherently sound and promising, and (2) are not popular in Wall Street.

Everyone knows that speculative stock movements are carried too far in both directions, frequently in the general market and at all times in at least some of the individual issues. Furthermore, a common stock may be undervalued because of lack of interest or unjustified popular prejudice. We can go further and assert that in an astonishingly large proportion of the trading in common stocks, those engaged therein don’t appear to know – in polite terms – one part of their anatomy from another. In this book we shall point out numerous examples of (past) discrepancies between price and value. Thus it seems that any intelligent person, with a good head for figures, should have a veritable picnic in Wall Street, battening off other people’s foolishness. So it seems, but somehow it doesn’t work out that simply. Buying a neglected and therefore undervalued issue for profit generally proves a protracted and patience-trying experience. And selling short a too popular and therefore overvalued issue is apt to be a test not only of one’s courage and stamina but also of the depth of one’s pocketbook. The principle is sound, its successful application is not impossible, but it is distinctly not an easy art to master.

The near-complete failure of gold to protect against a loss in the purchasing power of the dollar must cast grave doubt on the ability of the ordinary investor to protect himself against inflation by putting his money in “things”.

It has been an old and sound principle that those who cannot afford to take risks should be content with a relatively low return on their invested funds. From this there has been developed the general notion that the rate of return which the investor should aim for is more or less proportionate to the degree of risk he is ready to run. Our view is different. The rate of return sought should be dependent, rather, on the amount of intelligent effort the investor is willing and able to bring to bear on his task. The minimum return goes to our passive investor, who wants both safety and freedom from concern. The maximum return would be realized by the alert and enterprising investor who exercises maximum intelligence and skill.

These copybook maxims have always been easy to enunciate and always difficult to follow – because they go against that very human nature which produces that excesses of bull and bear markets. It is almost a contradiction in terms to suggest as a feasible policy for the average stockowner that he lighten his holdings when the market advances beyond a certain point and add to them after a corresponding decline. It is because the average man operates, and apparently must operate, in opposite fashion that we have had the great advances and collapses of the past; and – this writer believes – we are likely to have them in the future.

With every new wave of optimism or pessimism, we are ready to abandon history and time-tested principles, but we cling tenaciously and unquestioningly to our prejudices.