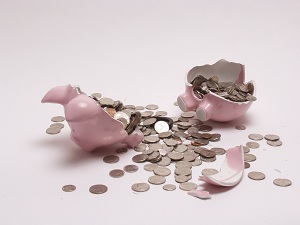 The savings and debt debate has been ongoing since the first loan was created.  With only so much income to spread around, a big decision must be made.  Do you use any extra money to pay off debt or add it to savings?

It’s a fine line which is the right path to follow.  On one side you have the debt first absolutists, the other is the futurist savers and some where in between you’ll find your comfort zone.

The debt first argument, in the savings and debt debate, is an easy one when you compare low savings account rates with high credit card interest rates.  You can’t really argue against it.  Pay off those 15% credit cards.  But what about those other, lower rate loans, like a mortgage, car loan, or student loans?

The anti debt approach is unwavering, debt is evil so it must be eliminated.  By putting savings on hold, you can pay off debt earlier than originally planned, save on interest payments, and live happily ever after.  Once the debt is gone, the idea is to put all that money toward savings.

All of that debt first arguing sounds good, but the savers have a future to plan for too.  The save first crowd has a rebuttal in the savings and debt debate.

The savers bring up a few minor points like an emergency fund, college savings and retirement that shouldn’t be put on hold for several years, while the debt is paid off.  They say, pay the minimum towards debt and make sure you’re protected for the future.  Once you have that emergency blanket, you can look at really paying off debt.

The shaky economy shows us how important it is to have some emergency savings built up.  The savers don’t want to give up retirement savings, and the advantages that compounding brings, just to pay off debt a year or two early either.  The biggest example is not taking advantage of employer matched retirement contributions.  It’s hard to argue against free money.

The math may tell us to pay debt first, but life isn’t always as cut and dry as a math problem.  Things change and being ready for that can make a big impact.  If an emergency popped up tomorrow, would you rather dig into your savings or pull out that credit card?

There is something to be said about a balanced approach to savings and debt.  It reinforces the importance of both.  Getting into the habit of saving and lowering your debt level is a good thing.  The savings will at least offer some insurance when the next emergency shows up, without having to increase your debt.

Despite what either side believes, your comfort level is all that matters.  It’s about being smart with your money so you don’t stress yourself out any further.  The key is to find the right balance that makes you sleep better at night.  If that means you lean towards one side of the debate over the other, so be it.  Just make sure you understand the consequences of both saving and debt reduction.

If I had my choice, it’d lean toward savings.  Sure, I agree that some debt should be paid as quickly as possible like high interest credit card debt.  But all debt?  I don’t think so.  And a rainy day fund sounds like a nice idea.